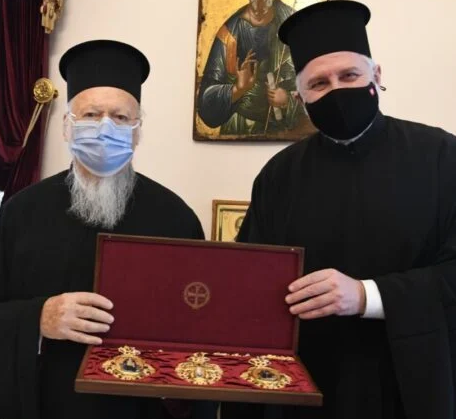 The Greek Orthodox Archdiocese, under the yoke of which many American Orthodox groan, is guilty of a new heresy which can be expressed in two parts. This most recent heresy is what one might call “Religious Covidism”. In my tentative definition for our Orthodox context, Religious Covidism is the unspoken contention that preservation of one’s physical health supersedes the need for one’s spiritual healing.

After a year and a half of an epidemic whose severity has been blown way out of proportion to the actual threat to public health, the hierarchs have made it clear that their devotion to the sacramental life of the Church as handed down by Tradition is only secondary to a fastidious prevention of even the slightest threat of contagion by the novel coronavirus. For a time last year they shut down the parishes entirely. Even when they allowed them to open up, they demanded that each parish follow the strictest of all metropolitan or municipal restrictions. Inconvenient obstacles were put in the way of regular participation in the Divine Liturgy by parish councils who obediently followed all of the guidelines imposed. Access was severely limited to the life-giving sacraments of confession and absolution, and to the medicine of immortality which is the Eucharist. Initiation into the Faith by way of the rites of baptism and chrismation were long delayed. Weddings were rescheduled. By putting up these roadblocks to the mysteries, our hierarchs tacitly indicated that their loyalty to the mandates of the local magistrate trumped their faithfulness to Sacred Tradition. My real suspicion is that the hierarchs were afraid of being sued for liability if anyone blamed a local parish when he got sick.

To be sarcastic, you might say, “Who needs a bishop when you have a mayor to protect you?”

Loyalty to the mandates of the local magistrate trumps the requirement of faithfulness to Sacred Tradition.

Without so much as stating it outright, the hierarchs have guided our Church from the standpoint of a truly worldly mentality. These two correlating statements are, I would posit, the New Heresy of the Greek Orthodox Church. As if the longer-standing heresies and schisms to which I have heretofore spoken were not already enough for us to deal with, now we have this new heresy. Wonderful. Sadly, some other Orthodox jurisdictions are not exempt from guilt, so it is not just GOARCH’s fault.

Only time will tell whether the hierarchs’ draconian measures have actually saved more lives than they have ruined. Since Covid-19 has a recovery rate of nearly 100% for most people, I seriously doubt it. Too many parishioners have stopped coming to services. There have been too many suicides and cases of depression; too many bankrupted retailers and stressed families to think that the bishops’ reflexive actions have done more good than harm. If we think like true Orthodox, heirs of the Church of the countless martyrs who paid for their salvation by sacrificing their lives before ancient magistrates, then we can only be dubious of our present leadership’s wisdom. May God grant them the humility to repent, although I am not going to hold my breath until they do. May God forgive us all for our mutual responsibility for their present offices.

Lawrence B. Wheeler – Originally published at Handwritings on the Wall

NOTE: As an editorial note, we would like to point out that in the state of Florida, Greek Orthodox parishes are still asking everyone 2 years of age and up to wear masks at Divine Liturgy. This is in accordance with a letter from Metropolitan Alexios of Atlanta. The letter, from early August 2021, is still being run in weekly parish bulletins (as of 10/29/2021). Our schools in Florida do not require masks, nor do private businesses. Other Orthodox jurisdictions are unmasked, even the OCA which was almost as bad as the GOA at the height of COVID. In fact, the only place a 2 year-old (or anyone else) in Florida is likely to be forced to wear a mask these days is in the Divine Liturgy at a Greek parish.

Please note in the excerpt below from the Metropolitan’s letter that he considers his first and foremost duty to be the health and safety of his flock. This article is spot on – most hierarchs are completely focused on physical health at the expense of spiritual health. It also appears that even after 19 months of empirical and experimental data to the contrary, that at least some of our hierarchs continue to pretend that masks on toddlers are somehow about “loving your neighbor.”

The post The New Heresy appeared first on Orthodox Reflections.