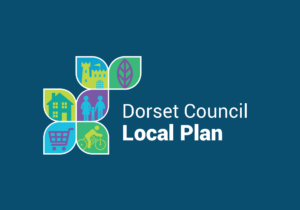 The next steps for the Dorset Council Local Plan

The consultation of the Dorset Council Local Plan has been scrutinised by a working group of elected councillors that is making sure that the project keeps to its objectives.

The executive advisory panel (EAP) is a working group of elected councillors, supported by officers are tasked by Dorset Council’s Cabinet to focus on areas of work to make sure that it is carried out according to the council’s priorities. Any recommendations that the group has have to be agreed by the council’s Cabinet.

The first consultation for the Dorset Council Local Plan took place earlier this year and received over 60,000 comments via the web form, posted paper copies or via email, around 7,000 individuals responded. There was a good cross section of residents from all age groups, from 11 years old to 85 years old.

All the comments are being considered within the framework set by National Planning Policy which informs all planning decisions. We aim to publish the comments on the consultation in July.

The Dorset Council Local Plan contains strategies to shape the area over a 17-year period. These include planning growth in the right places at the right time, maximising the supporting infrastructure secured through development, boosting the local economy, and protecting the high-quality local environment.  Without a plan, and an ability to show that it has a five-year supply of land for development, the council is open to challenge from developers who would then be able to build homes in unplanned locations potentially harming our high quality environment.

During the pandemic the Ministry of Housing, Communities & Local Government (MHCLG) gave guidance that local councils should not delay the production of their Local Plans. Dorset Council took on board this guidance and used a mixture of online and traditional methods to promote the consultation on the Dorset Council Local Plan to make sure that a representative sample of the population responded to the questionnaire. 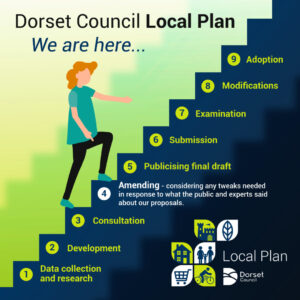 The timeline for the production of the first Dorset Council Local Plan is:

In 2020, the Government published a whitepaper consultation proposing changes to the national planning system. View Dorset Council’s response to this consultation

The draft Dorset Council Local Plan has been prepared with these potential changes in mind, but until it is clear what the Government wants local authorities to do and when these changes will become law.

“There has been a lot of criticism about our Local Plan, but we are making a robust plan for the future of Dorset. It will protect us from unplanned ‘pepper pot’ developments and make sure that the developments are planned with the infrastructure that our residents deserve.

“We are looking at every comment that has been made and looking at whether we can accommodate them within the plan, while still providing an environment for Dorset’s economy to grow to it’s potential.”

Further information on the future growth of the local economy, from ecological surveys, new flood risk maps for Dorset rivers and the environment bill are also being incorporated in the next draft of the plan.

Find out more about the Dorset Council Local Plan

The next steps for the Dorset Council Local Plan