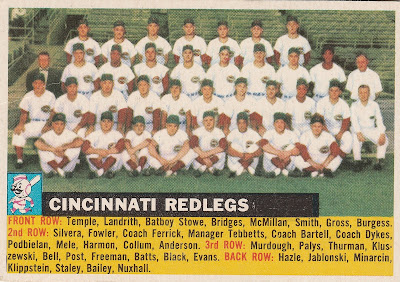 One of the fun things about a completed set is deciding how you want to organize it. I have the 1956 Topps set in a binder, sorted by team, in the same order that the teams finished in the 1955 Standings. In 1955, the Cincinnati Redlegs finished in 5th place in the National League with a 75-79 record. 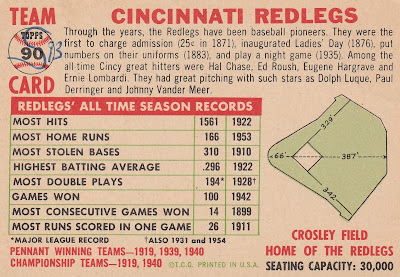 The 1955 Reds (they went by the "Redlegs" from 1951 - 1958 in opposition to the Soviet Union - sort of the 1950's version of "Freedom Fries" in the cafeteria) were a team known for its big bats. Their last World Series appearance came before the second World War, and they'd be waiting until 1961 to get back. The addition of some key pitchers and a future Hall of Famer would vault them into 3rd place in 1956, and they would make a slow and steady climb into the first division after that. Here, they appeared on a NYC based television show "What's My Line?" a 20 questions game for a panel of wiseacres.


The 1956 Topps set would include several players that came to the team mid way through the '55 season, or players that arrived before the 1956 season started, giving a better sense of where they were going, rather than where they had been. Cincinnati is known as the Queen City, even though the name of Cincinnati comes from The Cincinnati Society, a group of revolutionary war veterans. The Society is named after a Roman leader who seized power of the city state in a time of crisis, only to retire to a life of farming once the empire became stable. The Queen City nickname comes instead from a poem by Henry Wadsworth Longfellow, who refers to the city "on the banks of the Beautiful River" as the "Queen of the West." By the 1950s, it was known as much for its Chili as its Architecture, the latter of which also garnered the city the nickname "the Paris of America." 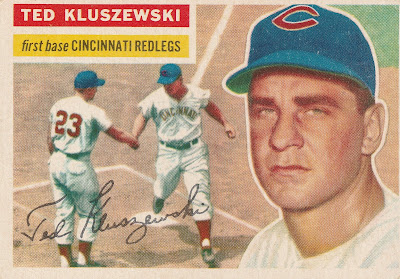 The team's best hitter in 1955 would have been the best hitter for a lot of the National League that year- the hulking slugger, First Baseman Ted Kluszewski. He hit .314 with 47 homers and 113 RBI, while scoring 116 runs himself. His 192 hits led the NL, as did his 25 intentional walks. 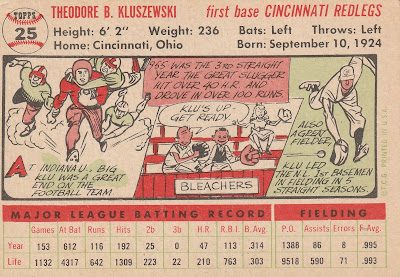 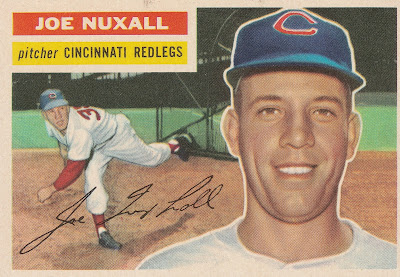 The team's best pitcher in 1955 was a local hero, Ohio born Joe Nuxhall. He led the National League with 5 shutouts, and led the team with a 17 - 12 record over 33 starts. He was also used in relief, notching 3 saves. He would join Ted on the National League All-Star Roster in 1955 and 1956. 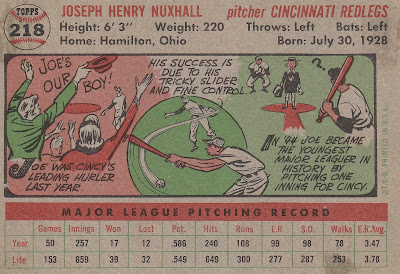 Joe is probably best known outside of Cincy for the two-thirds of an inning he pitched back in 1944. Nuxhall was signed that spring while many able-bodied men were participating in the Second World War, but Joe was not quite old enough to join up. Nuxhall's debut made him the youngest MLB player in history, at just 15 years old. His SABR bio has a good write up of the event, coming in to face a formidable St. Louis Cardinals lineup in the 9th inning of a rout.  That appearance would be his last for 8 years, but he would return to the Reds, and make two All-Star teams. After his playing days were over, Nuxhall was a regular contributor as a broadcaster for Reds games until his death from cancer. 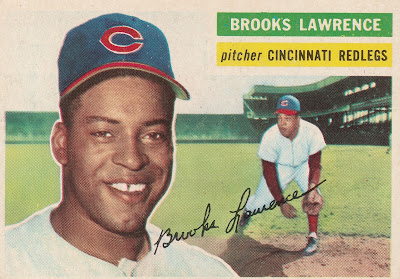 One more Ohio local I wanted to mention, Springfield, Ohio's Brooks Lawrence. Springfield is where my dad grew up and where a good deal of his family can still be found (including my grandma, who is 95!). Lawrence had a much different career trajectory - he was one of the men who served in WWII, earning a Bronze Star for his efforts to repel enemy planes firing on his unit's position in the South Pacific. When he returned home from the war, he went back to school to earn his degree, and played for his college team as well as a local team on weekends. He earned a spot on Cleveland's D league team after showing up to a tryout. He worked slowly through the sometimes still segregated parts of the minor leagues, and nearly decided to give up baseball altogether when Cleveland traded him to a St. Louis farm club a step below the level he had been on. Persistence paid, and he was (along with teammate Bill Greason) the first African-American to play for the Cardinals. He dazzled as a Rookie, winning 15 games. 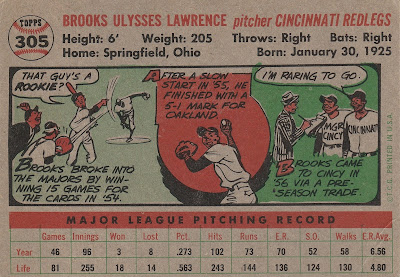 His best season would be 1956, in which he won 19 games and made his only All-Star game. Lawrence was an intellectual, and would often recite his favorite poems at the drop of a hat. One of those was "The Bridge Builder" by Will Allen Dromgoole:


The video above starts with the poem, and the rest is a documentary about an educator who was a contemporary of Brooks Lawrence, who could very well have had similar paths had Lawrence left baseball in the minors. 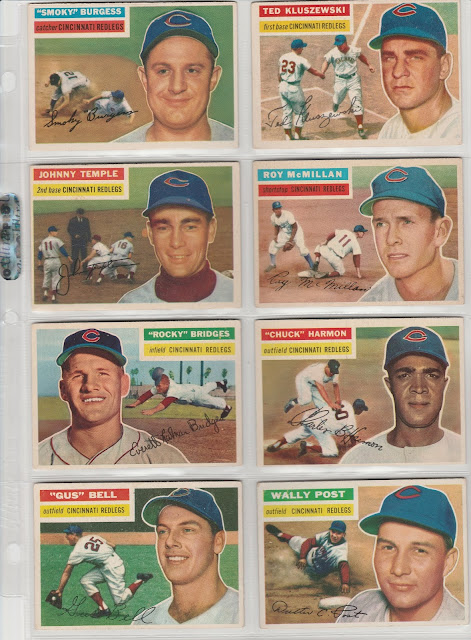 The 1955 Reds were a Big Red Machine in their own right - Kluszewski hit 47 homers, Wally Post had 40, Gus Bell had 27, and Smokey Burgess had 21. The middle infielders were not especially heavy hitters, but they did provide excellent defense. 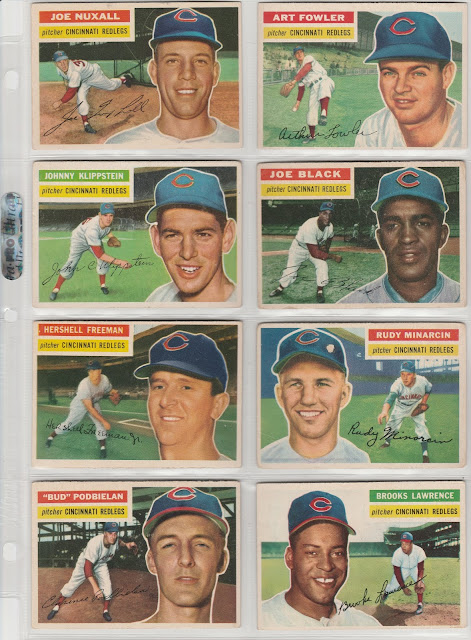 Brooks Lawrence and Joe Black were new additions to the Reds pitching staff, Lawrence as a starter and Black in relief. Hershell Freeman was the best Reds' reliever in 1955, with 11 Saves and a low 2.16 ERA in 92 innings. 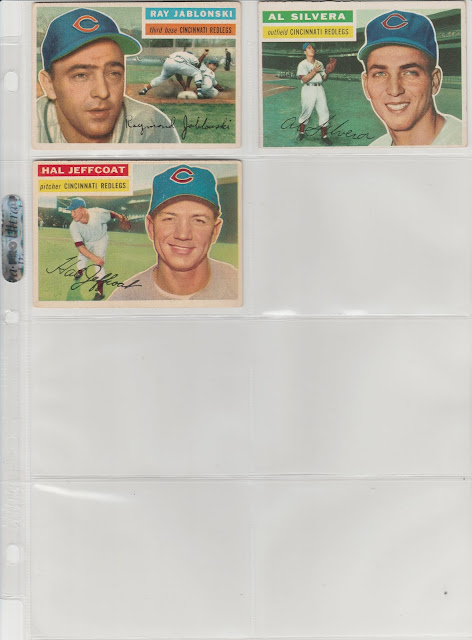 Ray Jablonski and Hal Jeffcoat would become major contributors in 1956 for the Reds, with Jablonski as the everyday 3rd baseman, and Jeffcoat as a Starter and reliever. He had been the Cubs' closer the year before, but served as a swing man with Hersh Freeman notching 17 saves in '56 for the Reds. Frank Robinson is missing from this set, he would be the 1956 Rookie of the Year, hitting 38 homers for the Reds and helping take the team to the next level. In 1961 he would be the NL MVP and the Reds would reach the World Series for the first time in over 20 years.