This week, how about a look back at my still indefinitely on-hold Pulp Fiction Workshop. As part of the rundown on the history of the pulps, I made a quick rundown of at least most of the broader genre categories found on the newsstands of, say, 70-100 years ago, when popular fiction magazines routinely sold in the hundreds of thousands of copies each month. The examples were sourced from two great online resources, The Pulp Magazines Project and the even longer list of titles found at the Luminist Archives, both being places where you can actually read, even download and keep, scans of some of the surviving original pulps. If you’re like me, you may have to take a couple days off work once you start clicking through these treasure troves.

You have been warned.

Not to be confused with traditional mysteries, the pulp version of the contemporary mystery featured either the hardboiled, no-nonsense, shoot from the hip detective or private investigator, or focused on the criminals and the crime itself. Some of these magazines were branded as “True”—and the HBO series True Detective is a nod back to those magazines. How actually “true” those were was in doubt from the get-go, but why split hairs? There were murderers, armored car robbers, cat burglars, hop-heads, and Axis spy rings to crack wide open. The “spicy” detective pulps added a teaspoon’s more sex to the mix and though tame by today’s NC-17 standards, these magazines inhabited the spaces under many an American mattress. Black Mask is widely considered the best of the crime/detective pulps, but there were lots more, from Clues Detective Stories to Thrilling Mystery.

The horror pulps gave us such weird fantasy luminaries as H.P. Lovecraft and Clark Ashton Smith. Though Weird Taleswas the most influential, that magazine quickly found the line between horror and fantasy and went more and more into fantasy while there were loads of competing horror magazines, especially the simply titled Horror Stories and Terror Tales, featuring monsters, ghosts, vampires, werewolves… and some of the most enduring pulp stories.

This is the original pulp genre, from the dime novels of the mid-19th century. Westerns came in all flavors, including romance westerns like Rangeland Romances that were aimed at women, and even territory-specific westerns like North West Romances. As a Seattleite, I should be reading that one! These westerns first presented in the pulps were hungrily slurped up by Hollywood and a new American mythology was created, with just a dash of actual history and a lot of macho wish fulfillment. 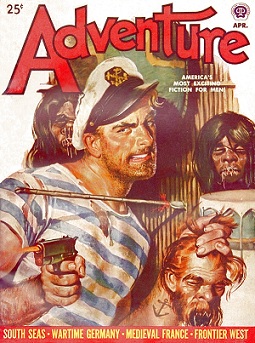 This was the category that could soak up almost all the other genres, as long as a man (and they were almost invariably men) was, well… having an adventure. Mostly this is where you would find tales of being stranded on a deserted island full of savage headhunters, wealthy hermits who hunt men for sport, historical adventures, and attacks by every conceivable species of animal from sharks to weasels. In case you weren’t sure what you were getting, like the horror and western pulps, most were rather unambiguously named, like Adventure or Mammoth Adventure. Under this category sat a few more specialized adventure pulps, concentrating on things like Jungle Stories (one of my favorites) or Sea Stories. These, like the science fiction magazines, hung on while the pulps faded away, morphing into “men’s adventure magazines” then into simply “men’s magazines,” which is an old fashioned name for pornography.

Romance pulps were aimed, just like the Harlequin romances of today, exclusively at women, which was to say middle class white housewives. After all, a girl has to have something to occupy her time while hubby’s away having daring adventures on the high seas or tracking down the Blueblood Killer or, y’know… colonizing Mars. Romances came in various varieties including saucy, thrilling, “true,” and western. But mostly, the operative word was “love.” Code that however you want.

Though Mary Shelley’s Frankenstein, which pre-dates the pulps, is arguably the first science fiction novel, it was in the pulps that the SF genre really took off. In fact, this is where all the first couple generations of great American SF authors started, including Ray Bradbury and Philip K. Dick. It was also the genre that survived—there are still science fiction magazines being published today. Some of the earliest include Wonder Stories, and other favorites like Startling Stories and Astonishing Stories. The Luminist Archives has a whole separate section for SF, fantasy, and “weird fiction.” Honestly, I just sometimes wallow in old science fiction magazines. The nerd love is oh, so very real.

The great sword & sorcery pulp fantasies predate The Lord of the Rings and featured such enduring characters as Robert E. Howard’s Conan the Barbarian. Picked up by Marvel Comics in the 1970s, Conan has kept that pulp fantasy tradition alive through to today. Though fantasy is arguably the world’s oldest genre, the pulps, as they did with science fiction, helped establish the basic lexicon of fantasy archetypes that inform every work of the genre today. Though there’s a lot of crossover in the pulps between what we now consider separate genres—fantasy, science fiction, and horror—magazines like Ten Story Fantasy, Unknown, and the later Fantastic couldn’t have known the sort of cultural force they were helping to unleash. 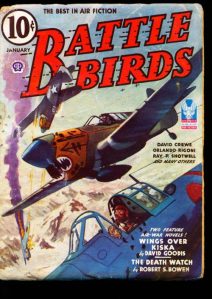 The stories in magazines like Air Wonder Stories were mostly lighter science fiction stories, imagining then-impossible flying machines, but mostly “air” stories were tales of derring-do in the brand new era of aviation and air combat. The war and air combat magazines were on average much less lurid, less “spicy,” than their pulp brothers and sisters and stressed the action and adventure. It might be difficult to believe how many of these there actually were, including Aces, Air Action, and Flying Aces, which spoke to a significant demand—more so than the other war pulps, which kept their action mostly in the trenches.

This is the really lost genre, though we do occasionally see a sports movie come around, or a TV series like Friday Night Lights, but back in the day, sports fans gobbled up stories from generalized collections like Fifteen Sports Storiesto whole magazines devoted to a single sport, mostly boxing with magazines like Fight Stories, but let’s not forget Basketball Stories or Football Stories.

And those are only “the big ones.” Some pulp magazines were super-specialized, others almost uncategorizable, but I have a love for every one of them, warts and all. Have fun!

Link up with me on LinkedIn…

Friend me on GoodReads…

Or contact me for editing, coaching, ghostwriting, and more at Athans & Associates Creative Consulting.

As an Amazon Associate I earn from qualifying purchases.

Look to Athans & Associates Creative Consulting for story/line/developmental editing at 3¢ per word.