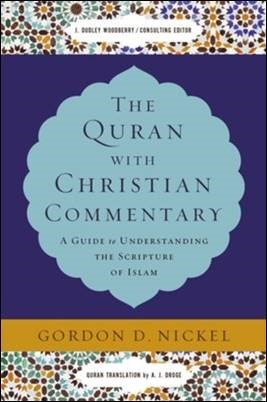 The Quran with Christian Commentary

The following is an excerpt from The Quran with Christian Commentary: A Guide to to Understanding the Scripture of Islam. Copyright © 2020 by Gordon Nickel. Published by Zondervan. Used with permission. All rights reserved.

[Browse the Understanding Islam section in the Bible Gateway Store]

The Quran is the scripture of the Muslim community, revered by Muslims around the world and given authority by them to instruct both faith and life. Its 114 chapters, called sūras, are arranged approximately in order of length from longest to shortest. The entire collection is introduced by a short prayer known as al-Fātiḥa, or “the Opening.”

The contents of the Quran come from the Middle East in the seventh century AD, though scholars do not agree on precisely how or where it came together. The Quran that most Muslims use today reflects a decision of Muslim leaders in Egypt in 1924 to adopt one particular “reading” of the text from among many possible and officially accepted readings.

[Read the Bible Gateway Blog post, No God but One: Allah or Jesus?—An Interview with Nabeel Qureshi]

Salvation in the Quran
by Peter Riddell

Salvation is far less clearly defined as a doctrine in the Quran than in the Bible. Nevertheless, the Quran contains elements that help Muslims prepare for a positive outcome on the Day of Judgment.

Quranic Arabic makes use of the verb najā to express the notion of “deliver” or “save.” The use of this verb is less associated with an expression of hope and more commonly coupled with delivery from punishment for those who follow the divine commands, as well as delivery denied to those who disbelieve.

The verb rarely appears in sūras usually associated with the earliest part of Muhammad’s ministry in Mecca. At this early stage the architecture of quranic doctrine was somewhat in flux; the messenger is believed to have been engaging with and responding to challenges in the marketplace as he preached. The single reference from this period at 70.14 is concerned with a divine rebuke to disbelievers who will be ready to “ransom” (v. 11) family members on the Day of Judgment in order to save themselves, but to no avail. The medieval commentator Ibn Kathīr expands on the quranic idea of salvation in this verse in the following terms: “Even the child that he had who was dearer to him than the last beat of his heart in the life of this world, he would wish to use the child as a ransom for himself against the torment of Allah on the Day of Judgment when he sees the horrors. However, even this child would not be accepted from him as a ransom.”

In chapters seen by Muslims as reflecting the messenger in a later period in Mecca, the Arabic form anjā occurs with increasing frequency. The dichotomy between believers and unbelievers takes shape more clearly in these chapters. At this stage the Quran was issuing both promises of reward and increasingly stern warnings of divine punishment. The concept of deliverance or salvation hinges on several key elements. First, God remains in control of the distribution or denial of salvation. He saves the obedient and leaves others to stray (19.72) or destroys them (21.9). In some cases God predestines some to miss out on salvation (27.57). God’s sovereignty is spelled out clearly, rewarding the obedient and punishing the sinners (7.72, 165; cf. 12.110: “Those whom We pleased were rescued. But Our violence was not turned back from the people who were sinners”).

[Read the Bible Gateway Blog post, How Friendship Helped a Follower of Islam See the Truth About Jesus]

The deliverance or salvation represented by the verb anjā not only relates to end-time salvation. Indeed, the Quran uses the verb on occasion to refer to saving a physical person who then turns away through ingratitude (6.64; 10.23; 17.67). The famous Jalalayn commentary is specific on identifying the sin after salvation in 6.64: “Say, to them: ‘God delivers you from that and from every distress, [from every] other anxiety. Yet you associate others with Him.’”

[Read the Bible Gateway Blog post, How to Live Your Faith in a Rapidly Changing Multi-Religious Society]

In the sūras attributed by Muslims to Muhammad’s Medinan period, the verb anjā occurs infrequently. By this stage, in terms of Muslim understanding, Muhammad’s authority as the messenger of God has been firmly established, and the message of deliverance/salvation and reward has been clearly articulated. What predominates in these chapters is a resounding warning of the dire punishments awaiting disbelievers and the disobedient. Even when the verb anjā does occur, it is collocated with references to punishment: “You who believe! Shall I direct you to a transaction that will rescue you from a painful punishment?” (61.10).

[Read the Bible Gateway Blog post, How to Make Disciples Where You Are: An Interview with Jeannie Marie]

Apart from the specific use of the verb anjā, how does the Quran advise Muslims to avoid eternal punishment in the hereafter? The core notion is through obedience to God’s commands by following the guidance of the prophets and the divine Law. This is well summarized in 103.2–3, which Muslims consider to originate from the early part of Muhammad’s ministry, where the message of following the Law and the Prophets is clearly articulated: “Surely the human is indeed in (a state of) loss –except
for those who believe and do righteous deeds, and exhort (each other) in truth, and exhort (each other) in patience.”

The Quran with Christian Commentary is published by HarperCollins Christian Publishing, Inc., the parent company of Bible Gateway.

See what you’re missing by not being a member of Bible Gateway Plus. Try it right now!

The Quran with Christian Commentary