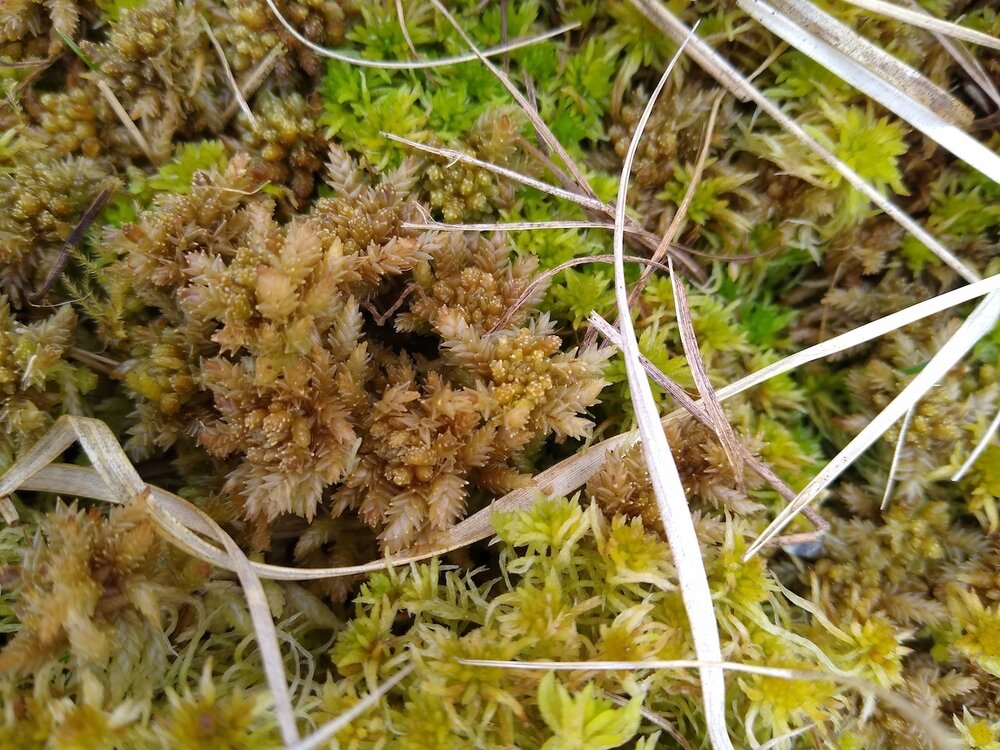 The Secrets of Sphagnum

For the past few centuries peat bogs (or mosslands as we call them here in Lancashire) have been considered god-forsaken wastelands, impassable ‘by man or horse’, ‘too dry to farm, too wet fish’. Drained and excavated they have only been valued in so far as they provide land for farming and peat for energy and horticulture.

Only, in the last fifty years, with the rise of the environmental movement and growing awareness of the climate crisis have we begun to recognise them as habitats valuable in the themselves and as carbon sinks that hold twice as much carbon as forests.

Peat bogs began developing after the Ice Age. Many of our lowland raised peat bogs in Lancashire formed in lake basins. The decaying fen vegetation at their edges filled in the lakes and their centres, cut off from dying plant matter, became nutrient poor. This provided the perfect condition for the colonisation of sphagnum mosses.

Sphagnum mosses have been referred to by scientists as ‘ecosystem engineers’ since Jones et al coined the term in 1994. This is because of the way they manipulate their habitat.

Their ability to do so is a consequence of their structure. Sphagnum mosses are composed of small, photosynthetic cells sandwiched between large, empty hyaline cells, which make possible their storage of large amounts of water, and provide a large area for cation exchange. As rare nutrients are swapped for hydrogen ions, they further acidify their surroundings, making them more suitable for sphagnum growth.

The high levels of acidity are unfavourable to decomposer microorganisms. This, along with low nutrient levels in the plant tissues, leads to resistance to decomposition. Even more cleverly, sphagnum mosses release ‘a pectin-like substance called sphagnan’, which ‘inhibits nitrogen uptake in decomposer bacteria causing them, in effect, to shut down’, thus further slowing the rate of decomposition.

Sphagnum grows from the apices at the top and breaks down and dies at the base. Layers of peat are formed as material from the living acrotelm (from the Greek acro ‘topmost’ and telm ‘marsh, pool, standing or stagnant water’) is transferred to the inert catotelm (from Greek cata ‘down’). This leads to the formation of a dome of peat, which outgrows the lake and becomes completely ombrotrophic ‘rain fed’.

Thus sphagnum manipulates its habitat to create conditions suitable for its growth.

When I discovered this secret it excited me, as an animist, as I took it as scientific evidence for the intelligence and personhood of sphagnum mosses as builders of peat bogs.

I linked this to my knowledge of how, during a period of climatic deterioration, when the weather grew colder and wetter in the Late Bronze Age (1400 - 600 BCE), peat bogs grew and spread, swallowing the oak forest, making the land uninhabitable. Our ancestors responded by making offerings to the bog spirits in the bogs and at the roots of bog oaks, and by building wooden trackways such as Kate’s Pad on the Fylde.

I was therefore intrigued to find out that the 380 species of sphagnum mosses we know today originated in the Northern Hemisphere during another cooling event in the middle Miocene (16 - 11.6 ma) and radiated south to colonise almost every continent on the globe. There is a link between the formation of peat bogs and global cooling.

At first I thought the cooler, wetter weather (more rain to feed the bogs, less sun to dry them out) was the cause of their growth. I then realised that because sphagnum removes carbon from the atmosphere through photosynthesis and, instead of decomposing like other plants, takes it into the ground, it brings about global cooling.

Another secret of sphagnum is that it not only engineers the land but the atmosphere.

A further finding was that ‘peat-moss like fragments’ - ancestors of the Sphagnopsida, the family of sphagnum, found in Winconsin are the ‘oldest known vegetative remains of land plants’ dating back to the Ordovician (460 - 607 Ma). ‘Moss dominated peatlands… were present hundreds of millions of years earlier than previously thought’.

Sphagnum has therefore been engineering the land and atmosphere since plants first colonised the Earth. Recognising the intelligence and agency of sphagnum may prove key if we wish to work with it against global heating at this time of climate crisis.

is a poet, author, awenydd, Brythonic polytheist, and devotee of Gwyn ap Nudd. Her three books: Enchanting the Shadowlands, The Broken Cauldron, and Gatherer of Souls are published by the Ritona imprint of Gods & Radicals Press. Based in Penwortham, Lancashire, North West England, she works as a conservation trainee restoring Lancashire’s precious peatlands. She blogs at ‘From Peneverdant’.

The Secrets of Sphagnum