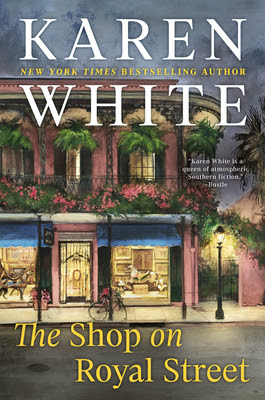 The Shop on Royal Street by Karen White

The Shop on Royal Street is the start of that new series, and it features Nola Trenholm, who is the stepdaughter of Melanie and daughter of Jack Trenholm from the first series. Nola was in the first series a lot, and the last few books helped set up this series. My biggest surprise was the time jump: eight years from the end of the Tradd Street series. But it felt seamless, and made perfect sense. Nola is now 26 and has just moved to New Orleans with a new job as a historic preservationist working for a civil engineer business. She's got a Master's degree and has returned to New Orleans to face some issues that happened her first year in college there. I really liked this older, more mature Nola.

There's also Beau Ryan, the young man we met in the Tradd Street series, who is Nola's biggest annoyance, and the object of her reluctant attraction. Beau and Nola went through some life changing situations in the earlier books, and Nola is resentful that he's saved her life. Beau is a bit mysterious, a few years older than Nola, and New Orleans is his home. His parents disappeared during Hurricane Katrina, a week after his young sister Sunny was kidnapped from their front yard. She's never been found, and neither have his parents. His grandmother runs a high-end antique shop that has some peculiarities that intrigue Nola. The chemistry between Beau and Nola is hot, but it's clear they have many issues to work through (hopefully through many more books in this series!).

Nola has found a home she wants to purchase and refinish. It's a disaster, and worst of all, it is haunted. So much so that no one wants to work on it, and people avoid it at all costs. Nola isn't afraid, and persists in buying the home. Boy oh boy does that house have a personality, and that's the foundation of this plot. It involves Beau's grandmother, a murder in 1964, and unresolved family issues.

I so enjoyed this novel, and the introduction of a few other characters--most notably Nola's roommate Jolene-a redheaded whirlwind of Southern femininity. I can't wait to read more and see how relationships evolve over time.

Set in New Orleans, there's plenty of material on ghosty happenings and historic homes for future stories. Fans of southern settings, family dynamics and romances that take some work will be sure to love this series. Yes, you can start with Nola's story in this new series but I would suggest reading the Tradd Street series first so you get the whole background, and see Beau and Nola when they first meet.

Rating: 6/6 for a new series that seamlessly moves characters forward from the first series. At the same time it has a fresh new setting, great characters with depth, and an atmosphere that puts you firmly in New Orleans.

This is available in hardcover, ebook, and audio book.

The Shop on Royal Street by Karen White