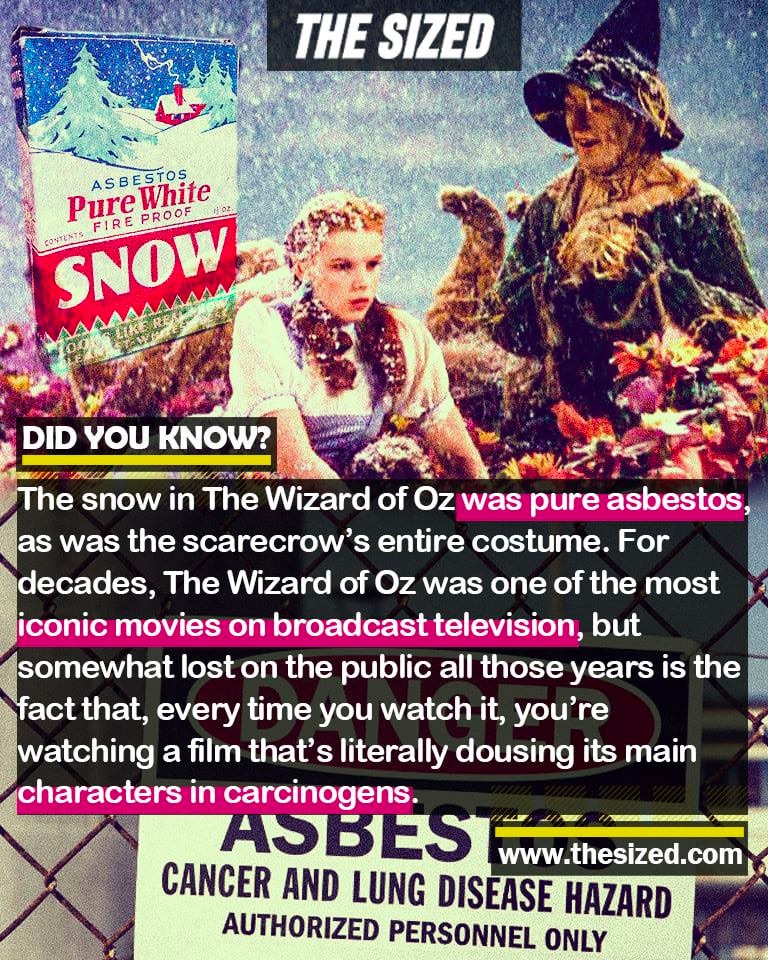 ‘The Snow in Wizard of Oz Was Pure Asbestos’

On November 14 2021, the Facebook page “Sized” shared a meme claiming that the snow in the 1939 film The Wizard of Oz was made from “pure asbestos”:

Underneath a still of The Wizard of Oz that showed Dorothy with the Scarecrow, text read:

The snow in the Wizard of Oz was pure asbestos, as was the scarecrow’s entire costume. For decades, The Wizard of Oz was one of the most iconic movies on broadcast television, but somewhat lost on the public all those years is the fact that, every time you watch it, you’re watching a film that’s literally dousing its main characters in carcinogens. [www.thesized.com]

A reverse image search turned up a December 2017 version of the meme on Imgur: 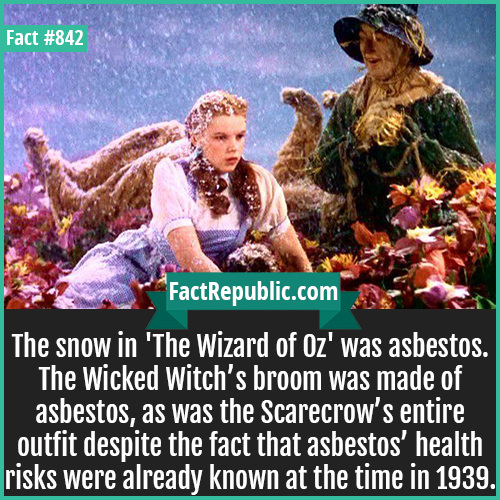 On December 28 2019, yet another variation using the same Wizard of Oz still was shared to Reddit’s r/Damnthatsinteresting, titled “Snow used in the Wizard of Oz was 100% pure asbestos”:

A top-level comment on that thread may have been the inadvertent trigger for the recirculation of the meme:

Famously used in the poppy field scene in the wizard of oz and probably responsible for the early deaths of several members of the cast and crew.

Asbestos, a catchall name for a group of minerals that forms into thin fibers, can cause major health issues — such as mesothelioma — when tiny pieces embed themselves into human tissues and organs. It is now well known as a carcinogen, was a large part of many industries through the late twentieth century; latency between exposure and illness was one factor in how long its use continued. A resource on asbestos from the British Lung Foundation explained that “buildings constructed before the year 2000 may still have asbestos in them.”

Just as the meme in various formats had circulated for years prior to November 2021, reiterations of the claim appeared in articles and “fun facts” blog posts (sometimes with a “reportedly” tacked on to it). Most explanations cited a 2011 post on what Atlas Obscura described as the “for-profit Asbestos.com”; that blog post was titled “Christmas Decorations in the Attic Might Be Sprinkled with Asbestos.”

Asbestos was once marketed as artificial snow and sprinkled on trees and wreaths and ornaments. Although those products have not been produced for many years, the oldest decorations that were passed down from one generation to the next, may still have small amounts of asbestos.

The most famous asbestos snow scene was used during the filming of “The Wizard of Oz,” the 1939 classic with Judy Garland that became the most watched film in history. There is a scene in the movie where snow, made from asbestos, falls on Dorothy and her friends, awakening them from a spell cast by the Wicked Witch of the West.

The Raybestos-Manhattan Corporation, which made the product, even marketed the snow in 1940 with an advertisement that included: “It is a safe snow for holiday decorations.”

Like most Americans, you may be fond of the classic 1939 movie “The Wizard of Oz”. It turns out that the merry old land of Oz was a toxic cloud of lethal asbestos exposure.

Remember that famous poppy field scene? The one in which the Glinda the Good Witch counters the sleep-inducing effect of the Wicked Witch’s poppies with snow? You’ll be shocked to know that the “snow” falling on Dorothy played by Judy Garland, the Scarecrow, the Cowardly Lion and the Tin Man was made from 100% industrial-grade chrysotile asbestos—despite the fact that the health hazards of asbestos had been known for several years.

The second excerpt cited an unverified IMDb “trivia” section for the Wizard of Oz, which held:

In the famous “Poppy Field” scene (in which Dorothy fell asleep) the “snow” used in those camera shots was made from 100% industrial-grade chrysotile asbestos–despite the fact that the health hazards of asbestos had been known for several years.

As promised, we’re posting a tabulation of the films we have all forwarded that directly or otherwise relate to occupational hazards—past, present and future. You might consider this entry as a sequel to the original blog: “OSH in the Movies: This Time It’s Personal.” Your suggestions are fabulous in their variety and quality. Many brought back wonderful memories. Many provoked me to think about the workplace threats described in these movies, whether presented as screwball comedies or in deadly seriousness. And of the films I have not seen or didn’t know, I have added several to my “to see” list. So, thank you, all.

I have derived three lists, ordered alphabetically: (1) films I think best portray OSH issues within the movie, (2) films that were associated with occupational hazards during production, and (3) films I felt deserved mention due to their eclectic nature. But make sure you look at the others not on these lists. There are some marvelous movies that depict OSH issues very well. And while your submissions include several Sci-Fi flicks, please don’t let that plant a subliminal seed that workplace hazards are a thing of the past or future, fictional, or no longer encountered in the “developed” countries such as the U.S.

A companion post, “OSH in the Movies: The full list,” specifically referenced the use of asbestos as snow — presumably as an example of a film “associated with occupational hazards during production”:

From our readers: Buddy Ebsen, originally cast as the Tin Man, had to be replaced after coming down with severe shortness of breath which was diagnosed at the time to be an “allergy” to the aerosol (powder) application of his tin oxide makeup. The film had several other workplace injuries: Margaret Hamilton, the actress playing the Wicked Witch of the West, was severely burned in a scene where she disappeared in a puff of smoke. Toto was even injured and unable to work for two weeks after he was stepped on by a crew member. And like “White Christmas,” the snow in “The Wizard of Oz” was asbestos sprinkled over the actors.

From IMDb: Dorothy Gale is swept away to a magical land in a tornado and embarks on a quest to see the Wizard who can help her return home.

Variations of a meme claiming snow in The Wizard of Oz was “pure asbestos” circulated intermittently, spiking again after a November 2021 Facebook post. Most mentions of the claim cited a 2011 blog post or, via a chain of links, an unsourced IMDb “trivia” page for the film. However, a 2010 CDC series on Occupational Safety & Health (OSH) in film noted that “like ‘White Christmas,’ the snow in ‘The Wizard of Oz’ was asbestos sprinkled over the actors.” Broadly, the claim was plausible due to the retail presence of snow made from asbestos in the 1930s, and asbestos-centric sites warned those in possession of vintage Christmas decor to ensure the pieces were asbestos-free.

The post ‘The Snow in Wizard of Oz Was Pure Asbestos’ appeared first on Truth or Fiction?.

‘The Snow in Wizard of Oz Was Pure Asbestos’