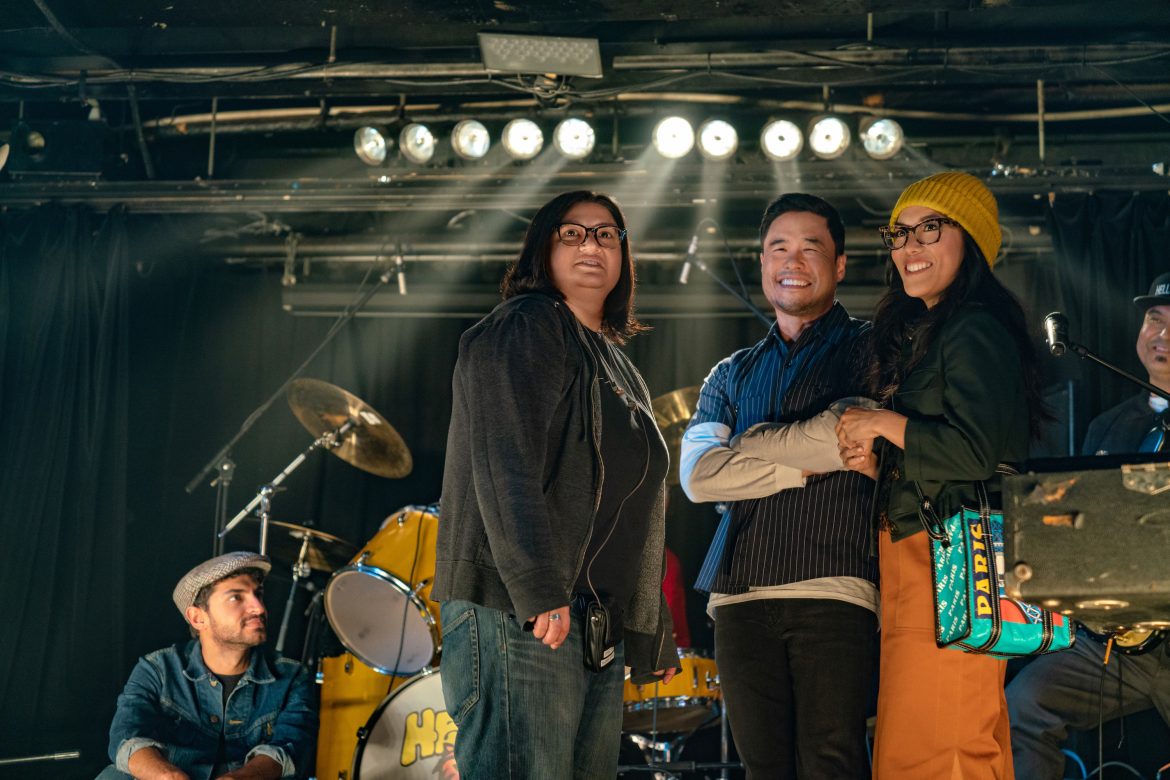 Two childhood friends go for 16 years without seeing each other until they wind up reconnecting as adults, and at very different points in their lives. While Sasha Tran (Ali Wong) is a successful celebrity chef, Marcus Kim (Randall Park) still lives with his dad and plays in the same band he was in from high school. While everyone else always saw them winding up together, the idea had gone largely unexplored by the two until they start spending time together again.

This is the premise for the new romantic-comedy Always Be My Maybe. Written by Wong, Park, and Michael Golamco and directed by Nahnatchka Khan, the story was initially just an idea Wong and Park had. After Wong mentioned it in a 2016 article for The New Yorker, there was a bigger push for the idea to become reality.

“That section of the article got picked up by Vulture and a lot of other online outlets,” Park said. “They wrote, ‘Dear Hollywood: Please make this movie.’”

“We didn’t have a script, but people really wanted to see this movie or at least read the script, so we were like, ‘Maybe we should write the script,’” he added.

Wong is a San Francisco native, and in the past had written shows for the epicenter for Filipino American performing arts, Bindlestiff Studio. Playwright Conrad Panganiban, who knew her back then, has a distinct memory of her saying during a writing workshop, “I want to write parts that actors would kill to play.”

While that wasn’t consciously on her mind as she was writing the script, the final product turned out having just that. Wong notes the praise from early screenings for the other characters in the film.

“I think [the actors] had so much fun playing those roles,” Wong said. “They all got to play real people.”

Always Be My Maybe is Khan’s film directorial debut, after having directed episodes of Fresh Off the Boat (which she also created and is showrunner for). Apart from the bigger scale and longer story, the big difference for her when it came to directing film versus directing for TV was tone.

“There are some tonal shifts, especially within the first ten minutes of the movie,” Khan explained. “That to me is exciting. That’s not scary to me because that’s how real life is. You can be having fun and laughing and then something terrible can happen, but that doesn’t mean that suddenly, your life is a tragedy. It’s ups and downs, and I appreciate that about this story that these guys were telling.”

While Wong and Park have worked together on Fresh Off the Boat (Wong as a writer and story editor, Park as an actor portraying Louis Huang), they rarely got to see nor work together. Working on Always Be My Maybe with Khan was a collaborative experience.

“[Even] in between takes, we’re reading news or just responding to stuff, and I wouldn’t do that with anyone except for these guys,” Wong said. “Just talking about celebrity gossip or sharing memes. It’s really, really fun.”

“If you’re not having fun with the people you are working with, you go home right after the day’s done,” Park added. “But we always went to dinner, we always hung out, it was so fun.”

The film is set, and was partially shot, in San Francisco, which Khan commended as a “beautiful and nuanced city.” The three pointed out how it’s not that common to see romantic-comedies set in San Francisco, as they bounced off of each other on films in other genres that share the setting. “When you do introduce a city as another character, especially in a romantic-comedy, it makes it extra romantic,” Wong added.

Apart from Wong and Park, Daniel Dae Kim and Keanu Reeves are also notable Asian American actors in the film. Wong and Khan both praised Kim for his kindness — and humor that he doesn’t get to show in his other acting roles.

There was also a lot to say about Reeves, such as the humor and improvisations he brought to his role.

“He brought so much to it,” Park said. “So much of [what he does] in the movie were his ideas. He just came prepared. He had all his lines ready to go.”

“It’s great for everybody, especially those who make decisions, because anytime a comedy succeeds on that kind of level, it’s great for all comedy,” Khan said.

Khan and Park really hope for audiences to be entertained, be invested in the characters, and like the film enough to recommend to others.

“It’s not so much a message I want people to live with, it’s a feeling,” Wong said. “A feeling of joy and a feeling of, ‘I want to watch this again.’”