The Taking of Kabul

Photos and captions by Andrew Quilty

For almost a decade, Australian photographer Andrew Quilty has been based in Kabul, Afghanistan.

In that time, his photography and writing have garnered countless awards, including multiple World Press Photo Awards, a George Polk Award, three POYI Awards, a Sony World Photography Award and six Walkley Awards, including a Gold Walkley. Quilty was present for the recent and insanely chaotic end of America’s 20-year mission in Afghanistan, and the Taliban’s subsequent capture of Kabul.

Taliban fighters ride atop an American-made armoured Humvee through the streets of western Kabul while being cheered on by local residents and passers-by, on the afternoon an agreement was reached by the Taliban leadership and the Afghan government which saw President Ashraf Ghani step down in a transfer of power with barely any bloodshed in the takeover of the capital. The takeover of the country transpired rapidly after U.S. and international forces began their final military withdrawal on May 1 this year. Since then, the Taliban swarmed across the countryside overrunning provincial capitals, taking all 34 in a period of 10 days, including Kabul. The Taliban leadership instructed their fighters not to enter the city, though some appeared not to have received that order, parading through the streets on motorcycles and in Toyota Corollas. Government security forces were also asked to maintain security in the capital until further arrangements were made. By that afternoon, most members of the government’s security forces had shed their uniforms and most had left their posts, leaving somewhat of a power vacuum. 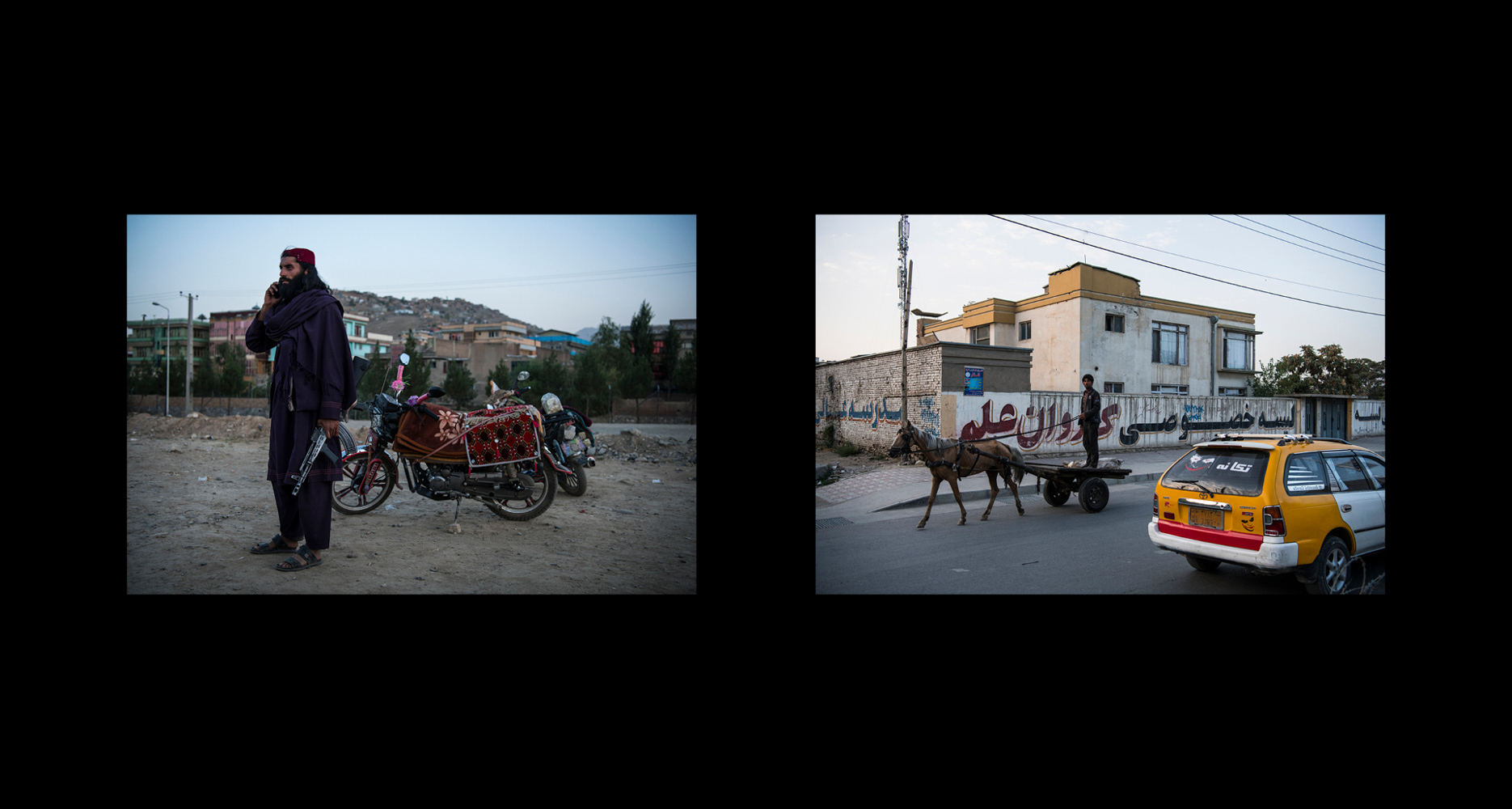 A Taliban fighter from Paktika province on the phone in western Kabul’s Company area, as numerous fighters made repairs to Afghan National Security Forces vehicles they had seized during the massive offensive.

Dawn in Kot-i Tangi, four days after the Taliban took control of the Afghan capital and with it, Afghanistan. 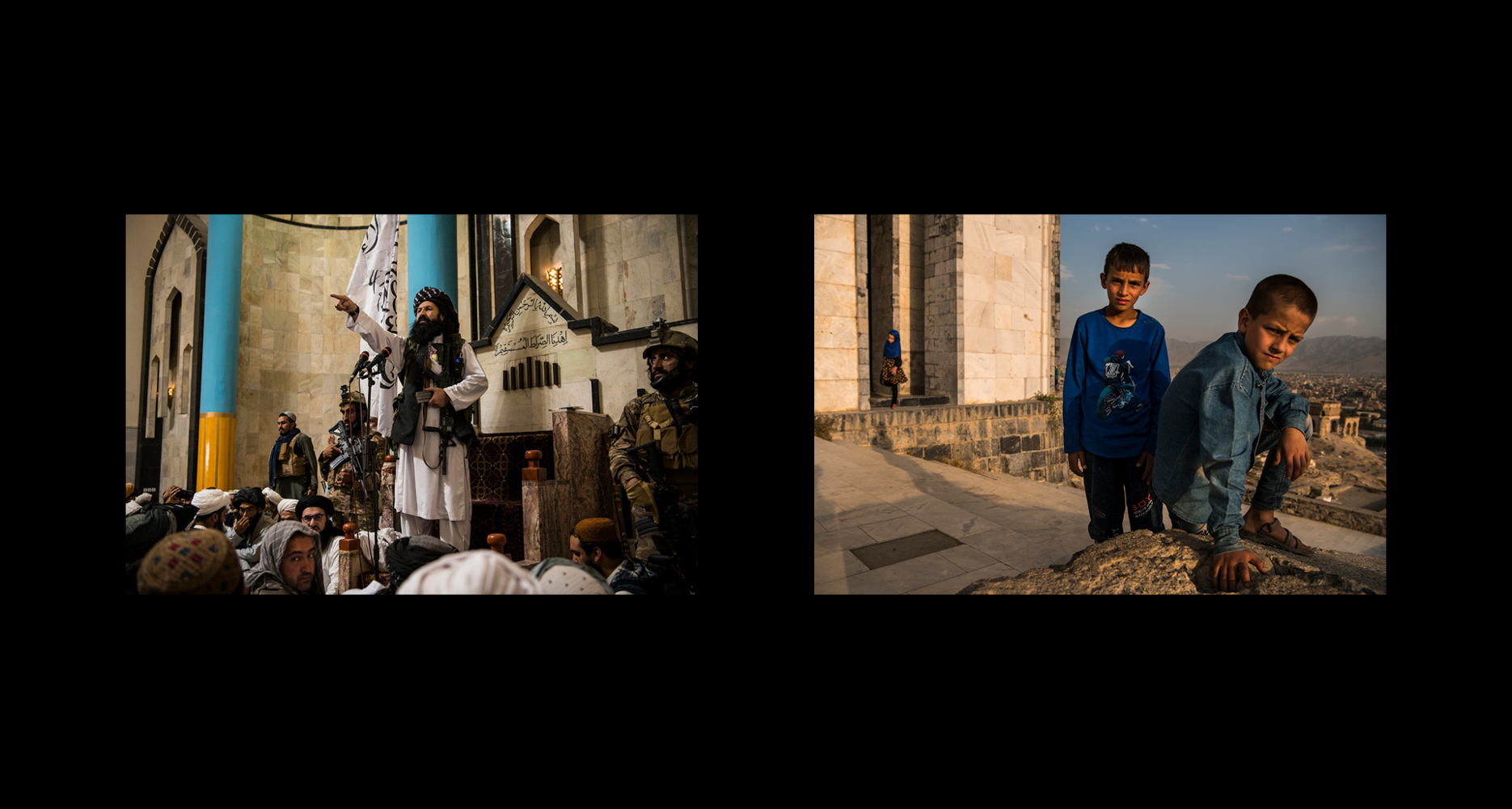 Young children play at the tomb and shrine of King Nader Khan which is located on a hillside in southern Kabul, one week after the Taliban took control of the Afghan capital. Some of the children were trying to sell cups of green tea to those visiting the site. 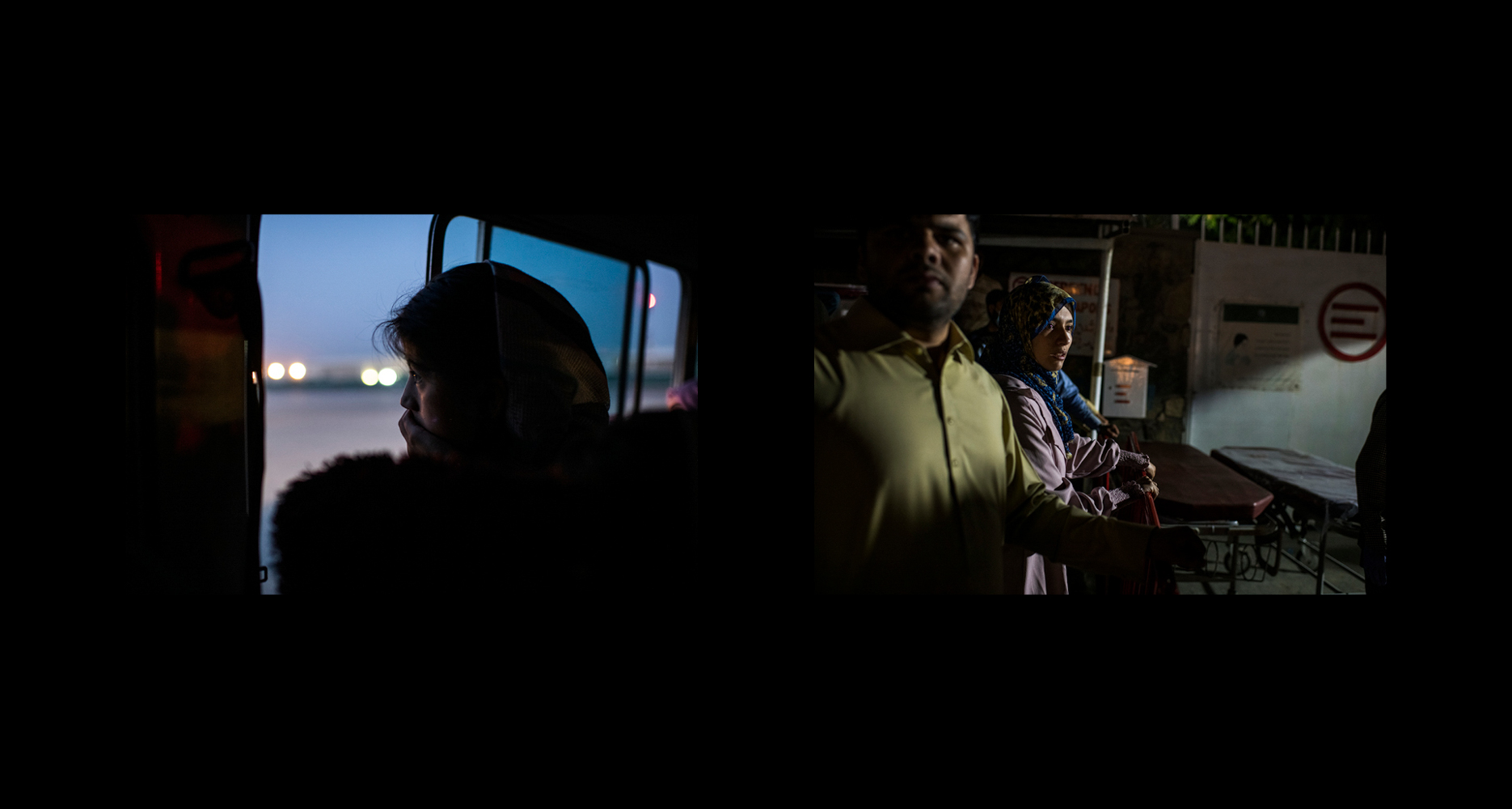 A minibus convoy loaded with more than 100 Afghan evacuees drives across the military side of Hamid Karzai International Airport to the tarmac, where several U.S. military transport planes waited to be filled with evacuees. As the Taliban took control of Kabul on August 15, the U.S. and other international militaries began a massive evacuation operation that would have to be completed by August 31, the date by which the U.S. had previously agreed to be withdrawn from Afghanistan. Tens of thousands have been evacuated since, as Afghans—some with valid travel documents and others without—desperate to leave since the Taliban came to power, mass at the various entrances around the perimeter of the airport trying to enter. The evacuation mission was the work of members of Sayara International, a research organisation with operations in Afghanistan, and the Rockefeller Centre, and involved the assistance of several journalists on the ground in Kabul. Among the 109 evacuees were Afghan journalists, a long-time UNESCO field officer, and their families. The mission saw the evacuees first meet at the Kabul Serena Hotel before departing in a convoy of minibuses, navigating checkpoints manned by both Taliban fighters and CIA-backed Afghan paramilitaries, and entering the airport via a gate at the north-western corner before being escorted to the tarmac and, finally, a waiting area where some would spend more than two days waiting for flights.

A young woman weeps by the entrance to Emergency Hospital for the War Wounded as the dead and wounded victims of at least one bomb, and possibly two, likely detonated by a suicide bomber, tore through crowds attempting to access Hamid Karzai International Airport 11 days after the Taliban took control of Kabul and a mass evacuation of foreign citizens and Afghans deemed to be at risk of reprisal from the former insurgent group commenced. Threat reporting had warned of an attack of this nature, especially at the airport entrance where the blast(s) occurred late that afternoon. The Islamic State Khorasan Province was believed to be plotting the attack and is assumed to have conducted it. 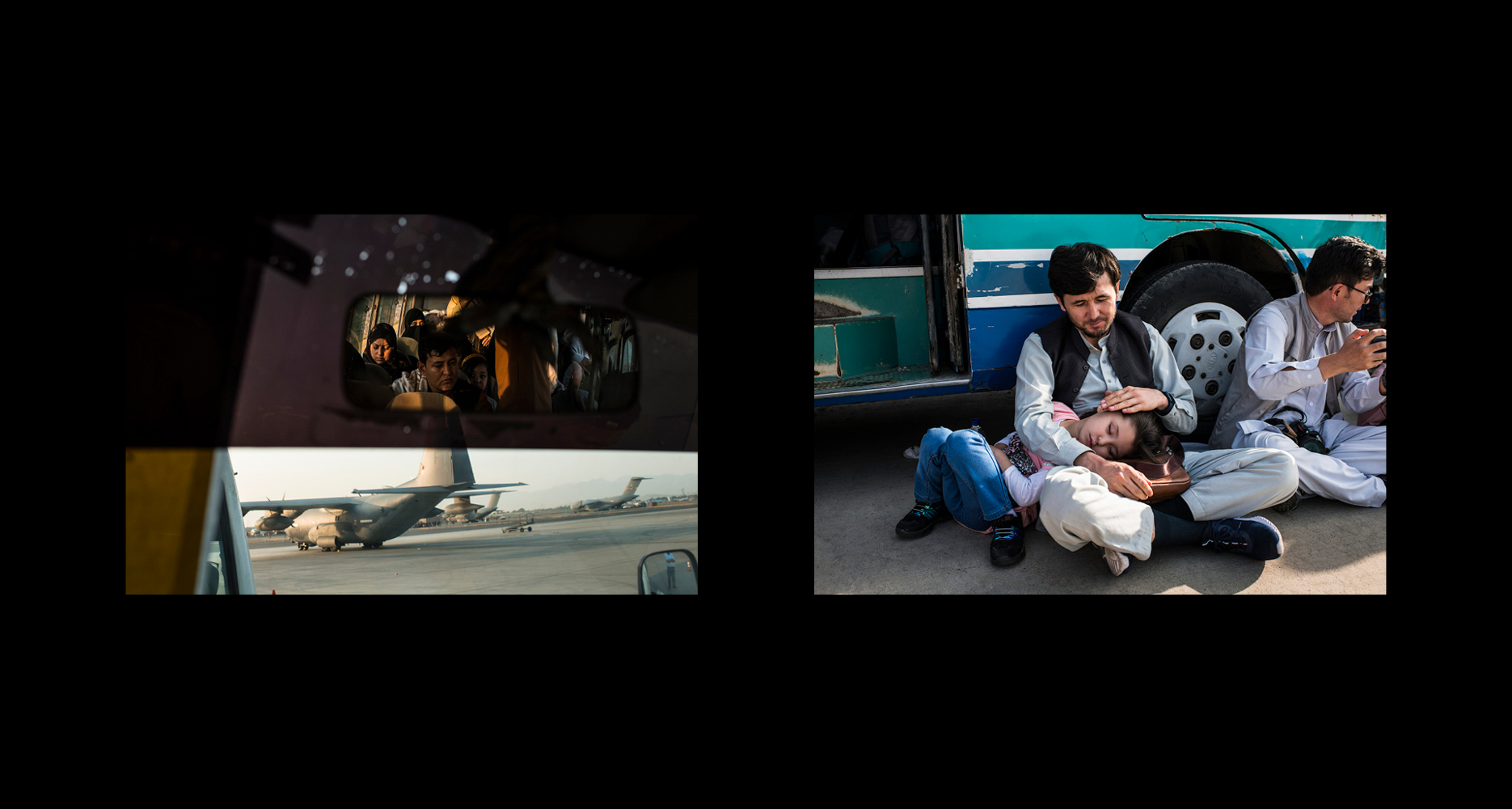 Afghan evacuees wait inside a minibus on the tarmac of the military side of Hamid Karzai International Airport where several American military aircraft are parked in preparation for evacuation flights. The convoy of buses, like the one pictured, transported a total of 109 Afghans from the Kabul Serena Hotel in the early hours of the morning.

Abdul Wahab Bakhtiary, 33, and his daughter Armita, 6, wait by a minibus on the military side of Hamid Karzai International Airport, from where they would eventually be evacuated. Because of the difficulty getting into the airport, the first charter aircraft, which had a capacity of around 300, departed with barely 50 passengers. 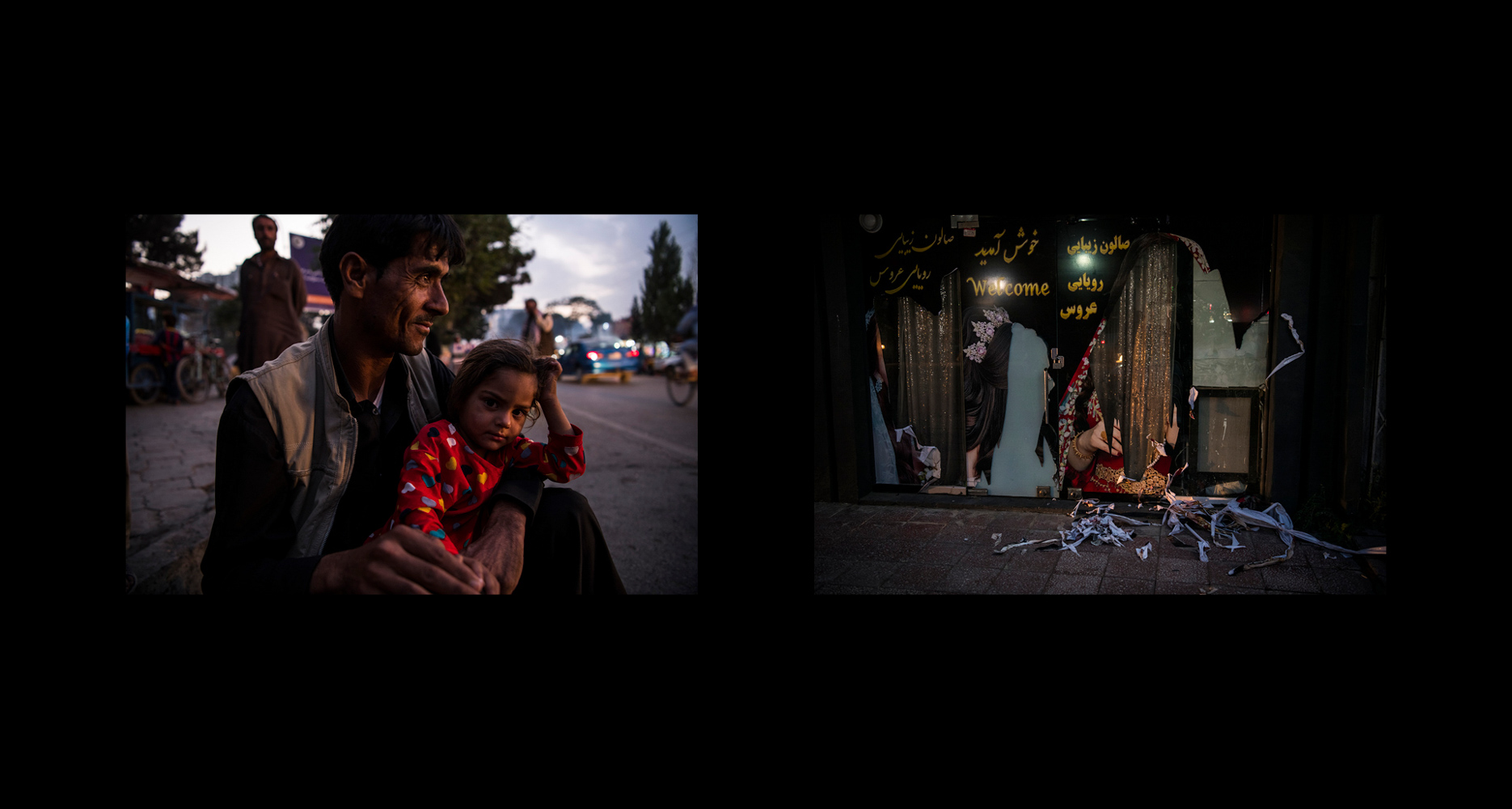 Noor Mohammad, 25, and his daughter Asthma, 3, were displaced from their home city of Kunduz by fighting in recent weeks. Outside Shahr-e Naw Park, dozens of displaced families set up temporary camp in the Kabul neighbourhood of the same name, one week after the former insurgent group took control of the Afghan capital.

One week after the former insurgent group took control of Kabul, the photos of made-up women that once adorned the facades of beauty salons around neighbourhoods like Shahr-e Naw have been stripped, either by Taliban fighters, their sympathisers, or by the business owners themselves trying to avoid an encounter with the group. The Taliban are expected to implement a harsh interpretation of Sharia law which may involve prohibiting the exposure of women’s faces or even reproductions of them in photographs. 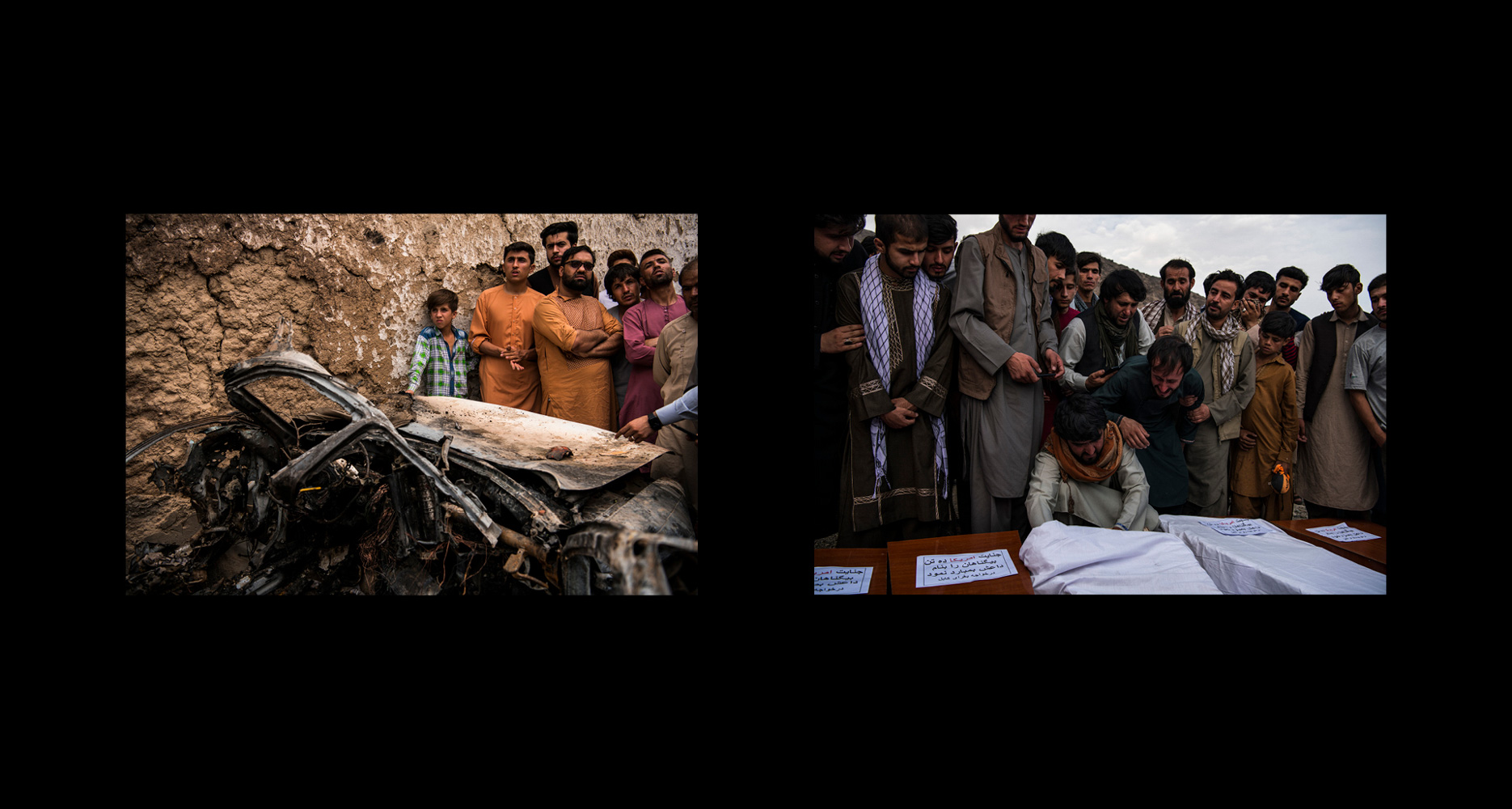 Family and friends of an extended family from Kabul crowd around the remains of the Toyota Corolla sedan which was struck around 5 pm the day before by a munition fired from an American drone.

The burial ceremony for 10 members of an extended family whose car was struck around 5 pm the day before by a munition fired from an American drone. U.S. officials said the strike had targeted a vehicle in which a suicide bomber who had plans to attack Hamid Karzai International Airport was travelling. 10 people from the family, including 8 children, were killed, as well as the driver of the vehicle—a man named Zemarai who had just returned from work and been welcomed by his children, as well as nieces and nephews who were in or around the car when it was struck. The airstrike was the second exacted out by a U.S. drone since the Islamic State Khorasan Province carried out a twin bombing at the airport four days ago, which resulted in the deaths of a reported 170 people, including 13 American servicemen and women. The Taliban took control of Kabul and with it, Afghanistan, on August 15, after overrunning more than 30 provincial capitals in slightly more than a week prior to the takeover of the capital. The Taliban now have a massive task ahead: governing a country of approximately 37 million people. 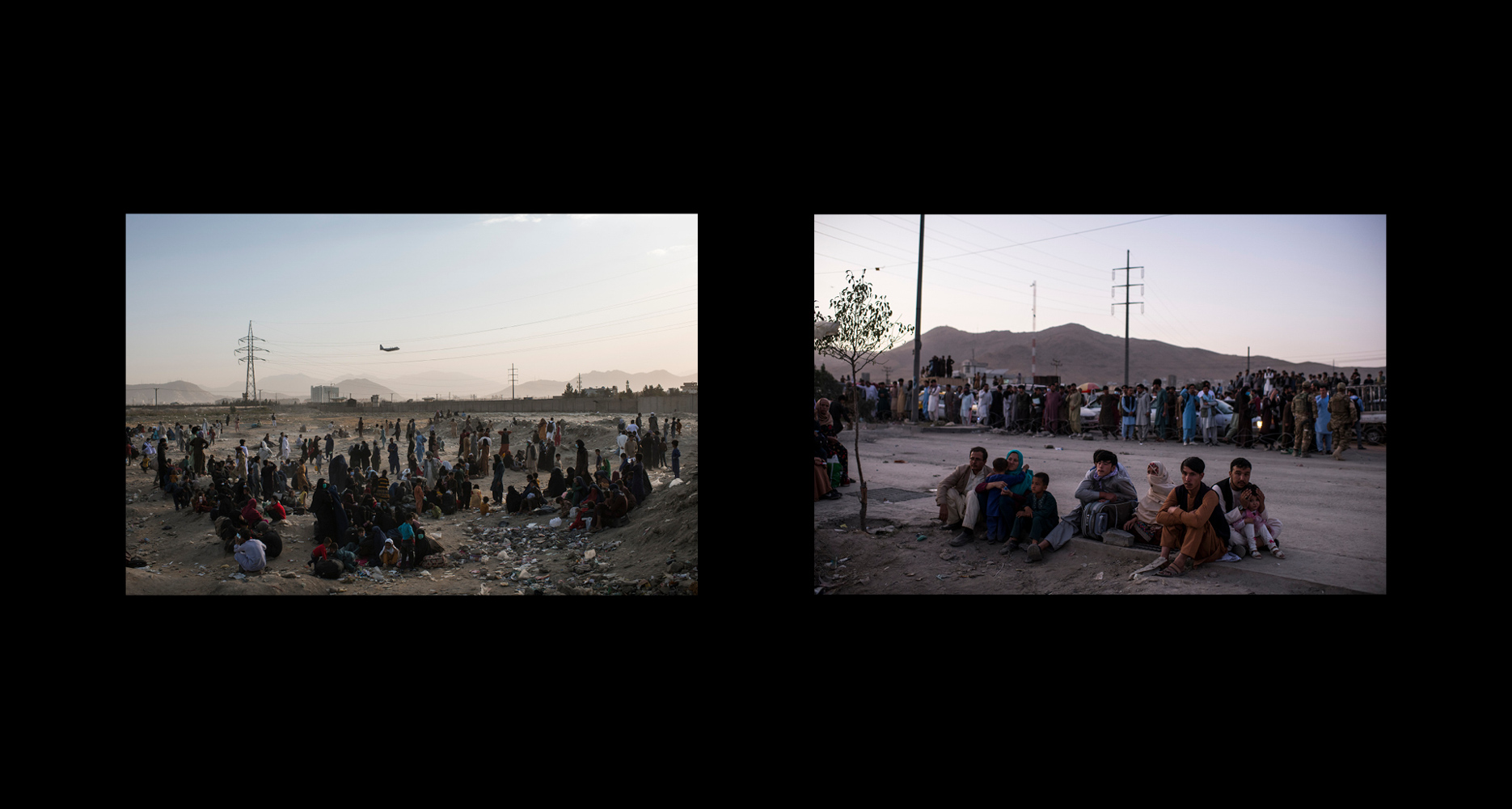 Hundreds of people camped in a dusty field adjacent to the north-western gate to Hamid Karzai International Airport, Kabul, as a U.S. military C-17 transport aircraft takes off in the background.

Hundreds of people outside the north-western gate to Hamid Karzai International Airport, waiting and hoping to gain entry. They are among the tens of thousands who have attempted to enter the airport, and to then board evacuation flights since the Taliban took control of the Afghan capital. Even those with valid travel documents, however, have found it incredibly difficult to navigate the treacherous paths and gateways to the airport, where Taliban fighters, U.S. Marines, British soldiers, and Afghan paramilitary units control access. On this day, the north-western gate was controlled by the notorious CIA-backed paramilitary unit known as 01. Later that day, Zabihullah Mujahid, the Taliban spokesman, declared that Afghans wanting to flee the country would be forbidden from accessing the airport. 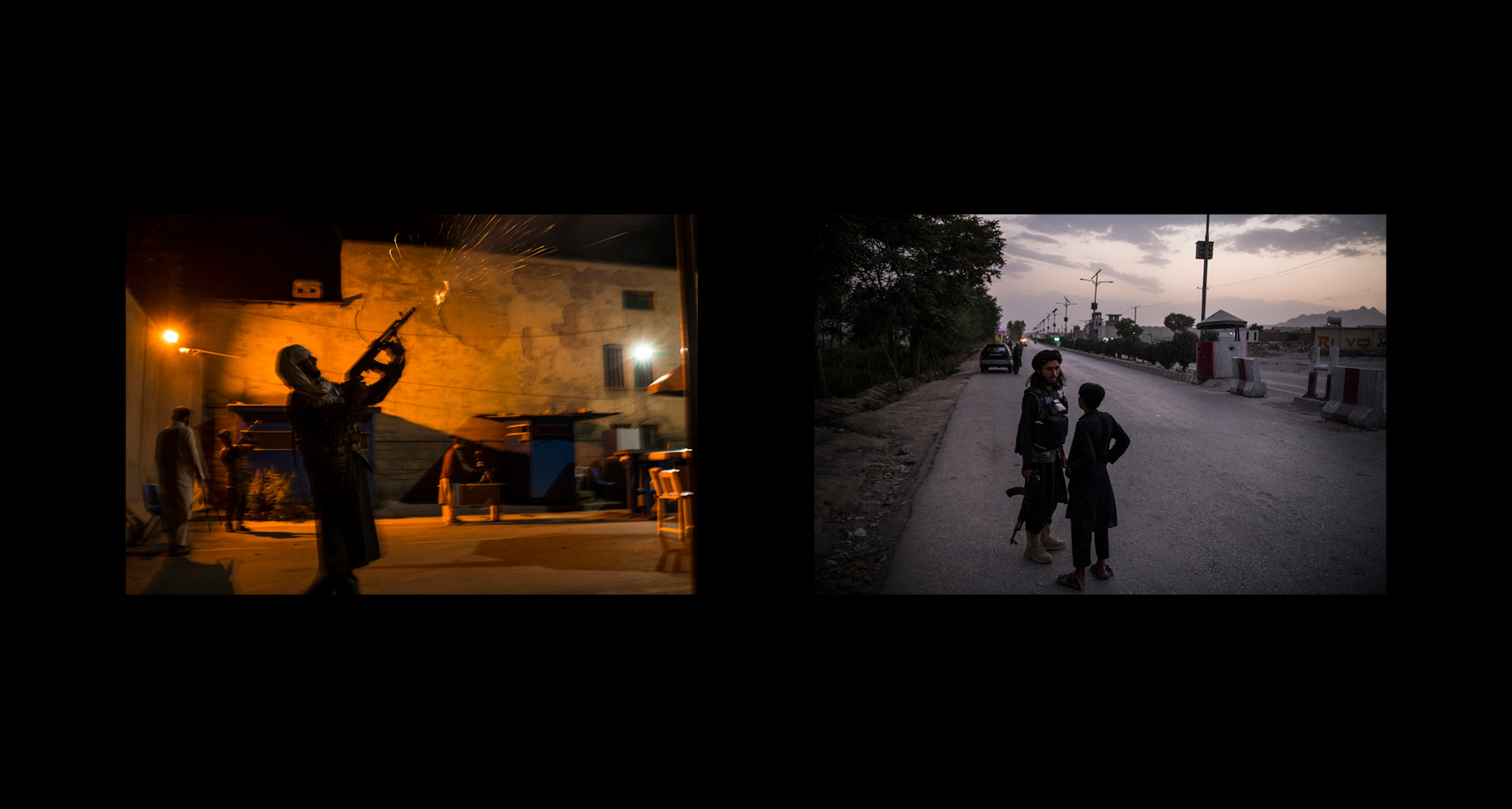 Taliban fighters guarding the street on which the United Nations Assistance mission to Afghanistan (UNAMA) has its ‘Alpha’ compound, where the Special Representative to the UN Secretary-General resides and works in normal times. Fighters fire into the air in celebration of the news that the last U.S. military flight has departed Afghanistan from Kabul’s international airport, barely an hour into August 31, the date by which the U.S. agreed the withdrawal would be completed.

A security checkpoint manned by Taliban fighters at the eastern gate to Kabul, on the outskirts of the Afghan capital two weeks after the former insurgent group took control of the city and, with it, the country—aside from Panjshir province which, at the time, was still occupied by the National Resistance Front—as a whole.

To see more from the 2021 Monster Children Annual, grab a copy here.

The post The Taking of Kabul appeared first on Monster Children.

The Taking of Kabul