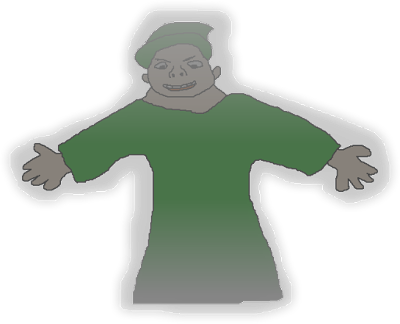 The Third Shimmering Shield - 3rd level
This powerful spell creates a glimmer effect on the target of the spell. Spells and magical effects and abilities have a chance to be resisted, starting at 50%. The one protected by this shield also gain +2 to all saving throws. This spell lasts for three rounds.

Quick Thoughts on Magic Resistance
I've had a change of heart recently. For some reason, I flipped around my older opinion. You see, a long time ago when reading up AD&D rules and the like, I noticed that some creatures and mechanics use magic resistance in the form of a percentile roll. I didn't like this at first, because it basically gave just a percent chance for spells to be ineffective or resisted by a creature. It was kind of boring, and not as flavorful. But I still wanted some form of magic resistance in my game for certain monsters, magic items, or player characters- so I wrote up a few versions, or folded it into spell saves.

Why did I dislike magic resistance as a mechanic? Well, this is partially for two reasons. First, I think part of my dislike of the mechanic was because, like many people, you self-insert as a player character when writing encounters and designing monsters. So the idea of being a magic user, especially one as fragile and impotent once your spells are expended in OSR/DiY, felt wrong to me. Secondly, I felt it just wasn't as flavorful as other forms of magic resistance. Spells just failing wasn't as interesting to me thematically or visually in the minds eye as say a mechanic that just weakened spells instead.

But this is no longer the case- I now have the opposite opinion. You can probably tell for my most recent monster generators that have magic resistance built int for big scary monsters! For starters, many magic spells have a built in idea that the enemy can save against them; many spells either don't offer saves or do something like half damage on a save, which means that they are 100% fool proof tools to at least do something when used. However, a creature who is resistant to magic can resist these spells- which is the only ways in rules text to thwart them. Of course, the idea of a magic user being able to "waste" a spell sounds bad on paper, but honestly every other class is at least partially dependent on luck to begin with- either to hit, percentile rolls to do thief or other skills as an X in 6 chance, and so on. Having just a handful of enemies, usually the higher powered ones, with a chance to avoid using spells is more then fair.

Secondly, visually and thematically, resisting spells is actually pretty cool. Remember, in fiction it can be basically anything you want. You can have a giant demon that resists spells and when the party's druid casts Entangle on him and he resists; what happens? Well the spell was resisted, so as long as it didn't make effect it doesn't matter. But what if it was because the vines touched the demon's leg and died from his negative life-force energy? Or perhaps he is so big and strong he just walked through them? It's pretty neat. Plus, when it comes to rulings over rules and keeping the game fresh and exciting; spells that are resisted don't necessarily just disappear. If you cast magic missile on something and it resists; does that mean the missiles go away? No! They will bounce off the creature and start flying around the room; breaking pots and windows, hitting minions and hirelings, bouncing around in a lightshow. If you cast a spell that creates a field of burning fire, for example, and the enemy resists it- it can now become a tool in the battle as the monster tries to drag your fighter into the fire while it does not burn, but you do. Of course- this is up to GM ruling. Spells that light the floor on fire with regular mundane fire may not be given a magic resistance check at all; the fire is just fire, a conjured arrow is just an arrow that flies true. But the thought, I think, is worth thinking about.