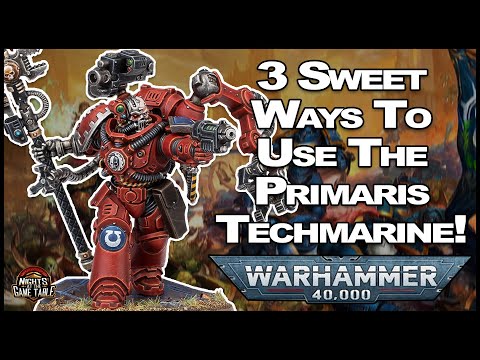 The Top 3 ways to use the New Primaris Techmarine Model

In today’s article we’ll be looking at the top 3 ways in which to best utilise your brand new Primaris Techmarine model.

Before we dive into the topic though, how awesome looking is this model? The GW design team have hit a home run with this guy! (It’s available from the 17th October). I know for certain I’ll be grabbing one for my space marines. Further gushing about this model aside, let’s dive right into his top 3 uses!

That’s right guys, we’re talking about a dread mob for space marines. The 9th edition SM codex saw dreadnoughts of all varieties take a solid buff. Dreadnoughts having the <core> keyword is excellent with how 9th is shaping up and the changes to marine rerolls. We’ve also seen dreadnoughts get a new datasheet ability – Duty Eternal. This use to be a stratagem that gave one dreadnought -1 damage to all incoming attacks for a phase for 1CP. Now every dreadnought in the book has this as a datasheet ability, which is fantastic! Now who better to look after your new army of advancing dreadnoughts than the Primaris Techmarine, healing them as they march up the board.

The Primaris Techmarine has an ability to give one dreadnought +1 to hit for shooting each turn in the command phase. This is a great buff for dreadnoughts like the Redemptor, which have multiple ranged weapons each. Not only does he make your dreadnoughts shoot more accurately but he will help keep them alive longer to. His datasheet ability “Blessing of the Omnissiah” allows him to heal one dreadnought for D3 wounds per turn, at the end of your movement phase.

The Master of the Forge

This is just the tip of the iceberg with this fantastic model as the SM codex unlocks many ways in which to make this concept even stronger. Let’s start with the “Master of the Forge” chapter command ability. This 20pt upgrade allows your Primaris Techmarine to heal for a flat 3 wounds per turn rather than D3. Healing for the greatest amount every turn will ensure your dreadnoughts keep fighting for as long as possible.

The Master of the Forge upgrade also unlocks the warlord trait “Warden of the Ancients”. This trait is made for dreadnoughts, giving +1 strength and attacks to all dreadnoughts within 6”. Give this to your Primaris Techmarine and watch your dreadnought death ball defeat all who come close in combat. But this is not the only warlord trait worth considering. I’m a huge fan of the “Rites of War” warlord trait, granting all <core> models within 6 inches the objective secured (obsec) ability. Obsec is HUGELY useful in 9th edition with the games shift of focus onto holding objectives!

This route for the Primaris Techmarine benefits running 2 – 3 Redemptor Dreadnoughts pushing mid-board. Alternately, our space wolf fans out there should look at triple venerable dreadnoughts with Blizzard Shield and Fenrisian Great Axe. These will be very hard to shift and deadly in combat.

Where would you most expect to find a Primaris Techmarine? Looking after the chapters vehicles of course. This is the case for the lore of 40k but also translates across to the table top as well. The ability to give a chapter vehicle +1 to hit for shooting attacks makes it the perfect addition to support your backfield heavy armour. Have the Primaris Techmarine give a Repulsor Executioner +1 to hit and watch as this heavy battle tank removes dozens of models from your opponent’s army each turn.

This +1 to hit buff is especially useful now in 9th when legion tanks have lost access to hit rerolls. It also helps negate the -1 to hit for shooting through dense terrain. On top of this, the Primaris Techmarine is on hand to repair any damage your tanks may take from opposing forces, keeping your tanks in top shape to destroy the foes of the Imperium!

Back in 8th edition, if you had told me I was going to consider a Primaris Techmarine as a pure combat character, I would have laughed! However, this character and the latest space marine codex have made me reconsider my position on this. Let’s break our character down, we have a stat line of:

Not the most awe-inspiring stat line but for an 80pt character, it’s definitely not bad. On top of this reasonable stat line the Primaris Techmarine comes with 5 different weapons:

Our forge bolter and grav pistol add some nice ranged options but our melee options are were the Primaris Techmarine shines. When charged/charging the Primaris Techmarine gets 5 attacks. One is a servo arm swing (which has lost the -1 to hit from 8th edition!). Our other 4 are with the Omnissian Power Axe. The axe hits at str6, ap-2, damage 2; the perfect profile to be killing other Primaris marines. Finally, to top it off we get an addition 2 strength 5 ap- damage 1 attacks from the Mechadendrites, 7 attacks total! The Primaris Techmarine is clearly good in combat but we can make him better!

What to give your New Primaris Techmarine

The first combat buff I would look at is the warlord trait “Imperium’s Sword”. This trait gives the Primaris Techmarine +1 strength and attack when he’s charged or performed a heroic intervention. This means the axe now strikes at strength 7! Next I would look at taking the forge master upgrade and adding the unique relic “Mortis Machina”. This axe strikes at +3 strength, ap-2 and damage 3 whilst also doing 1 MW for each failed save against vehicles. The relic and warlord trait combined means our Primaris Techmarine has 5 strength 8, ap-2, damage 3 attacks, 1 strength 9, ap-2, damage 3 attack and 2 strength 6, ap-, damage 1 attacks on the charge. This has the Primaris Techmarine killing gravis units all by himself.

Summary of the New Primaris Techmarine

The Primaris Techmarine is a great choice in whichever role you choose for it. Backfield keeping tanks alive, marching up the board with an escort of dreadnoughts or even in the thick of the fight. This model is a solid addition to any Space Marine force and I’ll definitely be adding one to my collection!

That’s it for now on the Primaris Techmarine but if I’ve missed any super interesting combos let me know in the comments! I’d love to know all the strongest and best uses for this great model!

If you’d like the Nights Team to give you a free Army List designed for you free of charge. Click this link to schedule a time with one of our team members: https://nightsatthegametable.youcanbook.me

The post The Top 3 ways to use the New Primaris Techmarine Model appeared first on Nights At The Game Table.

The Top 3 ways to use the New Primaris Techmarine Model