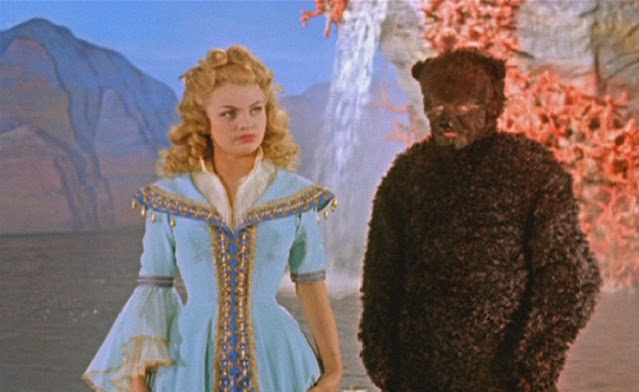 The Singing, Ringing Tree. Network Blu Ray 2021
I have to confess that my first viewing of The Singing, Ringing Tree wasn’t during my infancy when it was screened by the BBC. If you read through many of the responses to the film on IMDB then most viewers encountered, during their childhood, a disconcertingly scary film. From 1964 right through the 1980s it frightened new generations.
🔻
I watched it five years ago and re-saw it today. Although I admit The Singing, Ringing Tree is somewhat weird I feel its power to ‘traumatise’ you right into adulthood has been exaggerated. It’s charming, captivating and, from a distance only, intellectually disturbing. What the fairy tale’s huge fish, talking bear, malevolent dwarf and tree might symbolise is open to considerable interpretation and children’s TV isn’t solely responsible for nightmares. The important thing to savour is the lovely simplicity of The Singing, Ringing Tree and its moral strength.
A beautiful, arrogant, spoilt princess rejects the proposal of a wealthy prince. She will only marry him if he brings her the famed singing, ringing tree. The prince finds the tree but it lies in the land of an evil dwarf who promises to give it to him. However if the princess still rejects the prince then he will be turned into a bear. For the tree to sing and ring she must be truly in love with her suitor. She isn’t. Thus the prince becomes a bear. And the princess is put through a series of tests so as to break her selfishness and make her love and care for all creatures, outside of herself, including a welcoming prince.
The Singing, Ringing Tree was produced in East Germany in 1957 and was one of the many fairy tales produced then that you were meant to decode as signifying the politics of a carefree socialism. However it appears it received a hostile reception from disapproving GDR film critics who labelled it “a bourgeois idyll.” The question of whether the film is communist or capitalist is for me irrelevant. If you watch the included extra interview with Christel Bodenstein (our princess) she sees the film to be about love and transformation.

All that hairiness might suggest a Freudian handled
sexuality that the virgin princess has to eventually accept.
Yet stories resonate even more when they are put into a cultural context. The aesthetic charge of The Singing, Ringing Tree reveals its influences. That bear for instance. Isn’t it another variation of the beast from the tale of Gabrielle-Suzanne Barbot de Villeneuve and Cocteau’s famous film La Belle et le Bête? All that hairiness might suggest a Freudian handled sexuality that the virgin princess has to eventually accept. For me the haughty countenance of the princess resembled the face of a young Leni Riefenstahl with her superior Aryan sense of control. And The Singing, Ring Tree’s dwarf evoked the dwarf Alberich in Wagner’s Das Rheingold (Especially in the ring of fire encircling the tree scene). The change from a beautiful princess into a plain rustic girl invited me to think of Hans Christian Anderson’s ugly duckling although the girl has green hair and a noticeably upturned nose she’s still a pretty gamine.
All the characters in The Singing, Ringing Tree are archetypes. However the most seductive and iconic character is surely the remarkable studio set of art designer Erich Zander. It looks papier-mache but apparently was very expensive with glowing colours that are quite wonderful, filmed to alternate between the inviting and the forbidding. The design combines both cheery Xmas card art with a muted sense of Max Ernst menace all nestled in an artificial dreamscape. And now thanks to Network’s beautifully produced Blu Ray the film’s photography has a vivid presence.
The Singing, Ringing Tree is a film for people all ages who may, or may not, still be scared, not to death, but like the Princess will mature to understand and experience the enchantment of the real world and the redemptive power of love.
For another interpretation of the 'Singing Ringing Tree':
https://midpenninearts.org.uk/projects/singing-ringing-tree/
Source: pelicanist