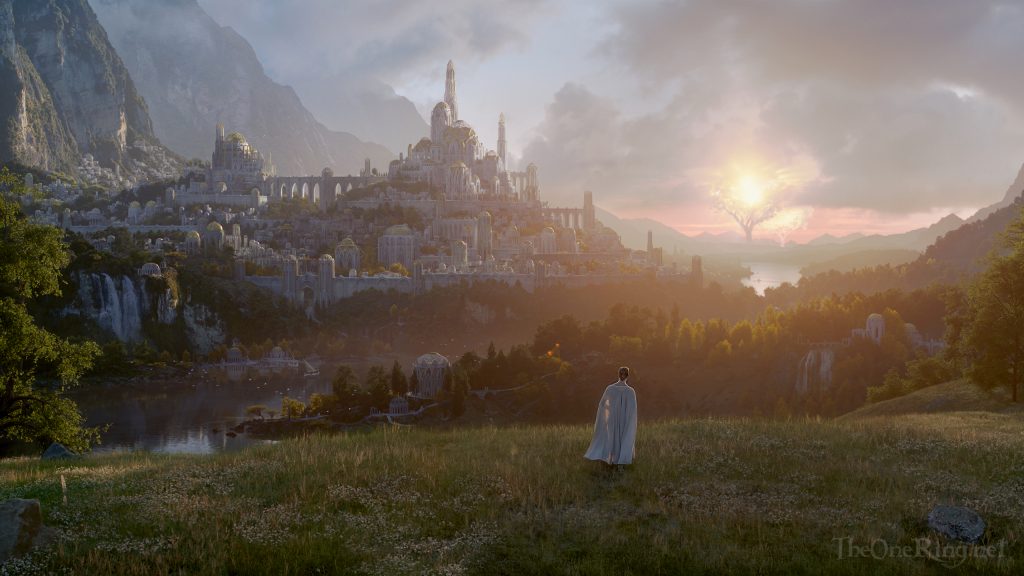 Last week, staffers greendragon (writing here) and Justin from TORn were delighted to join a merry band, invited by Amazon to a The Lord of the Rings: The Rings of Power sneak peek event. The group, made up of YouTubers, TikTokkers, podcasters and more from across the Tolkien fandom, enjoyed a day in Oxford, walking in the footsteps of the Professor. They were then treated to a viewing of footage from Season One of the show, complete with music and visual effects. This was all topped off with a chance to meet the showrunners, and hear some of their insight into the show they are bringing to life.

It was wonderful to see some finished footage; and even more wonderful to hear the enthusiasm and passion of the two folks in charge. There will no doubt be many varied opinions on the details of The Rings of Power when finally we all get to watch it this Fall; but anyone who hears the showrunners speak could not doubt their respect for the writings of Tolkien, their in-depth knowledge of the legendarium, and their desire to do justice to the Middle-earth we all know and love. It seemed like everyone in attendance was impressed and excited by what they heard. Alas, we can't share any details right now - but we can tell you there are wonders being crafted, to bring to the small screen this September and beyond. And we hope you'll find that an encouraging thought.

Read on for Justin's thoughts on the experience:

A curated, catered adventure full of fan fellowships, surprise access & curious company aligns for a major reveal of The Lord of the Rings TV series, The Rings of Power.

Prime Video’s giant TV show, a long form adaptation of The Appendices from JRR Tolkien’s The Lord of the Rings, finally revealed itself in grand style this past week. Amazon’s production unit is charting a course similar yet different to what has come before, and they opted for a focused event to reveal their secretive show.

TheOneRing.net joined a group of Tolkien scholars , creators and fans assembled by Prime Video, to see finished footage and chat with the elusive Showrunners. What we saw felt very familiar. This show has thankfully avoided video-game look of 3D HFR 48fps, is visually in line with the Oscar winning trilogy, and it also avoids looking like other big-budget fantasy shows currently trending. New Zealand’s landscapes are put to good use just as we desire. For fans of Lord of the Rings, this new Rings of Power looks like it should, sounds like it should, and feels like a return to the comfortable universe we all love.

The event footage shown feels like a homecoming, in part because the audience was filled with Tolkien community. Fan sites and tiktokkers alike were flown in from around the world to experience this first look together - a risky move considering how fiercely loyal core fans are to the original texts of JRR Tolkien - and yet it was the best group to see it with. There have been hundreds of hours of podcasts and YouTube videos sharing reservations and fears for Bezos’ billion dollar bet, and many of those voices, there in person, were preparing to snicker with each other. The darkened theater instead sent us right back into Middle-earth, as some folks elbowed and smiled at each other with what they were seeing.

Is the hype real?

What we saw was footage, instead of complete episodes as Vanity Fair’s Joanna Robinson saw back in February. But it was *completed* footage, with orchestrated score and finished VFX. The earlier released Super Bowl trailer revealed many things from early spy reports - you can go back and review some of those spy reports here on TORn - and the quality of this new footage was no less epic.

The good news is: the hype could be real, if the complete show (or even complete scenes) maintain the quality, look and feel of the footage shown. The vibe is right, the performances are superb, and the characterizations hint at resolving long-held gripes of previous adaptations. Taking the pulse of the Tolkien fan group assembled, nearly all shared an increased hype level. The biggest fears they shared have been calmed, and this lucky group are now comfortably anticipating future drops of RoP marketing.

Prime Video is putting to good use Amazon’s billion dollars, in unexpected ways. The pandemic affected production, but it has also affected all of us. So it was quite the delight to finally commune with fellow Ringers after three years of limited travel and accessibility. It was great to talk about our greatest fears for the show at the start, and find that many of us were on the same page; then extra delight to talk enthusiastically about what we had just seen near the end of the visit. Seeing Middle-earth’s Second Age brought to life will always be better when watching with friends.

Invaluably, Amazon has managed to unite Tolkien fandom in a way only they can, with their seemingly infinite budgets. Bringing us out of the purely digital lives we have all lived during this pandemic, together to share our fears and desires, has rekindled a love for sharing in Tolkien’s world that may have been dimmed by unending social media discourse.  Amazon said a lot without saying directly much, using their deep resources in a wizardly way to get a bunch of hobbity fans out of their door; and as a company they are starting to show an awareness of who this show needs to speak to.

Why So Seriously Secret?

This may seem like a bunch of words that don’t actually say much, but that’s how Prime Video is playing the marketing of this show. In exchange for a trip and a look, they asked us to post vibes and no details. I have a feeling this may be the first of many secret previews in the coming months, to a wide variety of fans, influencers, press, and Proudfeet! Overall this was a fantastic first step, for many reasons we cannot yet reveal. Hopefully the many opinions about to be shared by leading Tolkien fan voices will calm some nerves, as The Rings of Power finally begins to reveal itself. To Patrick & J.D. - you can finally breathe easy: so far, we like what we see, and we think fans are really going to enjoy this trip into the Second Age of Middle-earth.

Join us on our message boards, or on Discord, to chat about what may be coming in September...