Super Mario Odyssey – I bought this once I heard the price had come down somewhat, as I’ve been interested in it. I’m a Mario fan, but I’m generally really bad at the games, so I’m kind of relieved that I’ve actually been able to get somewhere in this one. We’ll see how long that will continue. Don’t get me wrong, as I’ve still died a lot, but you can immediately try again at the cost of a few coins, with no game over. Apparently the rate for extra lives has gone down quite a bit. The plot starts with Bowser…well, you can probably guess, even if you haven’t played this one. But he also decides to steal a bunch of priceless artifacts from around the world to use as wedding accessories, and hire a family of rabbits to serve as wedding planners. 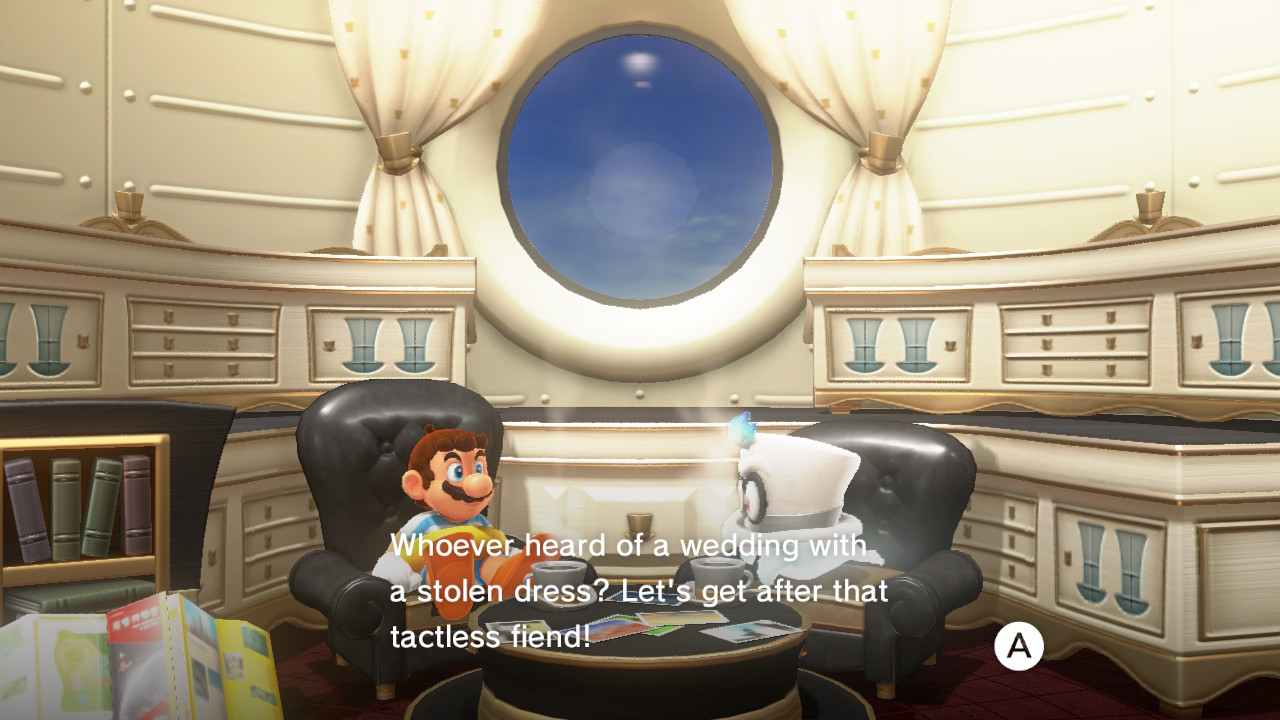 Apparently he thinks the problem isn’t that Peach doesn’t want to marry him, but that his wedding plans haven’t been fancy enough. He’s probably been reading magazines about this. The story starts out in the middle of the action, with Mario fighting his nemesis on an airship above the Mushroom Kingdom. Bowser trounces his opponent and knocks him down to Bonneton, capital of the Cap Kingdom, also ripping his hat in the process. Fortunately for him, a ghostly hat named Cappy agrees to team up with him, and he has a stake in the adventure as well, as King Koopa also kidnapped his sister Tiara. Cappy not only serves as a projectile weapon that you can use pretty much anytime, but also gives Mario the ability to possess living beings, a twist on the power-up concept. He also helps the hero find an old airship, the Odyssey, in order to chase after Bowser and the Princess. It runs on Power Moons, and a lot of the game consists of trying to find these. How challenging this is varies considerably, with some being really straightforward and others requiring a lot more effort. 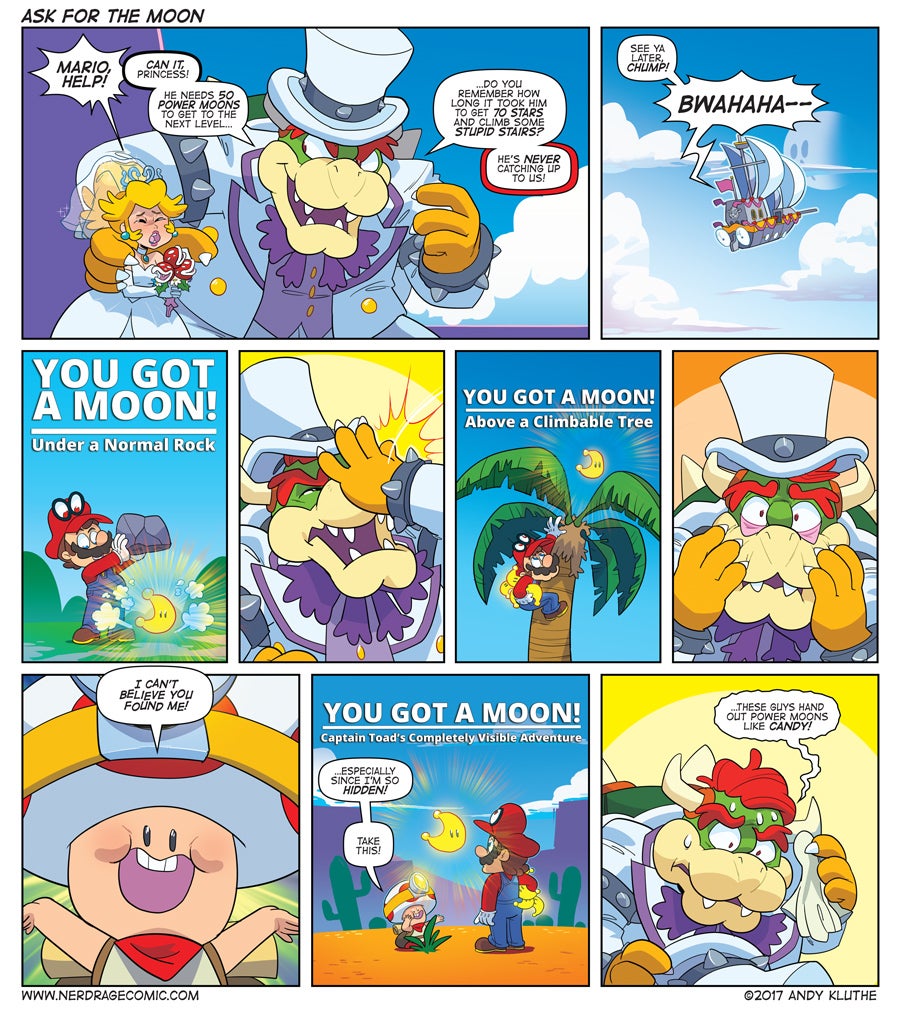 I’ve gathered enough to proceed from the Cascade Kingdom to the Sand, Lake, and Wooded Kingdoms; and I last left off before a battle with Bowser in the Cloud Kingdom. But there were extra moons on which I gave up after a few tries, like the one where you have to ride a really fast Jaxi around a maze, and another with invisible bridges. 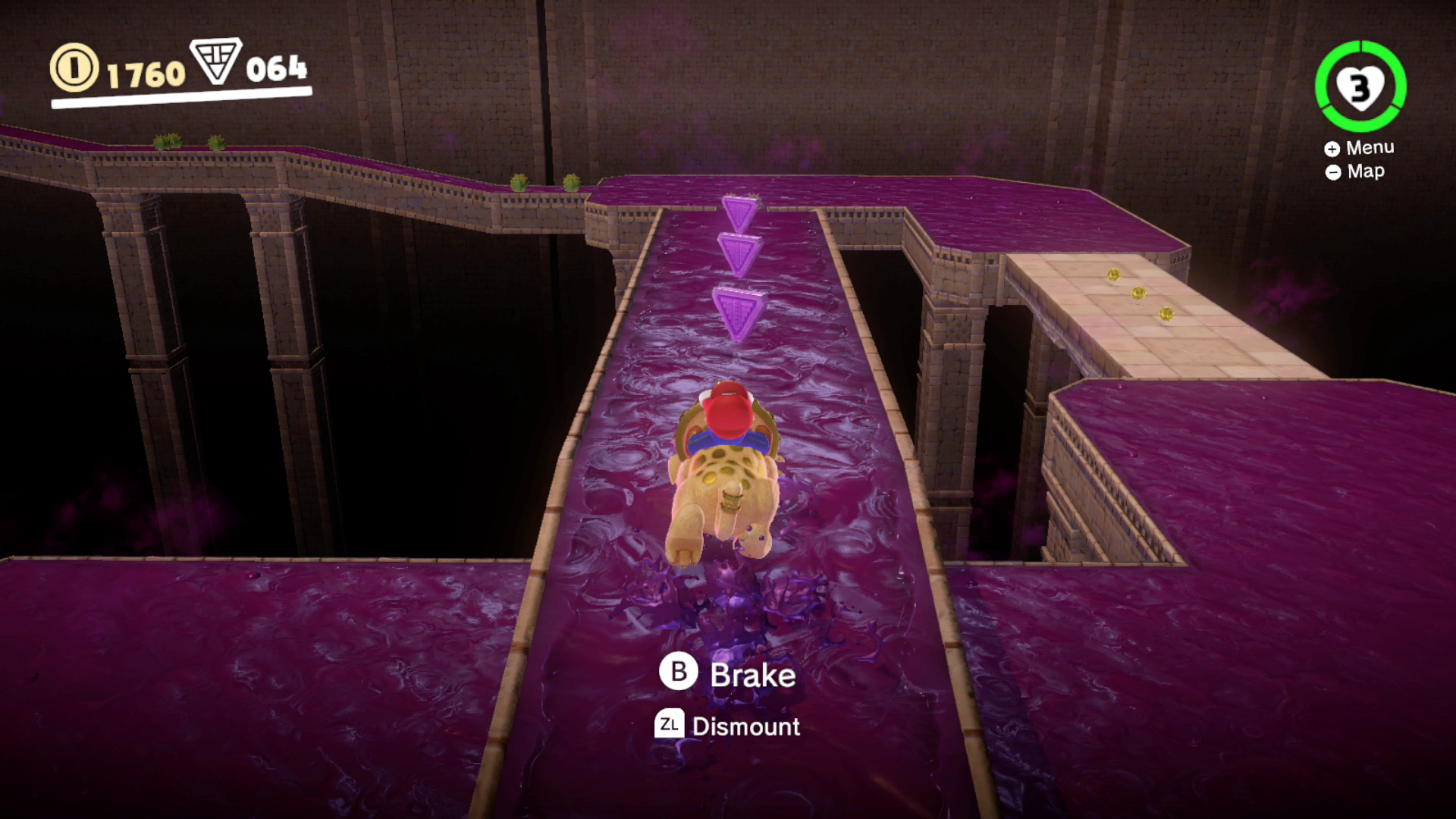 Each country has its own environment, culture, and inhabitants, with information given on brochures you can access in-game. The boss fights so far have mostly been against individual Broodals, plus a giant stone head and a UFO. That last one, the Torkdrift, took me several tries. I’m never very good at jumping over expanding energy rings, and the way the Uproots work means the timing has to be even more accurate than usual. 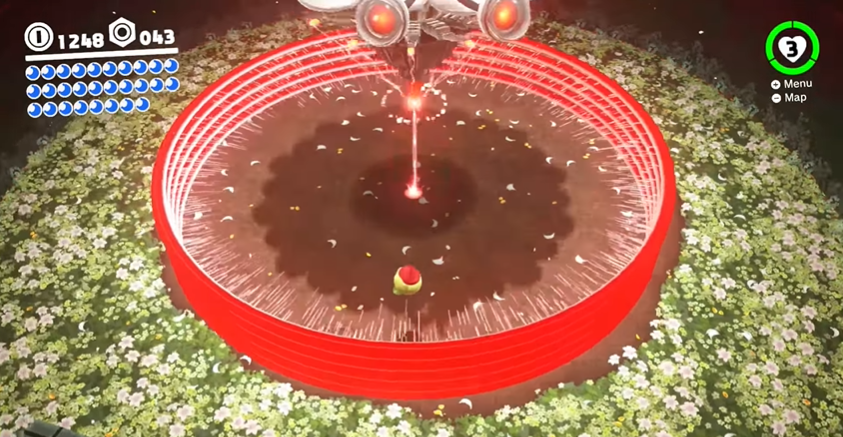 There’s a lot of emphasis on exploration; the explorable areas aren’t all that big just to get across, but there’s stuff hidden all over. So far, I’ve been playing in handheld mode with the JoyCons connected, so I haven’t been able to use any of the special motion controls, but I’m afraid I might have to eventually. I’m still not really used to that kind of thing. At least there’s an easy way to see all possible moves. I have memories of when I played Super Mario RPG, which I bought used without a manual, and getting stuck at Booster’s Tower just because I didn’t know you could hold down a button to jump higher.