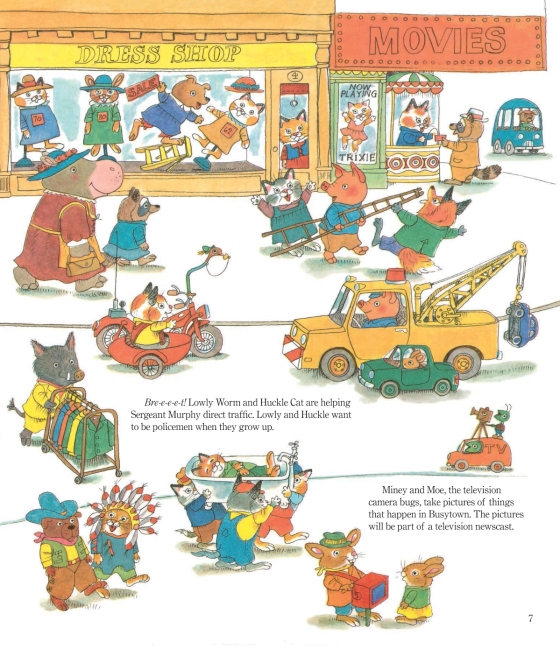 The World Is a Very Scarry Place

I’ll occasionally see references to Richard Scarry on Twitter or some other site, and I can definitely remember growing up with his books. I’m sure a lot of people can; they’re just the sort of thing people give to kids. His characters are mostly anthropomorphic animals who work human jobs, with Busytown being the home of many of them. I know there was a Busytown animated series, but I never watched it, although I think I remember getting a glance of it in a restaurant or something. That was in my adult years. There are a few of his books I distinctly remember, like Best Mother Goose Ever, Best Word Book Ever, Peasant Pig and the Terrible Dragon, and Storybook Dictionary. For the latter, I was fascinated by the pages showing all the characters. Cars and Trucks and Things That Go also seems familiar. I also remember being weirdly disturbed by a picture in the quite innocuous Best Counting Book Ever. On the last page, there’s an illustration of one hundred fireflies forming the number 100, but somehow I looked at it many times without noticing this, and when I finally did it was unsettling.

There’s a bit in So Long, and Thanks for All the Fish, Douglas Adams’ later retconned attempt to give Arthur Dent a happy ending, Fenchurch talks about a picture in her bedroom that had an otter swimming in front of a raft full of animals, and she worried about the otter having to pull all that weight, only to finally realize years later that the raft has a sail. It was sort of like that, except the feeling I got from it was the opposite of relief, and I still don’t understand why. It makes no sense, but that kind of thing happened to me a lot as a kid.

So I certainly wouldn’t say Scarry is scary, but there are always going to be dark elements hiding in any bright and cheery fiction. I readthis article on cannibalism in Scarry’s books, particularly the implication that pigs eat pork products. 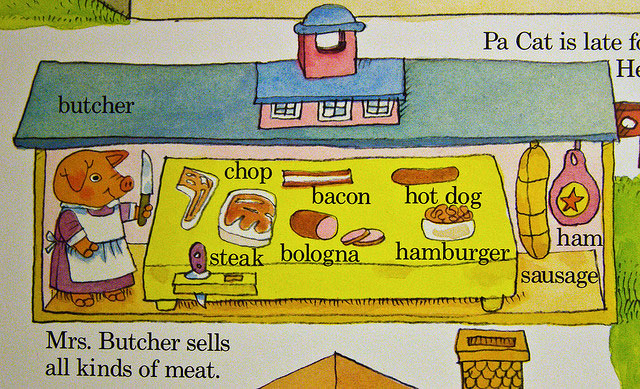 I remember my parents joking when we had pork chops that we were eating Mr. Frumble, but I’m not sure what book I read that had the accident-prone pig in it, as the first one where he’s in the title would have been published several years too late for this. 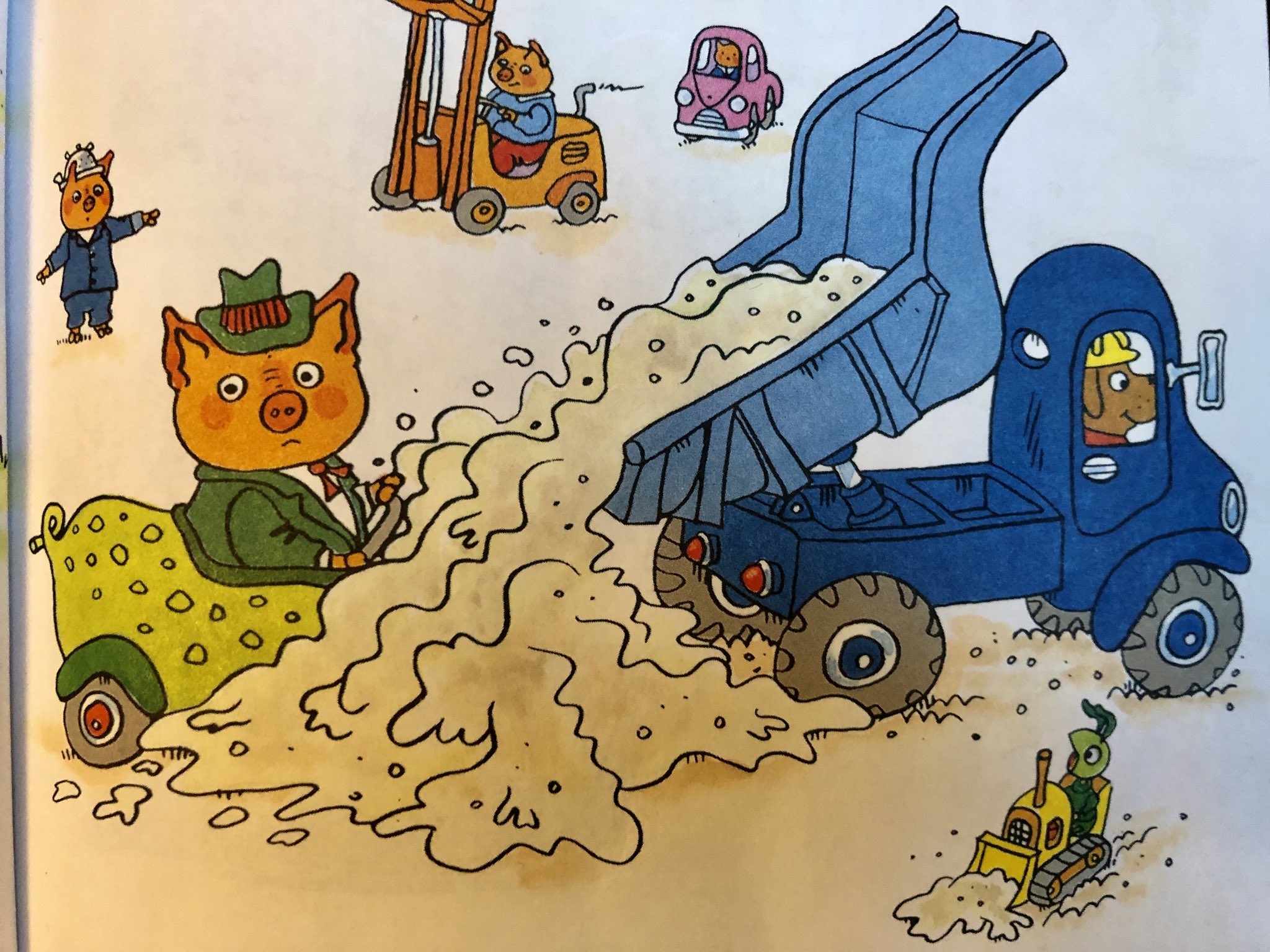 The article claims that there aren’t any chicken-people in this world, but I know there were some in Storybook Dictionary, and they crossed the line between person and chicken a bit, as we can see in this picture.

But then, I believe the copy I had was a reprint of a much earlier book, and I’m not sure Scarry had worked out everything yet at that point. Huckle is the name of a bear rather than a cat, and there’s a worm character who isn’t Lowly. While I haven’t done actual research into this, it seems likely that the Busytown books phased out the bird-people. 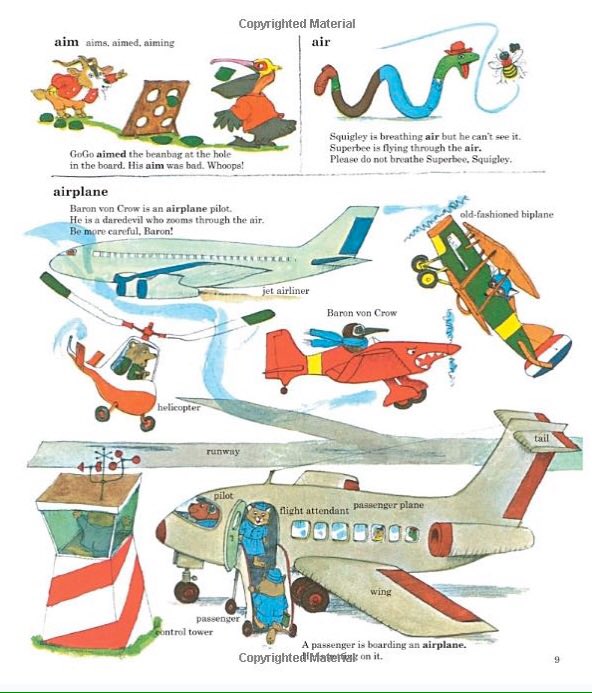 I know Storybook Dictionary had a crow with a World War I airplane, while later material has an Austrian fox with a similar plane.

They still have cats, bears, pigs, and rabbits who are all about the same size, which is pretty normal in such fictional worlds. Mickey, Donald, and Goofy are all human-sized, as are Bugs, Daffy, and Porky, even though they’re supposed to be animals that aren’t at all similar in size. And the animals I mentioned are apparently some of the easiest to make cute and anthropomorphic. It is somewhat different when the size is what makes an animal distinct, so elephants and hippopotamuses are still noticeably bigger than the other people, albeit still much smaller than real ones. 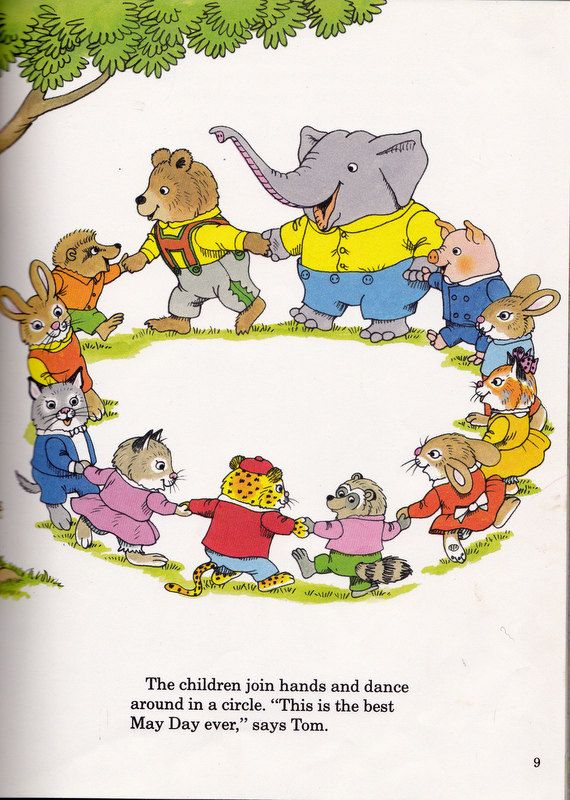 And small animals, like mice and bugs, are pretty much the same size they are in our world, but are still sentient beings who participate in society. They also tend to drive cars that are just big enough for them, which seems like it would cause some traffic problems. And really, it does.

Traffic cops show up on occasion, but there don’t appear to be marked lanes or anything. Some of the more interesting vehicles include Lowly Worm’s apple (which was later established to turn into a helicopter), Mr. Frumble’s pickle, and Bananas Gorilla’s…well, banana. The connections between the animals and the cars is generally pretty obvious (the pickle is probably a reference to Frumble constantly being in a figurative pickle), but do mice drive pencils and crayons just because they’re small? There’s even one character, Dingo Dog, whose main trait is that he’s a reckless driver. And Bananas was established to be a thief, always stealing his fruit of choice and throwing the peels at pursuing police officers. 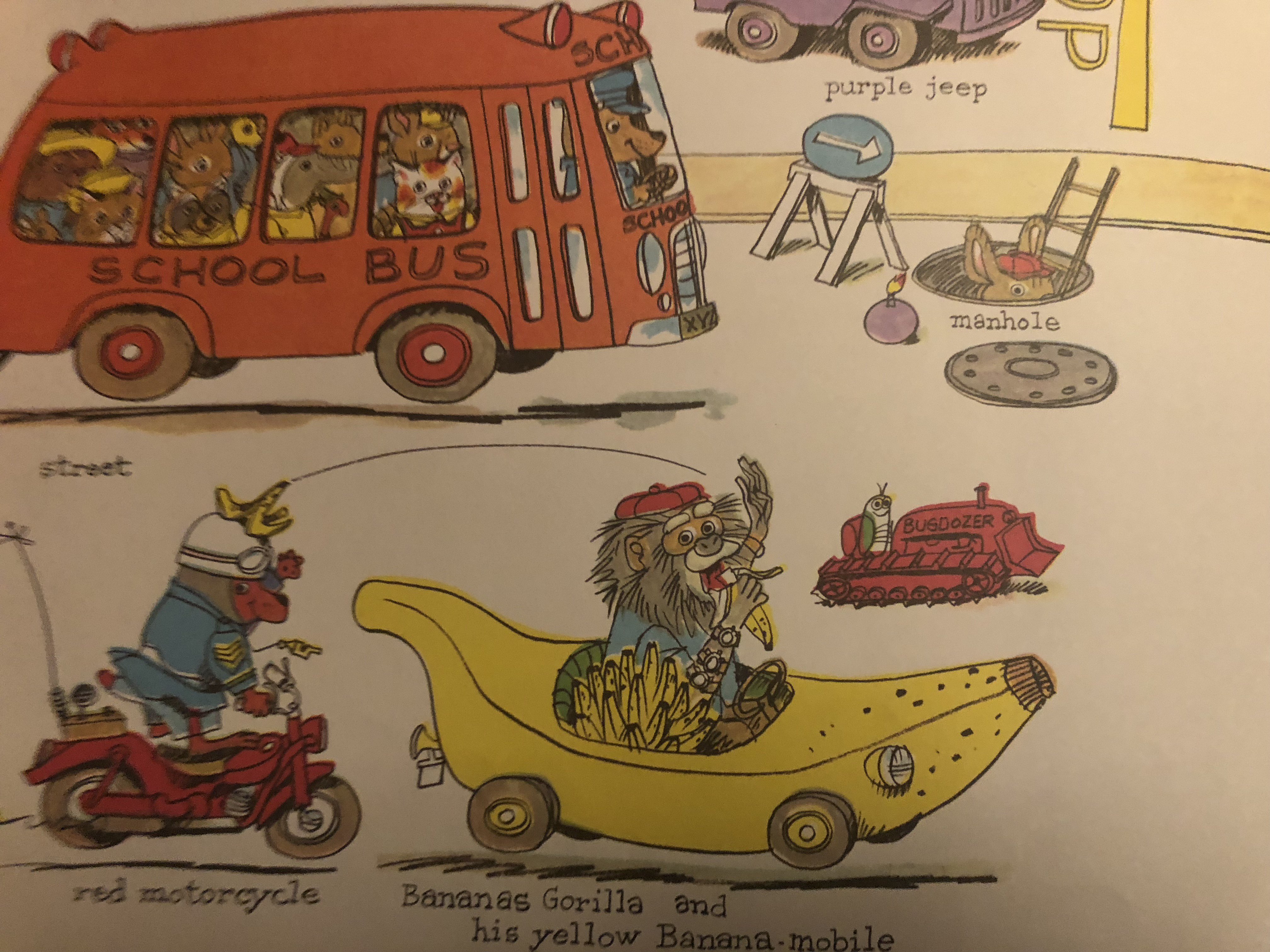 But he’s also characterized as rather childish, like he doesn’t entirely realize that what he’s doing is wrong. The Three Beggars, who are a wolf, a baboon, and a hyena, have some of the same sort of naivete.

Lowly might be the most memorable character, but there’s a lot about him that’s confusing. Not only is he a worm who wears a boot, but he’s often the ONLY character shown to have footwear. He goes to elementary school with Huckle Cat, but drives a car and is sometimes shown doing jobs. 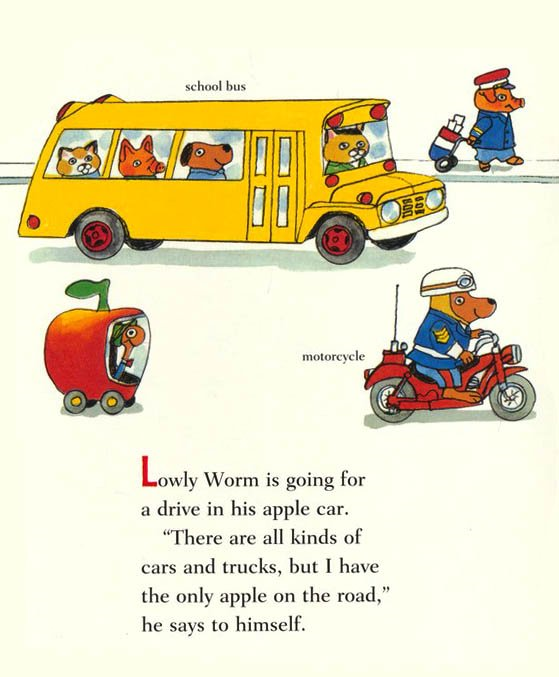 And he’s said to be a frequent guest of the Cat family, but I don’t know that we see HIS family or home. I’m not saying we definitely don’t, as there are a lot of books with him in them, but the contributors to this thread hadn’t found anything of the sort. 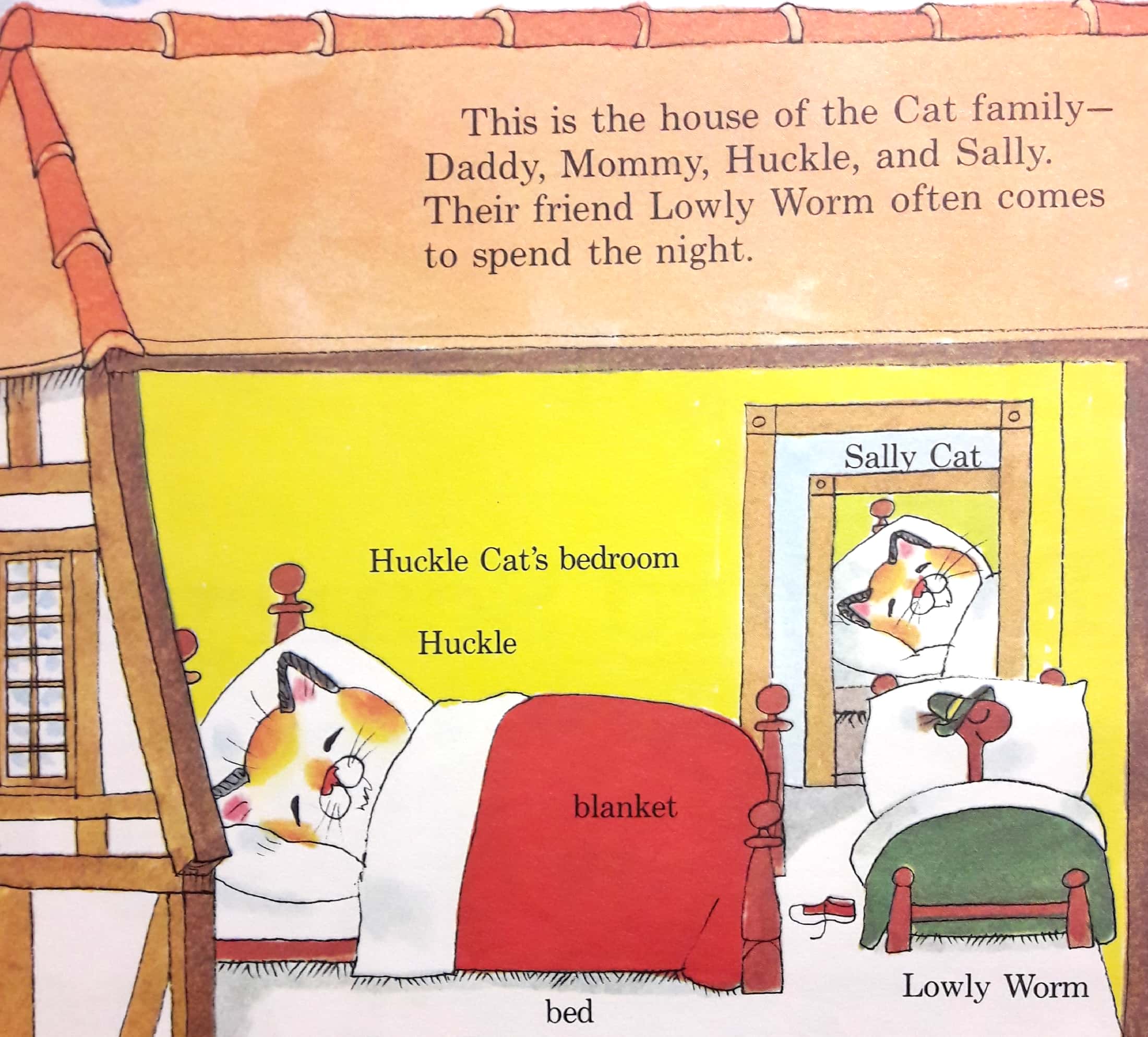 The World Is a Very Scarry Place