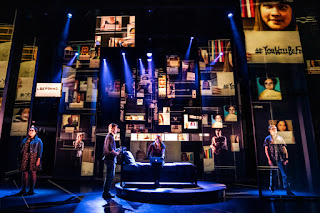 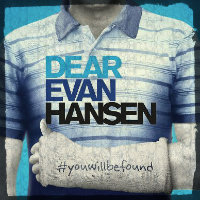 Following The Book of Mormon and Hamilton as the hottest ticket on Broadway, it's inevitable that Steven Levenson (book,) Benj Pasek & Justin Paul's (music and lyrics) Dear Evan Hansen would make its way to the West End sooner rather than later, but there was always a question mark over whether this particular show would connect in the same way with a British audience. I can see how it might share the fate of the painfully earnest Rent, which has a dedicated UK fan base and has had a couple of decent runs here but never became what you might call an equivalent phenomenon. I have heard some Marmite responses since Michael Greif's production opened at the Noël Coward, but thanks to the way the world's been changed by the Internet - and the way it affects the musical's story - Evan Hansen's story could end up striking a chord everywhere.

17-year-old Evan (alternate Marcus Harman) is a desperately lonely high school student, whose single mother Heidi (Rebecca McKinnis) is juggling so many jobs they barely see each other. His only real friend is Jared (Jack Loxton,) but the politics of high school mean they don't acknowledge each other there. Evan is in therapy to deal with his extreme anxiety, and has been given a project to write himself letters that build up his confidence, but finds it hard to write anything that doesn't dwell on the worst. When another outsider, Connor (Doug Colling) steals a particularly bleak Dear Evan Hansen letter before killing himself, it's assumed it's his suicide note, and as he addressed it to Evan they must have been friends. Evan goes along with it, initially because he thinks it's the right thing to do to give Connor's parents some comfort, but the lie soon spirals out of control.

On the one hand, Evan gets a lot of benefits out of the deception: Connor's parents (Lauren Ward and Rupert Young,) who never had a good relationship with their son while he was alive, all but adopt his "friend," giving him a fake family life he always wished for; while his proximity to tragedy gives him a kind of celebrity at school, something his pushy classmate Alana (Nicole Raquel Dennis) is also actively trying to take advantage of. On the other, the story of the boys' secret friendship does give genuine solace to many people feeling isolated; a speech Evan makes is filmed and goes viral, which makes him an inspiration but also takes the story way out of his control.

There's no doubt the way the story essentially lets Evan off his behaviour is problematic, especially with regards to Connor's sister Zoe (Lucy Anderson,) who just happens to have been Evan's long-term crush, and whom he starts a relationship with while she's vulnerable. The show also makes liberal use of Ho Yay in the imaginary Evan/Connor relationship, while also maintaining the plausible deniability that it's an entirely heterosexual story, but the script does at least kind of acknowledge that. And I'm not even sure what to make of the treatment of Heidi, who on the one hand feels pretty harshly treated for someone struggling to make ends meet, on the other spends so little time with her son it takes her weeks to notice he's effectively moved out of the house. Of course, Pasek & Paul are no strangers to a problematic show, and for me the canny way Dear Evan Hansen looks at both the way people will embrace a fictionalised version of a dead loved one, and the cynical way others will exploit the death, just about tips the scale in its favour. 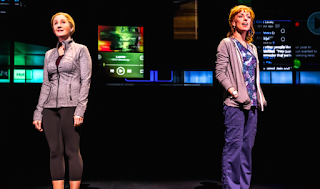 Of course there's also the fact that it's a musical, and the quality of the songs can go a long way, and this is one full of strong numbers. There's three major crossover showstoppers - "Waving Through a Window," "For Forever" and "You Will Be Found" - all in the first act, with most of the songs catchy and springing naturally out of the action. The show passes with flying colours my "how many of these songs will end up on my iPod?" test, something not many musicals have done in recent months. The sentimental nature of many of the numbers is counteracted by the very dark context, so in some ways the story's problematic elements work out in the show's favour, and it doesn't suffer from the painful earnestness of the aforementioned Rent. Peter Nigrini's projections of social media slide around David Korins' set in a way that makes you constantly aware of how the characters are surrounded by pressure to live up to all kinds of popularity. The chat windows' omnipresence did make me feel the design team had somewhat overestimated the part the internet plays in the story, but it does give the show a distinct visual identity: I've seen a lot of plays start to use the internet as a setting in this way, but can't off the top of my head think of a big-budget Broadway musical import that looks quite like this.

The idea of turning an unknown into the next big West End star is a classic publicity approach that has been used in recent years for Half a Sixpence and Joseph, so it's not surprising that this is marketing itself heavily on Sam Tutty (you may notice the lack of promo photos breaking up the text, I could only find one without Tutty in it,) but it's a shame this means Marcus Harman*, who leads at least two shows a week, and the other understudies, will be greeted with audible disappointment by some of the audience who spot the name on the cast board. You certainly won't feel short-changed if you get Harman in the lead, he's got the combination of charisma and vulnerability needed to carry a lead as morally ambiguous as this, and needless to say the voice. He's backed up by an equally strong cast in a show that might trip itself up a few times, but does so because it's more ambitious in the complexity of its themes than most Broadway hits. (Plus, bonus points for being one of the few things you'll see that bothers to take the advice of every suicide prevention charity, by spending precisely zero time discussing the actual method of Connor's death.)

Dear Evan Hansen by Steven Levenson, Benj Pasek and Justin Paul is booking until the 30th of May at the Noël Coward Theatre.

*any relation to Nigel Harman? At times there's a real resemblance.