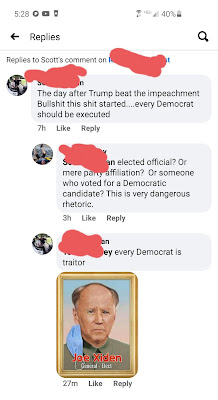 There's No Reasoning With These People

I took the screenshot of an exchange of comments I had in someone's Facebook post (and which will be the subject of a separate post on this blog).  As you can see, the commenter declared that "every Democrat should be executed."

I was curious to see if he meant Democratic politicians or anyone who is a registered Democrat, and in reply to my query, he made it clear that he meant all of them.  So, this psycho believes that tens of millions of Americans should be murdered for their political affiliation.  And I am sure he is not the only one who feels that way.

Personally, I have been registered as a non-affiliated voter for the better part of the last two decades, though before that I was a registered Republican who tended to vote for Libertarian candidates when they were on the ballot.  However, after George Bush invaded Iraq in 2003, I have voted for Democratic candidates in every presidential race from 2004 to the present.

While the political divide has always existed in America, what the Trump presidency, and in particular, this last presidential election, has exposed is that there is a fair number of people in this country who view many of their fellow Americans as an enemy to be eradicated.

One of my operating theories about ardent Trump supporters is that he is their vicarious instrument for hurting the people they hate.  For example, when California suffers from devastating wildfires, Trump threatens to withhold federal aid because of some apparent failure to rake the forests, and Trump supporters are okay with that, because after all, California is home to left wing Hollywood supporters that they hate.  Egging on self-stylized civilian militias in Michigan to liberate their state, which emboldened some of them to plot to kidnap the state's governor, is not a deal breaker for them.

And then there is the prevalent view among them that the election was stolen from Trump and that Biden is an illegitimate president, even though Biden ended up amassing more than seven million votes than Trump.

I have long considered myself to be an optimist, but I am starting to fear for my country.

There's No Reasoning With These People