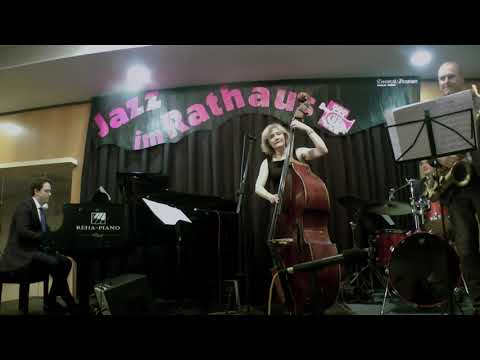 I’m pleased to share with JAZZ LIVES’ readers (and watchers) a complete set from a few years ago — from only my second trip to Germany. Both times I ventured out of my nest because of the kind urgings of Manfred Selchow, concert producer extraordinaire. Even if you’ve never been to one of Manny’s concerts, perhaps you’ve heard the results as issued on a long series of irreplaceable all-star Nagel-Heyer CDs. He created a weekend of rewarding jazz concerts in “the Town Hall,” which carries with it a wonderful resonance of Louis and Eddie Condon and many others in performance.

And here is a very recent photograph of Manfred and his wife Renate with the wonderful drummer Bernard Flegar:

This little band features Stephanie Trick and Paolo Alderighi, piano; Engelbert Wrobel, clarinet and saxophones; Nicki Parrott, string bass and vocal; Bernard Flegar, drums. And the program is so delightfully varied: no one could say these songs are new, but the energy this band brings to them, the cohesive joy, is very special. I’m grateful to the musicians for their for their generous music (and permission to share this set) and to Eric Devine for technical wizardry.

Before we move to the music, a few words. I’m always pleased when jazz fans go beyond their love for “the locals” which can, at worst, become provincialism, to discover worthies who don’t live ten miles away. Nicki, Stephanie and Paolo, and Engelbert (known as “Angel” to his friends and for good reason) all have their enthusiastic constituencies: some of this due to excellent recordings, often on the Arbors Records label, some due to what I would guess are exhausting touring schedules.

But Bernard, who has visited the US but not toured there, might be less well known, and this is a deficiency to be immediately remedied.

He is what the heroes of our jazz past would call someone who kicks the band along — but he is not a noisemaker. Ask Dan Barrett, Allan Vache, Menno Daams, Chris Hopkins, and others and they will tell you how sympathetically he listens, in the grand tradition, how he seamlessly merges what he has studied of the great percussive history into his own sound and approach, and how gloriously he swings.

You’ll hear for yourself, but if you ever begin to lament that the great drummers are gone or aging, explore Bernard’s work as documented on CD and video — and he is now an essential part of a new band, Armstrong’s Ambassadors, also featuring Angel (Matthias Seuffert is in the 2020 video), Colin Dawson, and Sebastien Giradot. (The band name should tell you all you need to know about their affectionate reverence for a certain Mister Strong.)

But let’s go back to 2016 for some elegant hot diversions.

Stephanie joins in the fun for HONEYSUCKLE ROSE:

A band-within-a-band — Paolo, Nicki, and Angel — for OVER THE RAINBOW:

THE MEN I LOVE, announces Nicki — with happy glances at Paolo, Bernard, and Angel:

and finally, a swing declaration of intent, with everyone playing AMEN — I WANT TO BE HAPPY:

And to move us forward to the present and future, here’s an almost nine-minute sampler of how splendidly the new band, Armstrong’s Ambassadors, pays swinging homage:

Wonderful music from Nicki, Stephanie, Paolo, Angel, and Bernard — all of them still flourishing and expressing themselves so well — and from this new band. Hope springs, doesn’t it?