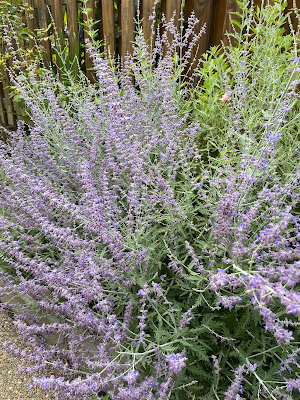 First, an update: Two days have passed and 60 rows have been worked on my wrap. I'm right on track and expect I will have a significant update for you early next week.

It's Thursday, so I am linking up with Carole for Three on Thursday this week with something a little different.

I have long thought of myself as a bit of an environmentalist. I was one of those annoying kids who was telling you to recycle, and I've turned into one of those annoying adults who has no qualms about pulling things out of the trash that should be in the recycling bin and vice versa. While I haven't explicitly taught Rainbow to be like me, I'm delighted that she's taken the message of environmentalism so much to heart and has pushed me to do better. So I wanted my three items today to be the so-called three R's: reduce, reuse, recycle.

1. Reduce
I have really been making a concerted effort the past few years to reduce how much we throw out in the trash. Nearly all of our food waste gets tossed into the composter -- fruit and vegetable scraps, coffee grounds, bread that's gone stale, etc. I also occasionally add paper like newspaper and the paper trays that produce often gets packaged in. Come fall, I add in leaves and yard waste. I have yet to actually use any of my compost, but I also have yet to fill the container up and have it stay that way, so I know stuff is breaking down well.

I've also been trying to have a "make do and mend" mindset. I am more likely to sew up/darn holes in clothing, which is really helped by the fact that visible mending is very in right now. When there's an item that really isn't salvageable, I try to see if it can be useful in another way (as cleaning rags or stuffing for well-loved stuffed animals, for instance).

2. Reuse
This has long been a practice in our house. We have the reusable water bottles and mugs (and use them pretty much every day). We take cloth bags to do our grocery shopping. But here's an area where Rainbow has made us better. She asked if we could get some more cloth napkins to use on a daily basis. I had bought a handful of cheap ones from the Target Dollar Spot a while back, but we only used them when we wanted to feel a little fancy and used paper napkins most of the time. After she expressed this desire, I ordered a set of 24 cloth napkins -- not particularly fancy ones, just ones with printed designs on them so that any stains wouldn't be too obvious -- and we've been using them ever since. I try to use just one a day (so for three meals) if I can, and the dirty ones get placed on top of the washing machine so they can get thrown in with our regular laundry. Plus I also find ironing them to be strangely satisfying, despite the fact that I normally hate ironing. Rainbow has also asked that our next step be to replace the Dixie cups we use in the bathroom with washable cups as soon as our supply runs out.

3. Recycle
I've been known to be a little militant about recycling, and anything that possibly can be recycled is in this house. We are even recycling all the paper Trader Joe's bags we got when we were allowed to use the cloth bags by using them as liners for our inside receptacle and then placing the filled bags into our city recycling bins that we put out at the curb. I've been a little disappointed that our city's rules have changed in the past year and there are some things that we used to be able to put in the bin and now can't (like the clam shell plastic packaging that berries and grapes often come in and the plastic cups that yogurt comes in). I recently heard that there is an organization that does a collection of some of these plastics a few times a year and will be looking into that. I am glad that our city is determined to go plastic bag free in its recycling collection and has been distributing the big blue bins to all residents free of charge (did you know that those blue plastic bags that they told us to put our recyclables into for so many years are not only not recyclable themselves but actually jam up the machinery used to sort items in the recycling?).

The photo at the top of this post has nothing to do with the three R's, but it's relevant to the general efforts to be kind to the Earth. This patch of Russian sage originated on our neighbor's side of the fence. For years it kept creeping under to our side and I kept pulling it out. One year I just let it go because it was pretty, and since then I've discovered that the bees love it (and we all know how important bees are to our ecosystem). Last year I transplanted a couple of sprigs of it to our backyard, and I was delighted to see that they were still alive this year. I'm hoping that in a few years we have a bit patch of it and have a garden that's friendly to pollinators.

If you have other suggestions for how we can all reduce our footprint and be good stewards of the Earth, I'd love to hear them! I hope you all have a good end to your week and a relaxing weekend.