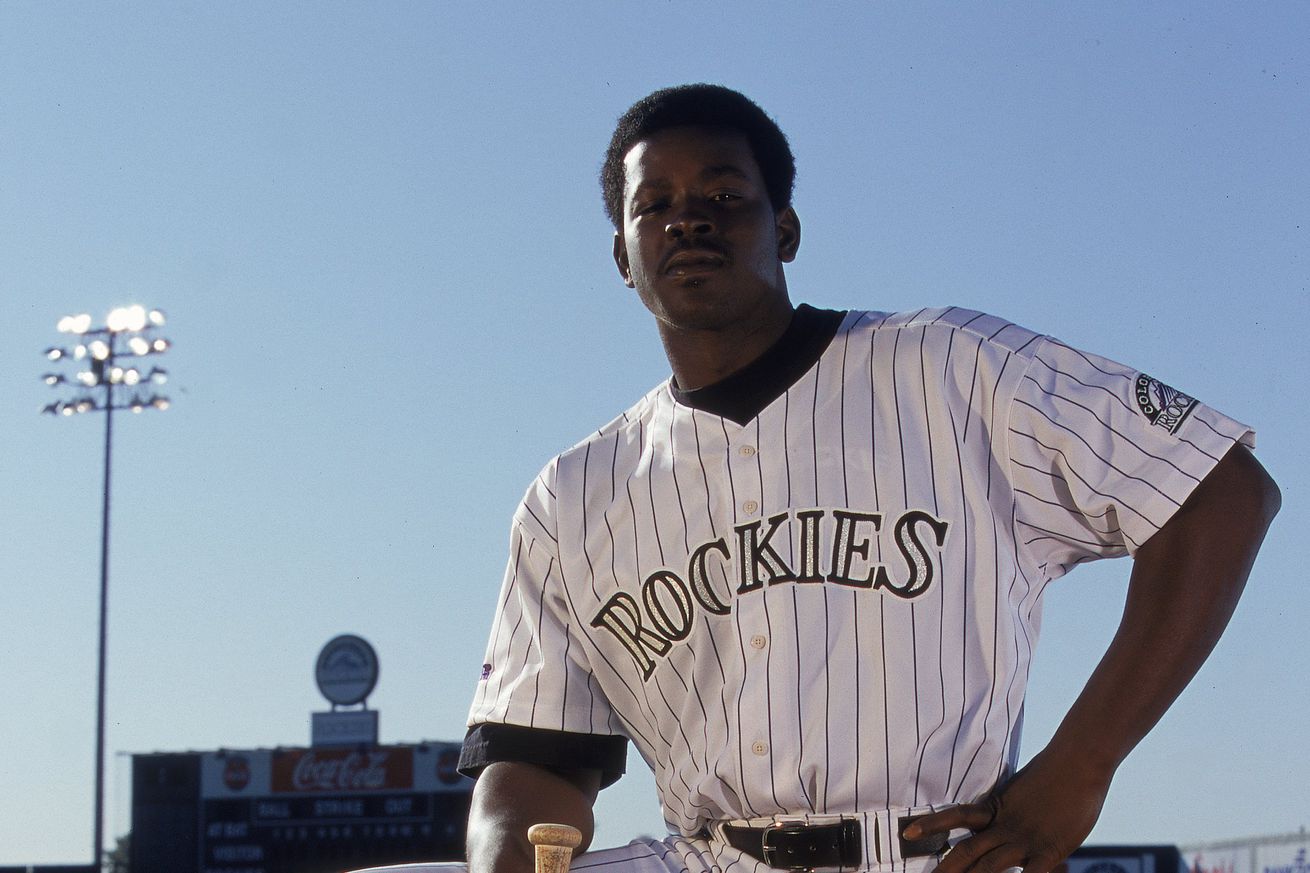 In a sport where—until recently—there are forty rounds in a draft, Major League Baseball teams sign a lot of young men with the hopes that a handful of them will develop into their next superstar player. It’s far from sure, but occasionally teams will land a player that you are just convinced will be the next big thing for your team. The Colorado Rockies are no exception, and the idea for today’s topic comes from @rocktober19 on twitter:

When I was a kid I was absolutely convinced this guy was going to be a superstar.

What player were you convinced was going to be a superstar that never panned out? pic.twitter.com/EM0R9IqD5i

Pretty much every sports fan has their one guy they were absolutely sure was set to be a star, and it’s a fascinating topic. We’ll start with the player selected by the poster himself. If there is interest then I will definitely revisit this topic in future Rockpiles, and you can leave your suggestions for future iterations in the comments!

Gibson broke out in the minors with the Class-A Asheville Tourists in 1995. In 135 games that season he slashed .292/.350/.533, led the Tourists in hits and led the team in both RBI and home runs by a country mile. Gibson hit 32 home runs, while the next highest was eight, and Todd Helton only hit two. He also showed blistering speed with a team-leading ten triples and 31 stolen bases.

After a strong 1998 season with Triple-A Colorado Springs, Gibson earned a September call-up. He made his debut on September 8th against the Florida Marlins with a 4-for-4 game, hitting a double and driving in two runs. He finished the season having gone 9-for-21 in seven games, slashing .429/.478/.476. However, Gibson didn’t start the season with the big league club in 1999. In fact he barely sniffed the majors in 1999, where he played just 10 games while slashing just .179/.207/.429. He did strike his first two big league home runs, but he only played one game with the Rockies before September. Gibson would never see the majors again.

Gibson was unfortunately a corner outfielder, both corners of which were quite securely locked down by Larry Walker and Dante Bichette in 1998 and 1999. There may have been space for him in the 2000 season, during which an injured Walker played just 87 games, but Gibson had been waived and claimed by the Florida Marlins before the season began. The Rockies could have tried shifting him to center field, where they had more of a need, but he never played the position while with the organization He would spend the rest of his career bouncing around the minor leagues for various organizations such as the Anaheim Angels, Arizona Diamondbacks, and Atlanta Braves, ironically picking up center field in the process. He also played in Mexico and in independent leagues until he retired from baseball in 2007.

Gibson’s career stat line after just 49 at-bats left him with a slash of .286/.327/.449, with two home runs, eight RBIs, and a career rWAR of 0.3. Had the Rockies given the once top prospect more playing time, facilitated by a move to center field, it’s possible Gibson could have found his rhythm in the major leagues and enjoyed a much longer career. Center field in 1999 and 2000 was held down by Darryl Hamilton and Tom Goodwin respectively, neither of which played more than a 100 games during that season.

Bill Schmidt on the Rockies’ winter: ‘We just need more pieces.’ Here’s their plan | The Athletic ($)

The Athletic’s Nick Groke lays out the Rockies’ plan for the winter as told by new general manager Bill Schmidt. Schmidt believes he can convince free agents that the Rockies are closer to contending than people think, and that their additions will push the team back into a contention window. It appears he will focus on the addition of an outfield power bat. Schmidt also discusses his approach to the possible coming of the DH to the National League: the DH is more of a rest day for stars like Charlie Blackmon and CJ Cron, rather than a dedicated roster spot.

We were all a little baffled when the Denver Post revealed on Tuesday that general manager BIll Schmidt said the team was considering moving Ryan McMahon to shortstop. Over at Rox Pile, Noah Yingling discusses these comments and what it could possibly mean for the future of the organization. These comments could signify the Rockies find the current free agent shortstop market a bit too rich for their blood, or might not trust other internal shortstops like Garrett Hampson with the daily duties. There are also rumblings of the Rockies being more of a player in the third baseman market.

In the penultimate game of the 2021 Arizona Fall League, shortstop Ezequiel Tovar had the day off while Ryan VIlade started at first base (a position he’s been picking up this year) and Michael Toglia was the designated hitter. Toglia was 2-for-4 with two singles, and Vilade was 1-for-4.

Today is the final day of the Arizona Fall League, and the Rafters will be taking on the Mesa Solar Sox. First pitch is at 6:35 MST.