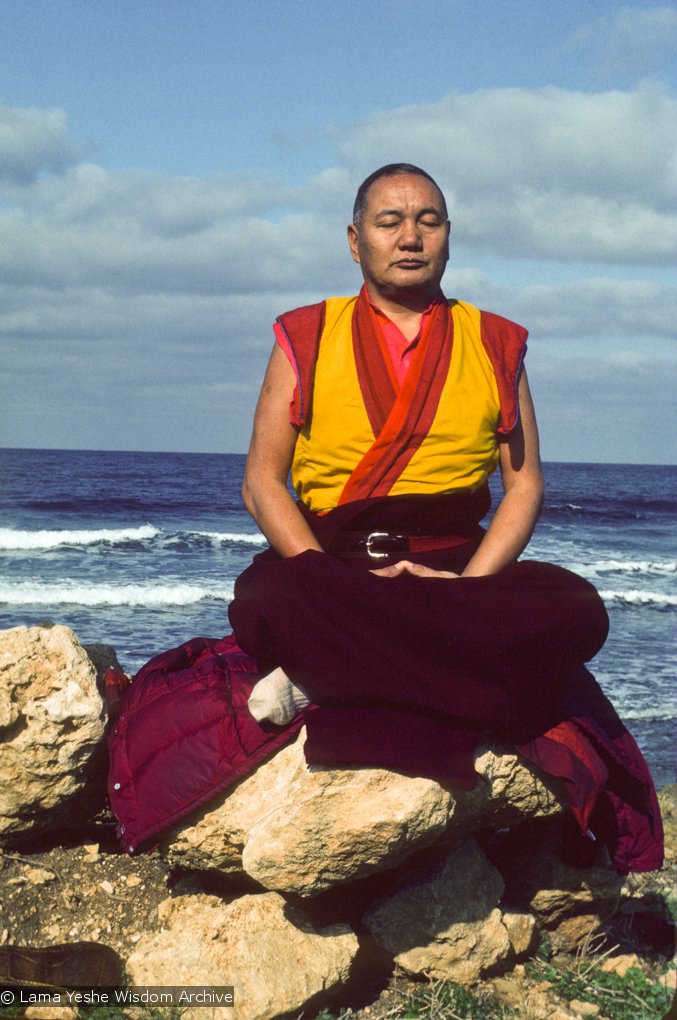 Lama Yeshe discussed how to deal with fear and anxiety in the context of the nuclear arms race and nuclear power at a talk given in 1983 in California, US. While today’s situation is different, Lama Yeshe’s insights are just as powerful now as they were when he first made them. Here’s a short excerpt of this talk found in the Lama Yeshe Wisdom Archive multimedia presentation “Switch Your Mind from Emotion to Peace”:

My concern is that if we allow ourselves to be anxious and afraid, emotionally disturbed, we’ll only produce more confusion within ourselves. When we’re confused, we spread confused energy to others and the environment. Bringing peace to the world is no small task. We have to take upon ourselves universal responsibility. As individuals, our first responsibility is to guarantee that we ourselves will never harm anybody else’s life, to generate the indestructible resolve that irrespective of the circumstances, “I’m never going touch weapons or kill other human beings.” We must have that kind of determination. If you don’t feel that way yourself, how can you make a big show if telling others to be like that. It’s not realistic. In order to educate others about how harmful and cruel nuclear energy can be, we first have to educate ourselves.

So, we shouldn’t worry about the nuclear age because it’s already here. We’re human beings; we created this situation. We lit this fire a long time ago. Of course, the earth has contained nuclear energy since it began, but has taken human intelligence to make it as dangerous as it has become. In Buddhism, we call this karma. Once a situation has manifested, the best thing to do is to accept the fact and deal with it.

Now, there’s no reason for us to hate each other, but anxiety breeds hatred. Therefore, we have to check our motivation for demonstrating for disarmament and against nuclear energy. Why are we doing this? Perhaps our reasons are selfish—what we’re really anxious about is our own destruction. Instead, we should have concern for the whole of humanity. That’s the right motivation. Then there’s no emotion. Even though you’re concerned, occasionally fearful, your fear does not come from an underlying, ever-present, emotional disturbance.

What’s the good of worrying about things twenty-four hours a day, disturbing your mind and preventing yourself from having a peaceful and joyful life? It’s a waste of time. Nothing’s going to change just because you’re worrying about it. If something’s already broken, it’s broken. Worrying won’t fix it. This earth has always been destructive by nature, nuclear age or not. There’s always blood flowing someplace or another. Look at world history. It’s always been like this. Buddhism calls this interdependent origination, and that’s how the human mind works.

Take America’s war in Vietnam, for example. That brought people together in a movement for peace. That’s also interdependent. Some people saw the horrible suffering, confusion, misery and destruction wrought by others, so they went the other way, thinking, “That’s not right,” and despite the difficulties, created a movement of peace and love.

But the right way to eliminate harm from this earth is to first free your mind from the emotional disturbances that cause irrational fear of destruction, and then educate yourself and others in how to bring peace to the world. The first thing you must do is to control your own mind and commit yourself: “From now on, no matter what happens, I’m never going to use weapons to kill any human being.” That’s where world peace starts.

Human beings can control their minds and actions such that they will never kill others; people can learn to see that harming others destroys not only the others’ pleasure and happiness but their own as well. Through this kind of education, we can prevent nuclear energy from destroying the world.