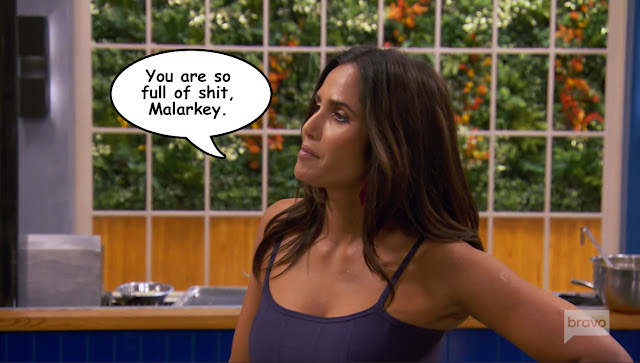 We're at the end of Week 6, both of Top Chef and of attempting to "flatten the curve." I've been teleworking with a heavier workload than usual and my hands are sore and my right arm is achy. I am not feeling this recap at all, mostly because I have to type it. Ouch. But, as they say, the show must go on.

When the Top Cheftestants enter the TC Kitchen, they find Padma with Chris Bianco, "one of America's greatest pizza masters." But no, this isn't a pizza challenge. It's a flour challenge. For this Quickfire, each chef must create a dish that uses any of several alternative flours, but not all-purpose wheat flour. There is no immunity for the winner, but he or she does get $5000.

Malarkey attempts to make ice cream again, and he hopes to serve with it donuts. Coconut flour is essentially ground-up fiber; I think it would be like baking with extra fine mulch. Which is kinda what it ended up looking like. He tells Padma and Chris to close their eyes and pretend he's got a fabulous dish, but they're not fooled. At least his ice cream came out well this time.

Of course he's on the bottom, but then so is my boy Bryan. Voltaggio made a crumble with hazelnut and rye and olives  that he put on fish, which he also served on a pretty green sauce Though it was delicious, Padma and Chris didn't think that the flour portion of the dish was in the forefront. Poor Bryan. 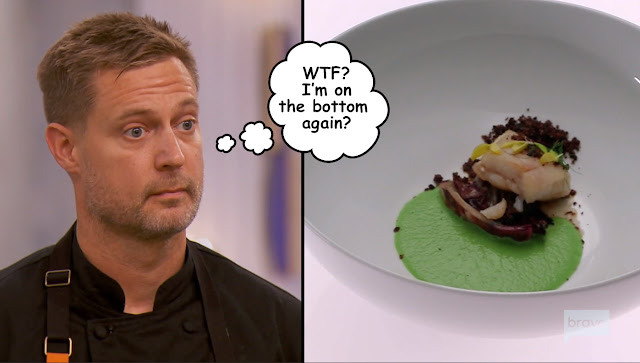 Clever Melissa made the little French almond cakes called financiers with her almond flour. Nini also made something that is customarily made with an alternate flour--Vietnamese crepes, or banh xeo. Padma and Chris enjoyed both, but gave the win to Gregory for his light and delicious tapioca pancakes.

For the Elimination Challenge, the cheftestants will help celebrate the 100th season of the Los Angeles Philharmonic Orchestra. Or the "LA Phil," as Padma called it. Do they really call it that in Los Angeles? The "Phil?" Are they trying to make it sound more hip and trendy? Or are they just too lazy to pronounce the whole word? When she said it the first time, with "Phil" coming at the end of a sentence, I thought maybe the audio had blinked out, cutting off the end of the word. My brain said, "what's the LA fill? are they celebrating a landfill? wait, is this Florida?" Padma then said something about "conductor" Gustavo Dudamel, and my brain understood that "fill" must mean "philharmonic." Which I admit is a mouthful, but damn, people. We shouldn't go around talking like Paris Hilton or Kim Kardashian or whatever piece of uneducated ass is valued by the hoi palloi these days.

The chefs draw knives, each of which is marked with the name of one of the five tastes: sweet; bitter; salty; sour; umami. They then must pair up with another chef with a differing taste in order to create one dish that blends both. Nini and bff Karen get together with a umami/sour pairing. Gregory and Stephanie are working with salty and sour. Lee Anne and Malarkey (who seem like mortal enemies at this point, yet they are so much alike) must work with umami and bitter. Kevin and Melissa must make a dish that sings with salty and sweet. Finally Eric and Bryan are sweet and bitter. And hot and hotter.

Once the cheftestants are paired up, Padma gleefully surprises them with the announcement that this contest will end in a double elimination. Yowza. Those are never fun. Nini reminisces that she was booted last season as part of a double elimination. Maybe "reminisces" is not the right word. In any case, the chefs are then told they're heading to the Walt Disney Concert Hall for inspiration. There, they'll not listen to music, but will be lectured on the subject by Dudamel. After this, they'll shop, and the next day will cook at Timothy Hollingsworth's restaurant, Otium. 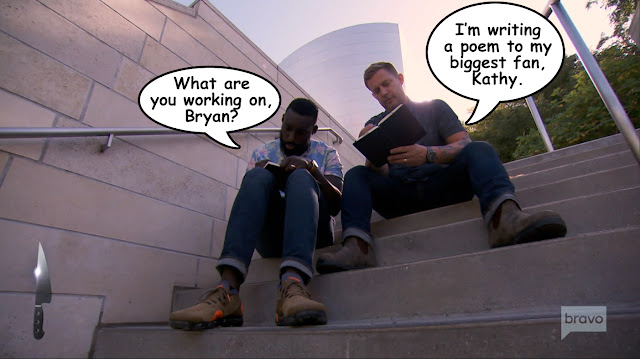 In the WDCH, Melissa remarks that the ceiling looks like cabbage. I'm not seeing it. The whole structure is a modern fantasy, the exterior resembling a grouping of random objects clustered together. The interior is all beige and brown curves, with a gigantic pipe organ that looks like an lumber accident waiting to happen at the Home Depot, or a handful of giant pick-up sticks that had been frozen in mid-drop. Or enormous french fries. The ceiling does not resemble cabbage. 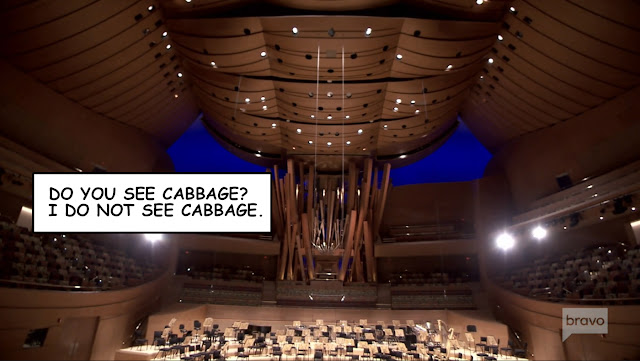 Just before the cheftestants head to Whole Foods to spend their $700 per pair, there's a commercial for Perdue Chicken in which Jim Perdue, via cell phone selfie video, thanks everyone from farmers to shelf stockers. “Folks who are rarely seen, even more rarely thanked, yet they’re always there when we need them the most." Yeah, this is probably all the shelf stockers, cashiers, etc., who are helping us purchase food during this time, will be getting. Lord knows there won't be a raise in their futures, not for merely putting their lives on the line.

The chefs go wild at the grocery store. Lee Anne snatches all of the endive before Eric can get his hot hands on them. Unperturbed, Bryan says something about having plans B and C, so substituting ingredients is no biggie. Malarkey, however, isn't as calm as his namesake. Shopping with him is like shopping "with a monkey on crack," according to Chef Wong.

Nini and Karen put their hands all over some fish. 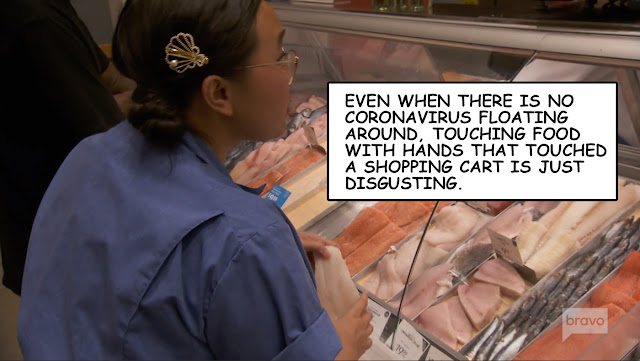 One of the elements of Bryan's and Eric's dish is a peanut-based sauce called maafe that they plan to use to "lacquer" their pork loin. Bryan opines that the sauce sounds like something "I want to lacquer all over me." Me too, Bryan. All over you, that is. 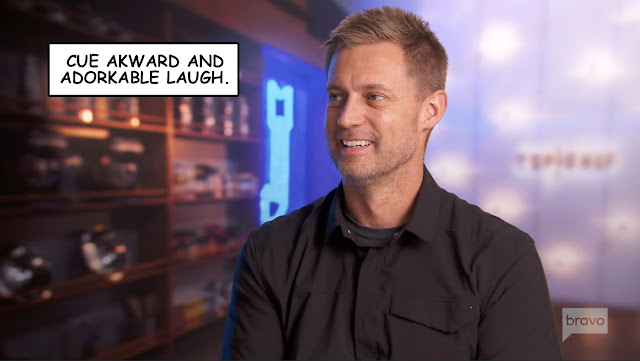 Once at Otium, chefs scramble for places on which to set up. Cooking goes fairly quickly before Gregory and Stephanie present their first dish, a sour/salty melange of sea bass glazed with miso, mirin, and sake, with sauteed celeriac, pickled apples, bacon, and yuzu. The judges love it, saying every element is both salty and sour. Kevin and Melissa then bring out their sweet and salty roasted ceiling...I mean...cabbage, with fish sauce caramel, apple, and cured pork crumble. It is a simple dish that brings a "bang of flavor" to Padma's mouth. Sparring partners Lee Anne and Malarkey, who battled over every ingredient that made their plate, please the judges with their umami/bitter combo of beef with miso anchovy hollandaise, bitter greens, charred orange puree, and a mimolette crisp. the dish is pretty but neither overwrought nor over-thought, which is typical of both chefs. Bryan and Eric then present their sweet/bitter dish of pork with maafe lacquer and bitter greens. Gail says the dish is subtle and focused, but could use more sweetness. Tom says the way the pork was sliced threw off the ratio of meat (too much) to lacquer (not enough). Finally, Karen and Nini serve the judges a umami/sour dish of tomato broth with poached cod and pickled cucumbers. It's not a particularly attractive dish, though Tom thinks it's beautiful. He says it reads sweet and sour, not sweet and umami. He then says the tomatoes should have been roasted rather than compressed and served raw. That tomato umami needs to be brought out via cooking.

Despite quibbles here and there, the judges admit that the whole meal was pretty amazeballs and that it would be difficult to eliminate anyone, much less two chefs. They'd be going home for making fantastic food. But rather than pulling a Project Runway and deciding not to kick anyone off, they make a decision and go with it. Kevin and Melissa's cabbage dish is declared the winner. Gregory and Stephanie and Lee Anne and Malarkey are declared safe, leaving Bryan/Eric and Nini/Karen on the bottom. 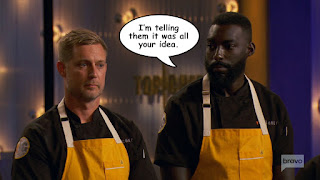 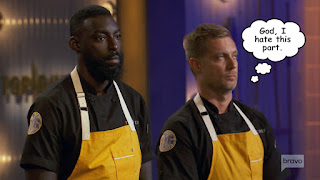 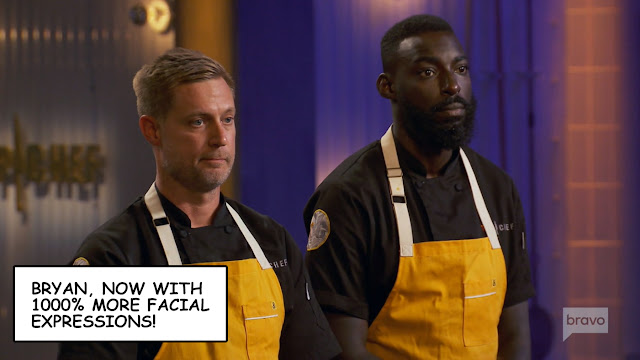 Poor Bryan must be getting a real complex this season (the hardest ever, he says) being on the bottom all the time. He should take comfort, well, a tiny bit anyway, that his dishes were all really delicious. He just might not have followed directions to the letter.

In the end, the judges determine that Nini and Karen missed the mark with their raw tomato, and they are sent directly into Last Chance Kitchen. Karen is too tired for this shit. She has to battle Nini. The winner then goes after Lisa, who beat Jenn in last week's episode.

* Any products in this post that are mentioned by name may have been provided to Minxeats by the manufacturer. However, all opinions belong to Minxeats. Amazon links earn me $! Please buy!