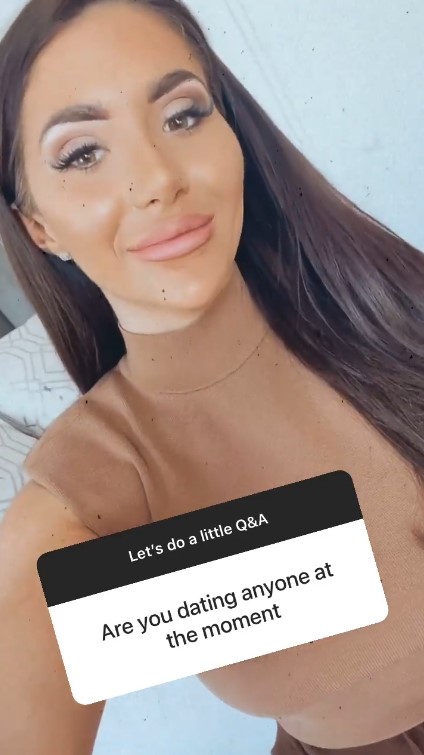 TOWIE star Chloe Brockett has hinted her relationship with Jack Fincham is back ON after sharing flowers “sent by him.”

Jack and Chloe were first connected in 2019 shortly after Jack split from his fellow Love Island winner girlfriend Dani Dyer.

Chloe, 20, drove her fans wild when she posted a shot of some flowers believed to be from Love Island winner Jack.

It all kicked off when a fan asked Chloe if she was dating anyone during an Instagram Q&A.

The Towie star confirmed that she was off the market.

She confessed she was back dating again[/caption]

She then went on to share a snap of some stunning flowers from Jack Fincham hinting that their relationship is back on.

She captioned it “Thank you Jack Fincham” with love hearts emojis.

The duo were first linked shortly after Jack split from Dani.

The Sun revealed at the time how Jack and Chloe had been exchanging messages, before eventually organising a date.

However, Jack called it off as he felt it was too soon after his break up.

A source said at the time: “He slid into her DMs and asked her out. She’s really excited about it and has been telling people.

“Unfortunately Jack soon got cold feet as he felt it was too soon after Dani and called off the date. But that’s not to say they never will go on a date.”

Chloe later moved on with Ex On The Beach star Stephen Bear.

Most read in Reality

What was the row between Piers Morgan and Dr Shola Mos-Shogbamimu?

Here's how you can watch Louis Theroux: Shooting Joe Exotic on BBC 2

However, in December Chloe and Jack were connected again after they shared pictures from the same hot tub.

The shots, posted hours apart on Christmas Eve, appeared to be from the exact same hot tub – leading to fans making the connection.

They also left flirty messages in the comments underneath.

However, the rumoured romance was short-lived, as the pair ended up unfollowing each other on Instagram shortly after.