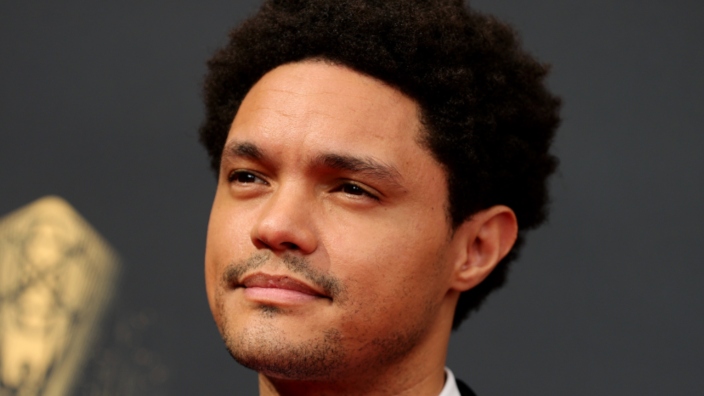 “The Daily Show” host took a funny approach to acknowledge the Jan. 6 attempted coup by “honoring” the ex-president and his pals.

Most Americans marked the one-year anniversary of the Jan. 6 insurrection in the U.S. Capitol Building with solemn reflection.

TMZ is sharing photos of the installation in New York City’s Flatiron District, which was unveiled on Thursday.

According to TMZ, each monument highlights specific ways each person contributed to the events of that “fateful day.” On the former commander-in-chief’s, it begins, “No hero played a bigger part in the Freedomsurrection than President Trump himself.”

Boebert’s monument recognizes that the Colorado representative sent tweets about the location of Speaker of the House Nancy Pelosi and other distinguishing information during the events of the day. “Did she tweet to help the Freedomsurrectionists locate targets?” it reads. “Or was she just bored during the siege and looking for a way to pass the time?”

Noah refers to Carlson as “a leader of the Rapid Revisionists,” who argued the Capitol insurrection was “both a nonviolent expression of patriotism and also a false flag operation conducted by liberals.”

For Giuliani, he noted that the former NYC mayor encouraged the audience at the “Stop the Steal” rally to prepare for “trial by combat” and recognizes that his law license has since been suspended.

For Hawley, Noah wrote that there was no stronger image, other than the gallows outside of the Capitol Building, than the image of the Missouri senator with his fist raised in solidarity toward crowds who later stormed the Capitol: “While his grateful fans never did take back the White House for Donald Trump, they did donate a lot of campaign money to Hawley.”

His powerful installation was only on display for one day: Thursday, Jan. 6, 2022.

Have you subscribed to the Grio podcasts “Dear Culture” or “Acting Up?” Download our newest episodes now!
TheGrio is now on Apple TV, Amazon Fire and Roku. Download theGrio today!