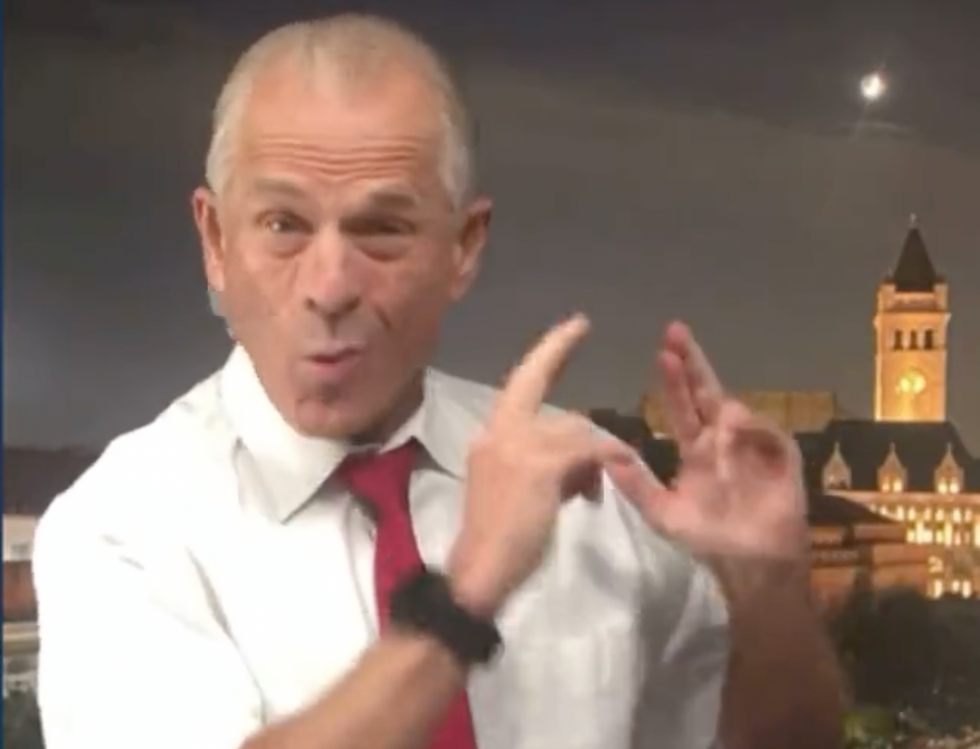 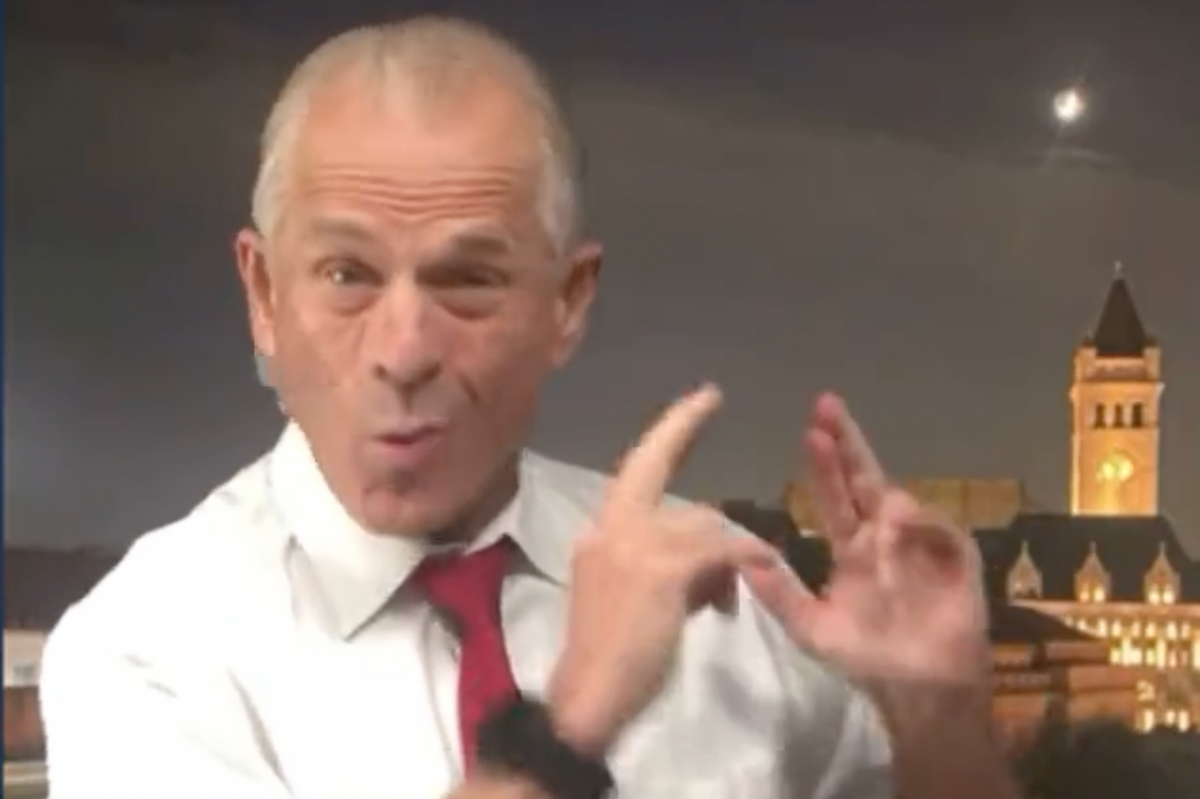 It's a year later, and Peter Navarro will not stop telling the world how much he really wanted to do COUP. But not like a low rent coup, with a bunch of dirty people pissing in Nancy Pelosi's office. Ugh, those guys give clean-cut insurrectionists like Peter Navarro and his good buddy Ron Vara a bad name. What Trump's favorite econ crank had in mind was a classy coup, covered by all the networks, where democracy is overthrown in style.

That's why he and Steve Bannon named it "The Green Bay Sweep," so people would know it was high-class. And in case there was any doubt as to who was in on this, that blabbermouth bragged to Rolling Stone that Bannon was "the guy who was coordinating the whipping of the votes."

Here he is on Tuesday explaining to Ari Melber that they would have gotten away with it if it weren't for those meddlesome rioters.

"All this required was peace and calm on Capitol Hill," Navarro gabbled, assuring the MSNBC host that violence was the furthest thing from his mind. "And at 1 p.m., Ted Cruz, Senator Ted Cruz, and Gosar, a representative, started the Green Bay Sweep beautifully, challenging the results of Arizona. Here's the most important thing I can tell you about this. The thing that we were trying to deal with was a media which refused to acknowledge any kind of possible fraud or irregularities."

"You just described this plan as a way to take an election where the outcome was established by independent secretaries of state, by the voters of those states, and legal remedies had been exhausted, with the Supreme Court never even taking, let alone siding with, any of the claims that you just referred to. So legally they went nowhere," Melber countered. "And then you will use the incumbent, losing party's power — that was the Republican Party that was losing power — to overtake and reverse that outcome. Do you realize that you are describing a coup?"

Unsurprisingly, Navarro did not regard his coup as a coup. Because, umm, George Soros?

He then went on to complain about that Never Trumper Mike Pence, who refused to listen to Navarro's very good plan to simply reject swing state electors and let the House of Representatives decide what Americans really meant when they cast eight million more ballots for Biden than for Trump.

Navarro has been whining about this all over town, telling Rolling Stone that he'd complained to Trump that "Mike wouldn’t return my calls."

"Why wouldn't he listen to you, you think?" Melber asked.

Navarro blamed Pence's chief of staff Marc Short, "a Koch network conservative, meaning that he's a Never Trumper," for walling off Pence. Also Pence betrayed Trump by not going along with his very good legal analysis showing that the vice president had the unilateral authority to reject electors.

"Don't you think somebody would have thought of this if the incumbent administration through the president or the vice president could just cancel the election outcome?" asked an incredulous Melber.

"We have an entire system designed to thwart, and I want to say this respectfully, but it's the truth, people like you," he went on. "To stop people like you who think that you can anoint yourself reviewers of the voters, of the American people, of what they lawfully did, that you trump the Supreme Court, no pun intended. People like you are what the Constitution is designed to stop. And it worked."

Ouch! No wonder Navarro ran straight into his pal Steve's waiting arms to lick his wounds.

Bannon on Navarro's interview with Ari Melber: We're not reasonable men. We're unreasonable. ... This is not some debatepic.twitter.com/u2c60QCEpj
— Madeline Peltz (@Madeline Peltz) 1641399439

"Ari Melber's a trial lawyer," a particularly rumpled Bannon assured Navarro. By which we assume he meant "Jew."

"Every time he makes a statement, you gotta get up in his face and refute it. You're trying to give Harvard faculty lounge pivot and reasonable men can disagree — no, we're not reasonable men," he said, warming to the pep talk.

Then they pivoted to whining about Trump canceling his press conference today, because "There are still too many people around Donald John Trump that are not Trumpers." Which just makes too much sense, if you think about it.

Navarro finished the day in style, with the softest of soft interviews. And perhaps a tumbler of Scotch?

This is odd. I\u2019ve watched hundreds of Peter Navarro interviews. But tonight on Diamond and Silk he seems to be completely changing the way he normally talks. What is happening here?pic.twitter.com/uwphnFNOpm
— Ron Filipkowski (@Ron Filipkowski) 1641442385

Yes, he does seem ... mellower than usual. Well, it's the confidence that comes with being an unreasonable man about to change history. Next time, Melber, Peter Navarro will really give you the business!

Click the widget to keep your Wonkette ad-free and feisty. And if you're ordering from Amazon, use this link, because reasons.