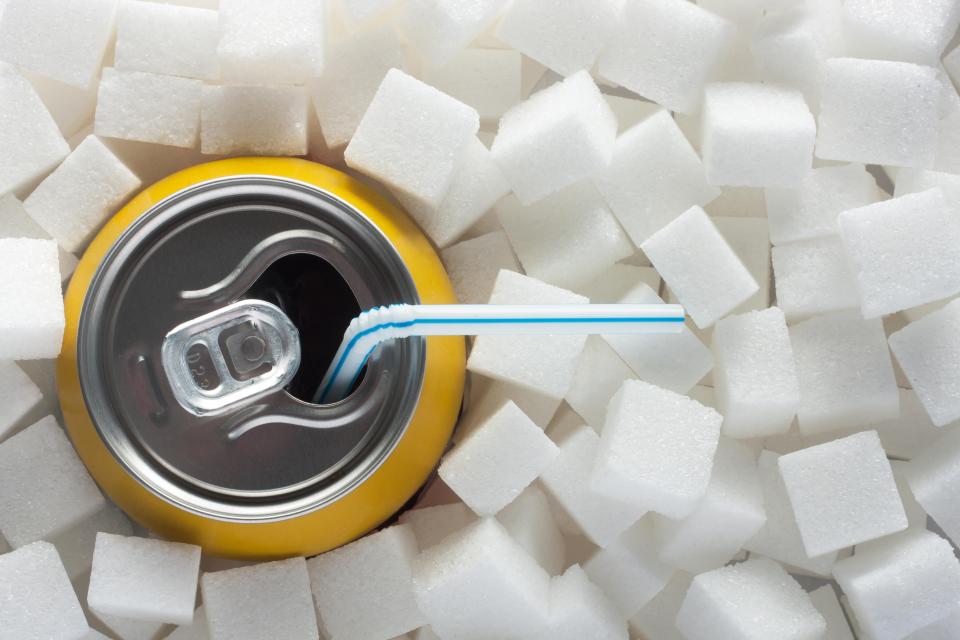 TWO sugary drinks a day doubles the odds a woman will be diagnosed with bowel cancer before 50, docs on a major study have warned.

But replacing pop with diet drinks, coffee or milk could actually lower the risk of the killer disease.

Women who drank two or more servings of sugary drinks a day had a 2.2-fold higher risk of bowel cancer, a study found[/caption]

A team of researchers from the US examined data from the Nurses Health Study – a study tracking the health of nurses and various lifestyle factors over time.

More than 95,000 women reported how many sugary drinks they consumed every four years.

Around 41,000 of these women also had data of their sugary drink consumption during their teen years.

During the follow-up period, an average of 12 years per woman, there were 109 cases of early-onset bowel cancer (under the age of 50).

The study concluded women who drank more than two sugary drinks each day had a 2.2-fold higher risk of early bowel cancer.

Findings, published in the journal Gut today, said each half a pint serving per day carried a 16 per cent higher risk of the disease.

Replacing each serving per day of with an artificially sweetened drink – such as diet soda – coffee, reduced fat milk or whole milk, was linked to a 17 per cent to 36 per cent lower risk of bowel cancer.

“Sugar-sweetened beverage consumption may contribute to the rising incidence of early onset colorectal cancer,” the team wrote in their paper.

Bowel cancer risk increases drastically from the age of 50. But it can be diagnosed at any age, albeit rarely.

Of the 42,000 cases diagnosed every year, over 2,500 are in people under the age of 50, according to Bowel Cancer UK – the equivalent of nearly seven a day.

The problem is rising, doctors have warned, with more younger people being diagnosed than ever before.

The Sun’s No Time 2 Lose campaign has campaigned for the bowel cancer screening age to be lowered to 50 so that more lives are saved.

However, since Matt Hancock agreed to lower the age in England in 2018, screening tests still haven’t been rolled out to those aged 50 to 60.

What are the symptoms of bowel cancer?

There are several possible causes of bleeding from your bottom, of blood in your poo.

Bright red blood could come from swollen blood vessels, haemorrhoids or piles, in your back passage.

Dark red or black blood could come from your bowel or stomach.

Blood in your stools is one of the key signs of bowel cancer, so it’s important to mention it to your doctor so they can investigate.

It’s important to tell your GP if you have noticed any changes in your bowel habits, that lasts three weeks or longer.

It’s especially important if you have also noticed signs of blood in your poo.

You might notice you need to go to the loo more often, you might have looser stools or feel like you’re not going enough or fully emptying your bowels.

Don’t be embarrassed, your GP will have heard a lot worse! Speak up and get it checked.

This is less common than the other symptoms, but an important one to be aware of. If you’ve lost weight and don’t really know why, it’s worth mentioning to your GP.

You may not feel like eating, feel sick, bloated and not hungry.

Bowel cancer that causes bleeding can cause a lack of iron in the body – anaemia.
If you develop anaemia you’re likely to feel tired and your skin might look pale.

As with lots of other forms of cancer, a lump or pain can be a sign of bowel cancer.

It’s most likely you’ll notice a pain or lump in your stomach or back passage.

See your GP if it doesn’t go away, or if it affects how you eat or sleep

Although today’s study sheds light on what may cause bowel cancer in young people, it is not definitive.

Prof Kevin McConway, who was not involved in the research, said there are a number of reasons the women may have gotten bowel cancer.

The emeritus professor of applied statistics at The Open University said: “The women who drank the largest amounts of sugary drinks tended to smoke more (if they smoked), to be less active physically, to drink less alcohol, to eat more meat, and to eat less fibre, than women who drank the smallest amounts.

“It’s possible that these other differences are, at least in part, the cause of the differences in early onset bowel cancer risk, rather than the sugary drink consumption.”

Although the researchers attempted to control for these factors, it’s not possible to completely eliminate their influence.

Known risk factors for bowel cancer include eating a lot of red meat or junk food, smoking and family history.

Dr Adam Jacobs, Director of Biostatistics, Premier Research, said that of the 109 cases of bowel cancer, only 16 of the women drank two or more fizzy drinks per day.

“I think it is not sensible to try to draw firm conclusions from just 16 events”, he said.

Dr Carmen Piernas, University Research Lecturer and nutrition scientist, University of Oxford, said that while the findings were “preliminary”, there is already strong evidence against drinking too many sugary drinks.

“Everyone should aim to minimise their consumption – this analysis does not change that advice.”

May 7: You’re super-confident in love and earned the right to say how you feel

WE AD IT ALL

Charles 'excluding Meghan from Archie's birthday message could be deliberate'

The NHS says adults should not consume more than 30g of “free sugars” per day, which does not include fruit or milk.

This is roughly the same as seven sugar cubes or a can of coke.