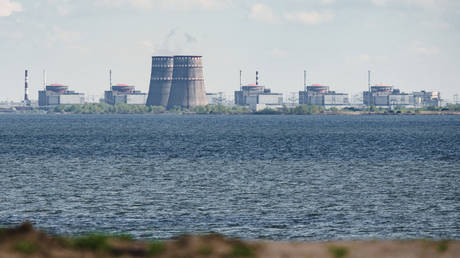 Kiev’s forces have shelled the nuclear plant’s resort house where the delegation could stay, a local council member has said

Ukrainian forces are shelling a potential route of the International Atomic Energy Agency (IAEA) mission, which is set to examine the Zaporozhye Nuclear Power Plant this week, local authorities claimed on Tuesday.

Zaporozhye Region council member Vladimir Rogov told RIA Novosti that “Ukrainian nationalists are targeting locations that could be visited by the IAEA mission in Energodar,” where the plant is located. He added that “[Ukrainian President Vladimir] Zelensky’s regime also started a military operation in the south of the country,” which raises concerns for the safety of the IAEA mission.

On Monday, IAEA chief Rafael Grossi announced that an expert group would visit the NPP this week to assess the damage sustained by the plant and check the safety and security systems. Zaporozhye Nuclear Power Plant has been under Russian control since March.

Moscow has repeatedly accused Ukrainian forces of attacking the plant, while warning that the shelling could trigger a disaster that would eclipse the Chernobyl incident. Kiev insists, however, that Russian forces are shelling the site while stationing military hardware there.

On Sunday night, Ukrainian forces shelled Energodar, the city where the plant is located, local officials said. They claimed that the attack, which injured nine people and deliberately hit a number of residential houses, was meant to torpedo the upcoming IAEA mission. “This provocation by Kiev-controlled militants is aimed at derailing the visit of the IAEA chief to the Zaporozhye NPP,” they said at the time.

Also on Monday, the Russian Defense Ministry claimed that Kiev’s forces attempted a counter-offensive in Kherson in southern Ukraine, but “failed miserably.” The ministry went on to say that the Ukrainian army had attempted to attack in three directions, but made no gains and suffered “great losses,” which included dozens of tanks and armored fighting vehicles.