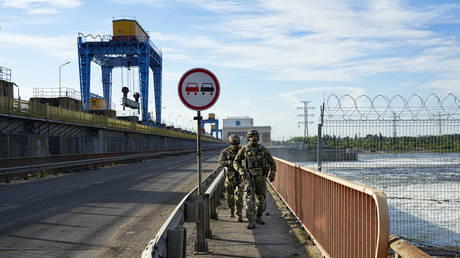 Residents of Novaya Kakhovka are left without basic necessities, the local administration has said

“We’re likely in for some gruesome consequences,” the Kakhovka district’s head Vladimir Leontyev told reporters. “Responding to the scene is currently impossible. There were a lot of strikes, something exploded.”

According to Leontyev, there were hits reported both within the city limits and at the nearby hydroelectric power plant. While the exact extent of the damage had not been established yet, the attack has crippled the city’s water and power supply.

“The fires are still burning and we are still hearing explosions,” Leontyev said around 10:45pm local time. The city’s hospitals had all been issued emergency generators and the authorities plan to start water deliveries in the morning, he added.

Novaya Kakhovka had been on the receiving end of Ukrainian shelling all day. Earlier, Leontyev told the media that about ten salvos, each including at least six rockets, damaged many civilian structures, including a market. The official said Ukrainian forces were using US-supplied HIMARS systems to harass the city.

Kiev claimed on Monday to have launched a counter-offensive in the Kherson Region, where Novaya Kakhovka is located. Natalia Humeniuk, Ukraine’s southern command spokeswoman, told state media that Kiev’s troops had breached the “first line of defense” of the Russian forces, but declined to give any details of the operation.

By Monday evening, however, the Russian Defense Ministry said the Kherson offensive had “failed miserably,” with Ukrainian forces routed after suffering heavy losses. According to the ministry’s report, Kiev lost over 560 troops, dozens of armored vehicles and tanks, and two Su-25 ground-attack planes.