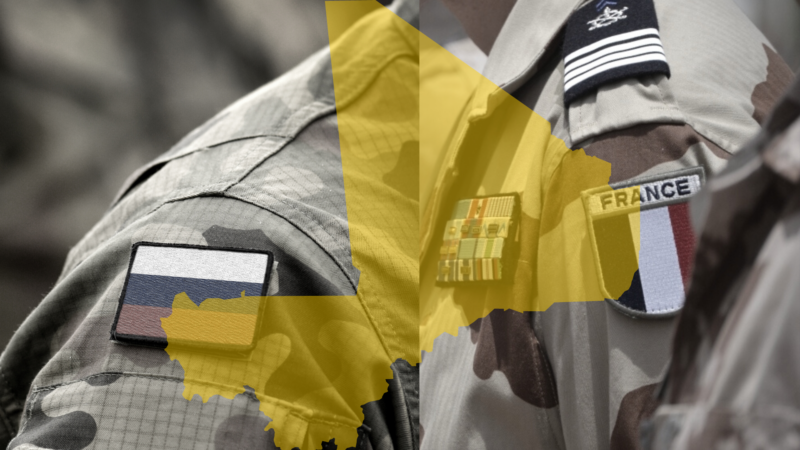 Undertones: Is there a perversion of decolonial narratives in Mali?

This story is part of Undertones, Global Voices’ Civic Media Observatory's newsletter. Find out more about our mission, methodology, and publicly available data. Subscribe to Undertones.

Mali is going through an information warfare that puts anticolonialist narratives at the forefront. The country’s military junta — which deposed the increasingly unpopular president Ibrahim Boubacar Keïta in 2020 — blames all of Mali’s woes on its former colonial power, France. In the meantime, Russian mercenaries have gained power in the country’s narratives and territory.

Mali’s colonial history is just a couple of generations away. In 1960, Mali gained independence from France, which had seized control over the region in the late 19th century during Europe’s “Scramble for Africa.” In earlier centuries, Mali had been part of three large wealthy West African empires that controlled the trans-Saharan trade in gold, salt, and other commodities. Today, Mali is one of Africa’s top gold producers.

France put boots on the ground in 2013 at the request of the capital, Bamako, as Mali went through a wave of political instability and terrorist threats. Northern Mali had been struggling with different rebel groups for years. Soon after their arrival, French soldiers managed to retake three captured cities from Islamist extremists, and in February 2013, French President François Hollande traveled to Mali, where he was welcomed as a hero.

Although France’s motivation to protect its mining and nuclear interests in the region cannot be ruled out, for many observers, the French military did indeed help regain territories from rebel groups, albeit total victory did not happen. Today, many Malian children bear the name François after former French president François Hollande, according to some sources.

However, the interim military government claims that France has been colluding with rebel groups, which has led to their expansion. Politicians, journalists, and activists with differing opinions risk bodily harm. Mali dropped by 12 spots on Reporters without Borders’ Press Freedom index from 2021 to 2022. Due to the junta hardening its position, “the pressures for a ‘patriotic treatment’ of information are multiplying,” RSF says. Several journalists have gone missing and are “sick with fear.” It is difficult to pinpoint the multiple forces behind the intimidation tactics.

The military junta refused to call elections in early 2021 and declared a five-year transition, thereby butting heads with the Economic Community of West African States (ECOWAS), which implemented an economic embargo on Mali. France does not recognize the junta and some Malians have protested against French military presence, especially in Bamako. In February 2022, French troops were asked to leave the country amidst strong anti-colonial narratives. In May, Malian authorities broke defense ties with France. In rural northern areas where the state is less present, such as in Ménaka, people fear that the French departure would leave a power vacuum for the jihadists.

For our Malian researchers, the military’s government’s emphasis on France’s presence and not on the country’s crumbling democracy “is a perversion of the decolonial discourse.”

On Facebook, and before tens of thousands of followers, activist Kemi Seba gave his support to the Malian authorities in their decision to expel the French ambassador Joël Meyer, claiming that he is “an imperialist, a negrophobe and a terrorist supporter.” He calls on the other African countries to follow Mali’s example. For our researchers, this video ranked “-1” on the Observatory’s scorecard of civic impact, as it is a reflection of a broad sentiment in the population, but also defames France’s ambassador. Seba has close ties with Malian and Russian authorities. Seba publicly met with the junta’s leader Colonel Assimi Goïta last May and traveled to Moscow to meet Russian authorities soon after the war against Ukraine broke out. Full analysis here. 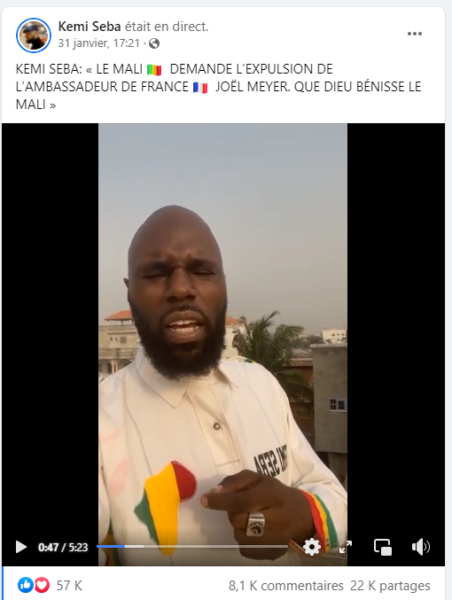 ASKS FOR THE EXPULSION OF FRENCH

Again on Facebook, the pro-junta page “Farafina Authorite Krymo” shared the unverified news that the Malian military arrested one of the most important Jihadist leaders, Amadou Koufa. His arrest, or death, has been misreported before, as is common with jihadist leaders. The post misinforms to promote the military regime, whose popularity depends on their wins against terrorist and separatist groups. Full analysis here. 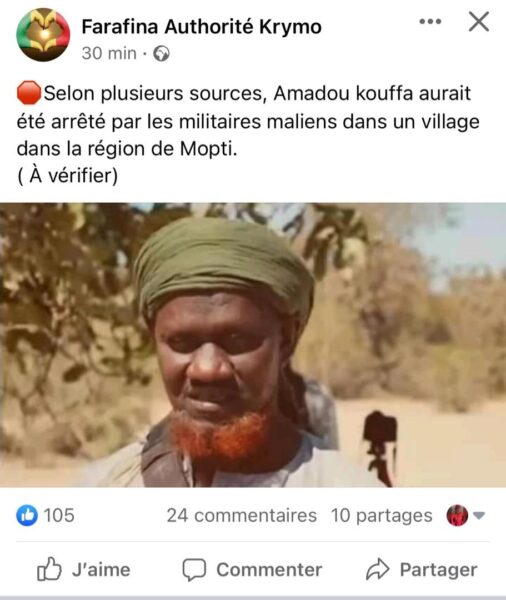 According to multiple sources, Amadou kouffa [sic.] would have been arrested by Malian soldiers in a village in Mopti region. (To be verified)

On Twitter, a self-described former Malian soldier accused the French military of killing civilians and burying them in mass graves before leaving their camp in Gossi, along with graphic images. More than a hundred people commented on the tweet, with many accusing Russia’s mercenary “Wagner group” of staging the massacre. Since then, the account has been deleted. This item was ranked -3, the lowest score on the Observatory, for spreading high-stakes disinformation to a wide audience. Full analysis here.

The Wagner Group is, according to different definitions, an un-recognized Russian private group of mercenaries, private security agents, or paramilitary men linked to the Russian authorities, having gained international prominence in Ukraine in 2014. In Africa, their operations involve Libya, Central Africa, and Mali, where these Russian soldiers allegedly train the Malian military and thereby spread Russia’s influence in the region. The Wagner Group has been allegedly involved in numerous human rights abuses, notably the recent massacre in Moura, a village in central Mali. Russia’s increasing influence in the region has contributed to deteriorate further France’s relationship with Mali.

The day after the infamous tweet accusing France for the massacre in Gossi, the French military responded by sharing surveillance images from the Gossi base. A France24 journalist shared the pictures that allegedly show Russian mercenaries burying bodies. The subtext is that the Wagner men killed people — probably civilians — and are trying to blame the French army. Most commenters claim that France released false images. Full analysis here. 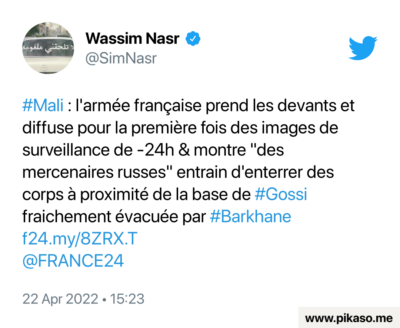 #Mali: French army goes ahead and streams for the first time surveillance images recorded less than 24 hours ago showing “Russian mercenaries” burrying bodies near the #Gossi based recently evacuated by #Barkhane f24.my/8ZRX.T @FRANCE24

Amid this backdrop of competing narratives, some dissenting voices criticize Mali’s military junta. In particular, popular religious leaders have a large responsibility in weighing on public opinion.

In March 2022, Imam Mahmoud Dicko harshly criticized the junta — without calling them by name — stating that he has “decided to come out of his silence, because the country is run by traitors and dishonest people.” Imam Dicko had, in the past, weighed against democratic regimes that have later fallen.

The video of Imam Dicko was shared by Diawoye Diaby, a Malian who publishes videos and information from other media. It garnered more than 1 million views and more than 4000 comments. In our scorecard, this item ranked +1 because it contributes to improving freedom of expression and spaces of debate. Full analysis here. 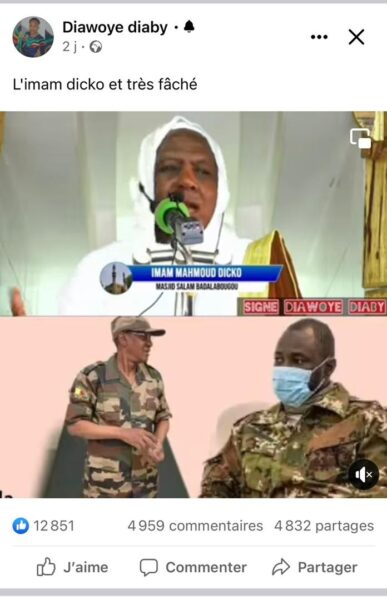 Undertones: Is there a perversion of decolonial narratives in Mali?