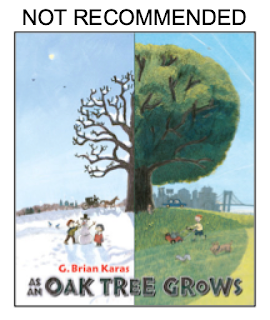 In October of 2014, AICL reviewed the opening pages of As An Oak Tree Grows by G. Brian Karas.
Last week, a reader wrote to tell me that she had received a copy of the book, via Dolly Parton's Imagination Library. It appears that Karas and his editors at Nancy Paulsen Books (an imprint of Penguin Young Readers) decided to make a change to the original edition.
Here's a description of the book (from the publisher's website):

This inventive picture book relays the events of two hundred years from the unique perspective of a magnificent oak tree, showing how much the world can transform from a single vantage point. From 1775 to the present day, this fascinating framing device lets readers watch as human and animal populations shift and the landscape transitions from country to city. Methods of transportation, communication and energy use progress rapidly while other things hardly seem to change at all.

This engaging, eye-opening window into history is perfect for budding historians and nature enthusiasts alike, and the time-lapse quality of the detail-packed illustrations will draw readers in as they pore over each spread to spot the changes that come with each new era. A fact-filled poster is included to add to the fun.

Due to the content, I do not recommend the book. Here's the original cover:

My 2014 post about the book did not say anything about the cover, but I want to say a little about it, today. Too often, children's books and textbooks about the continent of North America (and the country currently known as the United States) start with European arrival, as if the continent was empty of people, before then. That is the choice made for the cover of As An Oak Tree Grows. On the left half of the cover we see colonial-time imagery and on the right we see present day. But inside, the book double-paged spread starts with Native people. Their tribal nation is not specified, which is a problem. The second one has the same people. But on the third page, they're gone. In the original, the text on that page read:

The boy grew up and moved away. Farmers now lived here.

The copy in the Imagination Library is different. On that page, the text is:

The boy no longer lived here. New people came and made their homes around the oak tree.

For your reference, here's screen caps for the two pages:

So--the question is: does the change to the Imagination Library edition make it better?
In the original edition, that page and the ones before it show just that boy and an adult. They don't seem to be part of a community. They don't seem to live in a village. And, they aren't identified at all as people. All we're given is "the boy" (specifically, "a young boy planted an acorn" and then "the boy grew up and moved away").
In that original edition, it sounds like the boy grew up and decided to move. What's missing is what was happening to him, his people, and his tribal nation. The second sentence says that "Farmers now lived here." The unsaid part is "white" farmers. Native peoples had already been farming for a very long time. Why wasn't "farmer" used to describe them? Far too many materials tell kids that Native people were primitive, roaming around, hunting and gathering -- but they were farming, too!
Looking at the Imagination Library website, I see that the book is listed on Feb 28, 2018. The cover there shows the Imagination Library seal on the cover. Here's an enlarged image of it: 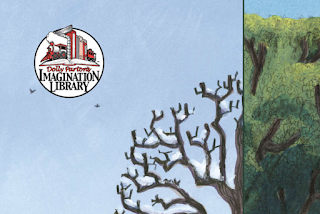