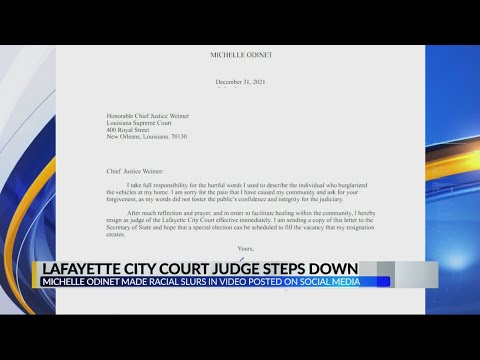 We’re leaving a lot of things behind in 2021 and, fortunately, that includes the bench for Louisiana Judge Michelle Odinet. The Louisianan initially refused to step down despite widespread outrage at Odinet and her family’s disgustingly casual and comfortable use of the N-word in a home video that went viral. She blamed sedatives for repeatedly using and laughing at racial slurs with her family while reviewing footage of a burglar caught on a security camera.

After a video went viral showing racial slurs being used in the home of Louisiana Judge Michelle Odinet, she was placed on leave while an investigation takes place. To replace her, the Louisiana Supreme Court appointed Black Judge Vanessa Harris. https://t.co/4QLVgbmZ4l pic.twitter.com/GcRJhUd7tM

Just like clockwork, CNN reports she’s officially stepping down after she was suspended by the state supreme court. She’s also fully [finally] apologizing.

“I take full responsibility for the hurtful words used to describe the individual who burglarized the vehicles at my home. I am sorry for the pain that I have caused my community and ask for your forgiveness, as my words did not foster the public’s confidence and integrity for the judiciary,” Odinet wrote in a letter attorney Dane Ciolino submitted on her behalf to the Louisiana Supreme Court.

Ciolino told HuffPost that Odinet “understands that this is the end of her public service, but only the beginning of what she must to do to earn the forgiveness of the community.”

Now that Odinet has exhausted her White woman tears and not-so-gracefully bowing out of her job as a Lafayette City Court Judge, she still has to worry about more than earning forgiveness from the community. BOSSIP reported a couple of weeks ago that New Orleans District Attorney Jason Williams ordered a review of every case Odinet handled as a prosecutor. And what about her blatant bias tainting all the cases she presided over during her career on the bench? Based on that peek into Odinet’s home life, her judicial robes might as well have been hanging up next to klan robes.