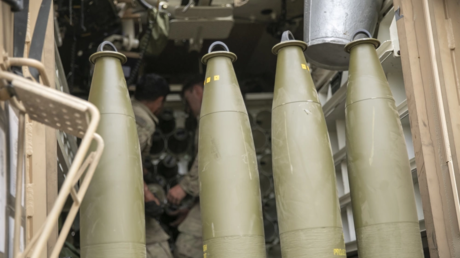 The US military is running low on some types of ammunition after the White House approved and delivered billions of dollars in “lethal aid” for Ukraine since February, several military officials told the Wall Street Journal on condition of anonymity.

In addition to thousands of guns, drones, missiles, artillery platforms and rocket launchers, Washington has supplied Kiev with large amounts of ammo, including up to 806,000 155mm howitzer rounds. The stocks of the latter munitions are running “uncomfortably low,” an unnamed Pentagon official told the Journal.

“It is not at the level we would like to go into combat,” the official added, though noted that since the US is not currently directly involved in any major conflict, the 155mm rounds have not yet reached “critical” levels.

The drawdown on supplies has prompted the Army to carry out an “ammunitions industrial base deep dive,” in which it will determine how to maintain its own supplies while keeping up the current pace of aid to Ukrainian forces. The United States has devoted nearly $14 billion in direct weaponry supplies to Kiev this year alone.

The military has also called on lawmakers to authorize $500 million in upgrades for Army ammunition plants, though the WSJ reports shortages are not due to a lack of funding, as US President Joe Biden’s latest budget request of $773 billion is likely to cover replenishment costs.

According to an industry official reached by the Journal, it can take suppliers up to 18 months to manufacture new ammunition from the time orders are placed, while more sophisticated weapons, such as missiles, are likely to take much longer. While the Army and other branches continue to fulfill existing contracts with ammunition producers, they have not signed deals to account for the growing scarcities.

Since Washington intensified its arms deliveries to Kiev in February, some suppliers say the Pentagon is simply not communicating the needs of the military, which has created “delays” and left contractors “unable to prepare for more production,” the outlet reported.