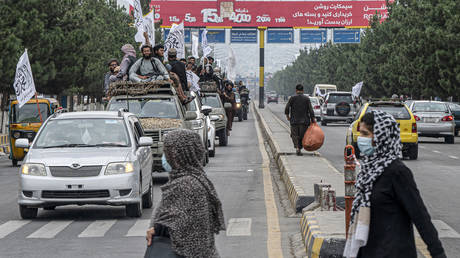 US must ‘pay the bill’ for Afghanistan – Russia

Washington should not deflect responsibility for its own mistakes, Moscow’s top UN diplomat says

The US should focus on compensating the Afghan people for the 20 years of “pointless occupation” rather than accusing others of not chipping in, Russia’s envoy to the UN, Vassily Nebenzia, has said.

The US sent troops into Afghanistan in 2001 to fight the Taliban, Al-Qaeda, and other Islamist groups as part of its global War on Terror declared after the 9/11 terrorist attacks in America. The Taliban, however, seized Kabul and overran Afghanistan last year during the final stage of the withdrawal of the US and other Western forces.

At a UN Security Council meeting in New York on Monday, US envoy Linda Thomas-Greenfield suggested that Russia was not doing enough to help Afghanistan’s economy.

“Russia argued, as others have in the past, that Afghanistan’s problems are the fault of ‘the West,’ and not the Taliban. Really?” Thomas-Greenfield said.

“Here is my question: What are you doing to help other than rehash the past and criticize others? If you are concerned that Afghan women and children are dying, how are you helping them?”

The US envoy went on to say that Russia contributed “nothing” to the UN Afghanistan Humanitarian Response Plan this year, and called China’s contributions “similarly underwhelming.”

Nebenzia hit back at Thomas-Greenfield, arguing that Washington should bear the burden, given the nearly two decades of US troops in the war-torn country.

“The cynicism of such statements is simply shocking: We are being asked to pull out our wallet to rebuild the country whose economy was virtually destroyed by the 20 years of occupation by the US and NATO,” Nebenzia said.

“Instead of admitting one’s mistakes and trying to fix them, we are now being chastised for not wanting to pay for the bills of others. It’s an unusual proposition.”

“No, dear former Western partners, it is you who must pay for your mistakes,” he added.

We have helped and will continue to help Afghanistan, and we recommend that you focus on compensating… the Afghans for the 20 years of senseless occupation that destroyed Afghanistan and [threatened the survival of its people]

In response, Thomas-Greenfield said: “Let me just state that if the Russian Federation believes that there was an economy in Afghanistan to be destroyed, it’s been destroyed by the Taliban.”

Chinese Ambassador Zhang Jun said, “the fiasco of the past 20 years [in Afghanistan] has once again proved that military intervention and power politics are not the right way,” and “the tragedy in Afghanistan should never be allowed to repeat.”

The UN has warned that the current level of foreign aid to Afghanistan is not enough.
“You can’t use humanitarian relief to patch up what has been a completely collapsed economy,” Kanni Wignaraja, assistant secretary general and regional director of Asia-Pacific at the United Nations Development Program, said this month.

US must ‘pay the bill’ for Afghanistan – Russia