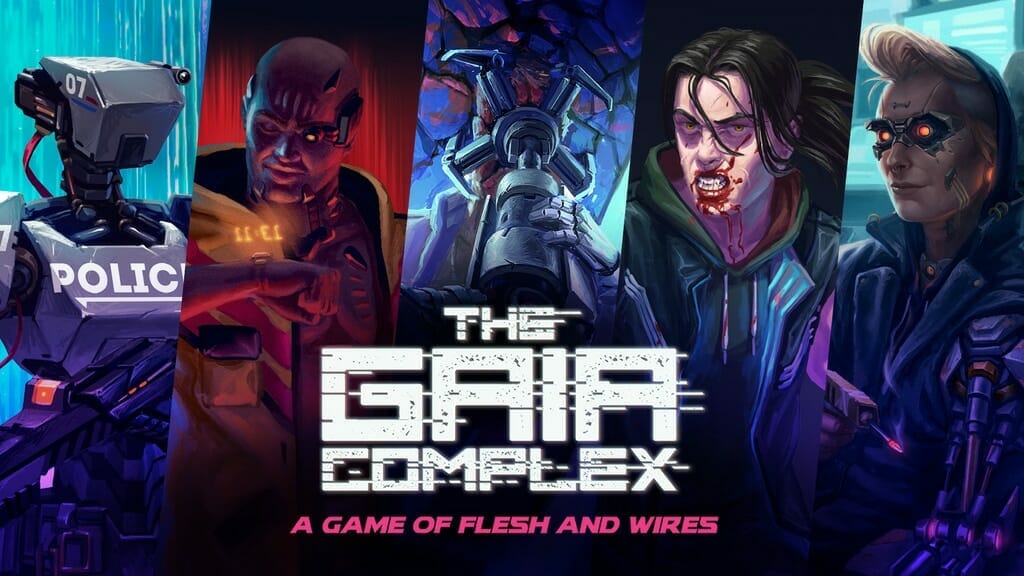 Flesh and wires: The Gaia Complex

Chris “Shep” Shepperson has a cyberpunk RPG of corporate violence, AI and vampires on Kickstarter. The tabletop game is set in 2119, and The Gaia Complex is on Kickstarter.

The campaign has three weeks left to run and is now fully funded, hitting that £5,000 target easily. You can see the latest total and join in at the pitch page.

In the TTRPG, player characters are Mercs hired to fight back against the system. The game’s vampires, of which there is no shortage, are not playable characters.

The Gaia Complex – Quick Start is available now. It’s a Pay What You Want download at DriveThruRPG, with a recommended price tag of $1, and has become a silver bestseller. It’s been available since April 2020 as this is the second attempt to fund The Gaia Complex.

The Gaia part of The Gaia Complex? That’s the AI which governs the city.

Towards the end of the 21st century, the third world war, which became known as the Resource War, pushed mankind to the brink of destruction and brought ruin to the Earth’s atmosphere. Small pockets of humanity survived this horrific conflict, eventually forming the eleven metropolises. Initially, these incredible urban constructs were able to grow and prosper through advancements in atmospheric processing and technological innovation, but now cut off from each other, the eleven metropolises must each face their own difficulties and hardships. The Gaia Complex focuses on the largest of these locations; New Europe, a single sprawling city that covers much of what we currently know as mainland Europe. New Europe is a world of street violence, corporate espionage, vampiric uprisings and an overzealous A.I., known as Gaia, which functions as the city’s governor and the protector of its citizens.

A pledge of £15 will get you The Gaia Complex PDF, and £35 brings you both the hardback and the PDF.

A limited-edition is available at £55, which also has an accompanying PDF and higher tiers are available.

Irrespective of which tier you back, the estimated delivery for the project is September 2021.

Flesh and wires: The Gaia Complex