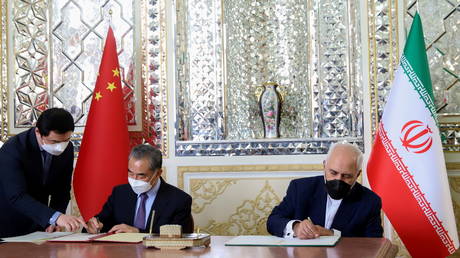 Alastair Crooke, a former British intelligence official and diplomat, spoke to RT’s ‘Going Underground’ about strategic competition involving the US and China and how Beijing has recently taken a huge step by enrolling Tehran in its plans.

Iran and China signed the 25-year strategic partnership agreement last month. Some of the deal’s terms were kept secret, but Iran will reportedly receive $400 billion to $600 billion in Chinese investments into infrastructure projects. This is part of Beijing’s ambitious plan to build a network of roads and pipelines across the continent to secure its future trade.

Chinese money “is going to fund a really big shift in the whole of the Middle East and greater Eurasia,” Crooke said. “It is about opening up the East-West trade route across the north of the Middle East directly into Europe. And the North-South route that passes through Iran and goes south and may bypass the Suez.”

Global trade has for decades relied on cheap maritime traffic to run smoothly. Naval nations like the UK in the past and the US now have a lot of leverage, particularly through the control of choke points, like the Suez Canal or the Strait of Hormuz. China as a land-centered nation seeks to secure the supply of crucial resources like energy and the export of manufactured goods through its Belt and Road initiative.

Iran, both as a major oil supplier and due to its geographic position, plays an important part in Chinese calculations. Taking the Chinese side will actually restore the historic role of Persia in Europe-Asia trade, Crooke argued.

“The last Silk roads had largely evaporated in the 1500s, but it was always Persian traders who were in command of those trade routes,” he said. “They are really crucial to China, crucial to Russia, not only in trade but also in security terms.”

Watch the entire episode to hear more about the rapidly escalating war of words between the US and China, how Russia and the EU fit into the new cold war, and other geopolitical issues.