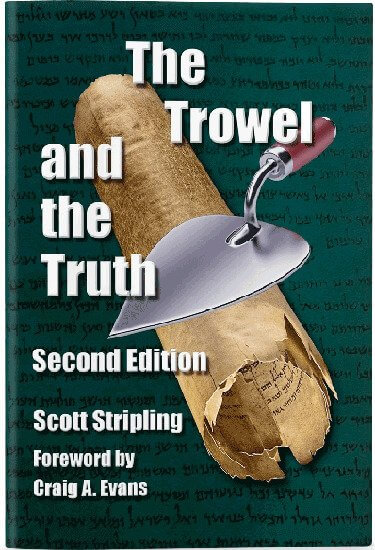 EDITOR’S NOTE: Patterns of Evidence explores a broad spectrum of viewpoints in order to better understand the issues involved in biblical archaeology. In line with this effort, we sometimes include Thinker posts from scholars in different “camps.” These camps often disagree on certain points of chronology, geography, and interpretation. Very few scholars agree with one another on every point of debate, and we find that we learn a great deal from listening to and examining the ideas of others who hold a variety of views.

SYNOPSIS: Dr. Scott Stripling shares his views on the anti-biblical bias among archaeologists today. These themes come from his book, The Trowel and the Truth, a layman-level guide to field archaeology that also gives an overview of convergences between the biblical text and the archeological data from the lands of the Bible.

“The one who states his case first seems right,
until the other comes and examines him.”

Archaeologists working in the southern Levant who view the Bible as a serious historical text are rare, but I am on a mission to change that. Biblical skepticism often grows out of flawed chronology or biased ideological paradigms.

Nadav Na’aman, a leading Israeli archaeologist, summarizes the majority view held by contemporary archaeologists, “…the narratives of the capture of Jericho and Ai and the conquest of the six cities of the Shephelah and hill country of Judah are devoid of historical reality.” (Nadav Na’aman, From Nomadism to Monarchy, 1994, 280).

This unambiguous statement leaves no doubt as to where many of my secular colleagues stand. They hold similar views on the historicity of the Exodus and much of the rest of the Bible.

The Double Standard Bias Against the Bible

Interestingly, texts from Egypt and Mesopotamia are scoured for help in reconstructing the history of the Ancient Near East while biblical narratives are viewed as ahistorical. Stated bluntly, an anti-biblical bias exists in much of the academic world. Biblical Archaeology Review publishes a high-quality magazine that explains in great detail why the Bible must be taken with a grain of salt.

A few years back I lectured at the University of Holy Land Studies at Hebrew University to a large class of students pursuing MAs or PhDs in Ancient Near Eastern Archaeology, also known as Biblical Archaeology. In 45 minutes, I laid out a series of synchronisms between the archaeological data and the biblical text. Afterward, many of the students stood in line to tell me how impressed they were that I had used the Bible as a serious historical text. I was the first one all year to do so. They were not opposed to it, nor had they been exposed to it.

There are no extra-biblical texts to illuminate the history and significance of Khirbet el-Maqatir, the likely site of biblical Ai, and Shiloh, Israel’s first capital. I have been fortunate to direct the excavations at these sites in Israel’s Central Hill Country. Only the Bible mentions them.

The Trowel and the Truth Seeks to Set the Record Straight

I wrote The Trowel and the Truth to provide a resource for archaeology students and interested laymen which would empower them with evidence-based research on the consistency between the archaeological data and the biblical text. In short, my goal was to set the record straight concerning supposed errors in the Bible.

After introducing biblical geography and chronology, I explore dozens of synchronisms which demonstrate the reliability of the Bible. I begin with geography and chronology because if we look in the wrong place or the wrong time, we are certain to find the wrong stuff. Such has been the case with the flawed 13th century B.C. exodus theory which is now the dominant view in academia. Biblical passages such as 1 Kings 6:1, Judges 11:26, and 1 Chronicles 6:33-37 establish the exodus and conquest in the 15th century B.C. and the archaeological evidence that I present confirms this date with a high degree of specificity.

“In the four hundred and eightieth year after the people of Israel came out of the land of Egypt, in the fourth year of Solomon’s reign over Israel, in the month of Ziv, which is the second month, he began to build the house of the LORD.”

The juxtaposition of 1 Kings 9:15 with the six-chambered gates at Gezer, Hazor, and Megiddo provides another significant synchronism. This text states that Solomon commissioned the fortification of these regional centers, along with Jerusalem. Due to topography, there are slight differences in the gates’ dimensions, but the designs are virtually identical. For over two decades Professor Israel Finkelstein, the current excavator of Megiddo, has attributed these gates to Ahab, a century after Solomon. However, last summer his team uncovered a floor that sealed against the gate. The pottery under this sealed locus points to Solomon, not Ahab. Professor Finkelstein has acknowledged this and his professional publication is pending in Tel Aviv journal.

Features of the Trowel and the Truth

The Trowel and the Truth empowers readers to engage in the critical arena of ideas with issues like those mentioned above and to better understand the authorial intent and the cultural background of the Bible. The stakes could not be any higher.

A helpful glossary enables the reader to understand the archaeological verbiage, and maps and illustrations illuminate the topics. This second edition incorporates the latest discoveries and proposals in Biblical Archaeology through 2017, including information on Khirbet el-Maqatir, the probable Ai of Joshua 7-8 and Ephraim of John 11:54, and Shiloh.

No reason exists to exclude the Bible in the process of historiography. It presents real people, real places, and real events. The Bible stands the test of time.

What Readers Are Saying

The Trowel and the Truth changed my biblical studies and sermon preparation in many ways. The two most significant are resources and chronology. I had been interested in Biblical Archaeology for many years, but I have had limited resources from which I could discover and use to illuminate the biblical text. This book was a turning point in what and how to find those kinds of resources. The second, and most significant is about biblical chronology. The simplest example was that I had been taught and had accepted a later date for the Israelite exodus and conquest of Canaan. That is actually too simplified. In fact, I had assumed that information was absolutely accepted and factual and even “biblical.” After all, it was presented as a matter of fact by most authors that discussed the topic. Accepting it as truth was assumed, and there was no other option. This book opened my eyes to the possibility that there are other options, and again, in fact – more biblical ones. I didn’t realize the later date chronology had inundated so much of Christianity, and the biblical conflicts that were there were simply not brought up or discussed. Those experts, books, and pedagogical resources had chosen to ignore the conflicts rather than address them. – Brent Hoeffling, Texas

As a pastor, I teach and preach God’s Word. As an archaeologist, I am constantly learning how the Scripture is illuminated by what we discover in the field. The Trowel and the Truth is an extremely valuable introduction into the world of biblical archaeology. The overview of geography in the land of the Bible, the chronology and description of the archaeological ages, and the introduction to fieldwork and methodology have all served to form a foundation for me as I have moved from a casual interest in biblical archaeology to a Square Supervisor serving with Dr. Stripling at two sites in Israel. This book has positively impacted me as an archaeologist and as a pastor. Anyone at any interest level in Biblical Archaeology will benefit from this work. – Durwin Kicker, Missouri

Dr. Scott Stripling is the Director of Excavations at Ancient Shiloh, where the tabernacle was erected for centuries before the temple was built in Jerusalem. Previously, Stripling directed the excavations at Khirbet el-Maqatir from 2013-2017, served as Field Supervisor of the Tall el-Hammam Excavation Project in from 2005 to 2010, and was a supervisor of the Jerusalem Temple Mount Salvage Project in Jerusalem. He is Provost and Professor of Biblical Archaeology and Church History at The Bible Seminary in Katy (Houston), Texas. Stripling serves on the Board of Directors of the Near East Archaeological Society.