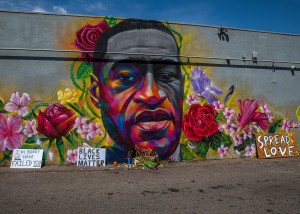 Although relieved by Derek Chauvin verdict, we must keep our eye on reimagining law enforcement

Photo of George Floyd mural and memorial by mana5280 on Unsplash

Like millions of Americans, the National Association of Social Workers (NASW) was relieved with the guilty verdict imposed by the Minnesota jury upon Officer Derek Chauvin for the murder of George Floyd.  Although the verdict was just, it cannot restore Mr. Floyd’s life, nor can this verdict fill the void that will remain forever in the lives of his family and the broader community.

Without a doubt, this is a historically important result, but in the context of deaths of so many unarmed Black and Brown men and women at the hands of police, this conviction almost stands alone in terms of holding police accountable for committing similar or worse acts of violence. While we are justified for breathing a sigh of relief at the verdict, we must not lose sight of the ultimate goal ― the need to reimagine law enforcement and other components of the public safety paradigm that perpetuate systemic racism.

With that in mind, NASW and the broader social work community support the call for a complete and comprehensive investigation ―led by the Department of Justice ―to identify the root causes of persistent patterns of use of excessive force by law enforcement officers against communities of color. Such an official action will send a clear signal to the public that ending this pattern of abuse will not be tolerated. It will also demonstrate that ending the culture of disregard for the lives of Black and Brown people is a high priority for Congress and the White House.

As a gesture to the tragic injustice visited upon Mr. Floyd and the many other victims of police abuse, it is an imperative that the Senate must pass the George Floyd Justice in Policing Act. While this legislation does not address all the necessary police reforms that criminal legal reform advocates deem necessary, it is certainly a good start.

Because we have chapters in every state, NASW is well aware that law enforcement is primarily a state and local function. Therefore, NASW and other national organizations with a state presence must commit to doing the hard work of collaborating on fighting for police reforms at the state and local level. The fact is that unless federal, state, and local criminal legal systems work together to promote and embrace innovative law enforcement solutions and reforms, incidents of lethal excessive force will continue to occur.

We cannot let George Floyd’s death be in vain. We must not allow ourselves to celebrate the verdict but fail to fully commit our passion for justice and our resources to ending systemic racism in our criminal legal system.

Although relieved by Derek Chauvin verdict, we must keep our eye on reimagining law enforcement