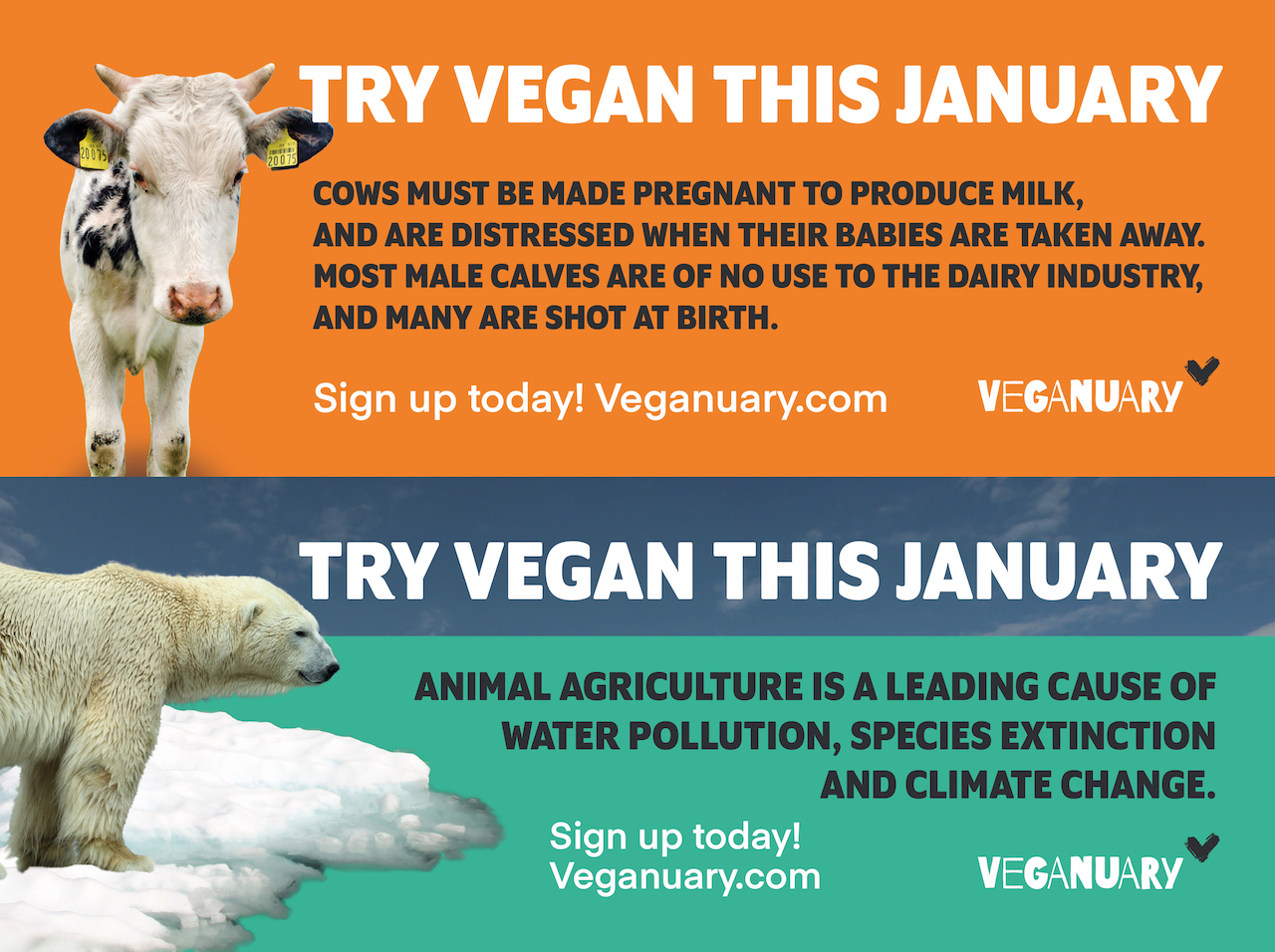 Two advertisements promoting veganism which were removed from public transport by bus company Arriva are to be reinstated after the Veganuary campaign successfully fought the decision.

The ads (pictured) – which launched on 20 buses in Shrewsbury and Telford on 9 December – had been organized and funded by a local vegan group and were due to run for four weeks. Arriva’s decision to remove them came after the company reported complaints, although it would not disclose the number of complaints, nor discuss their nature.

The following message was issued by Arriva in response to complaints: “Advertising on our buses is managed by a third-party company where an approval process is in place. A recent customer complaint brought it to our attention that our agreed sign-off process with this third-party had not been followed on this occasion. We can confirm that the adverts have subsequently been removed. Arriva is and continues to be impartial and the decision to remove these adverts does not relate to the content but was taken as the agreed procedure was not adhered to. We have taken steps to review our approval process with the third-party and are working with them closely on this matter.”

Arriva initially offered a full refund for the advertising, but after pressure was put upon its head office by Veganuary supporters, the company conceded and lifted the ban.

Jo Reff, a local Shrewsbury resident who volunteers with Veganuary, tells NPN: “With it being Veganuary we wanted it to be sorted fast. When they originally told me, it was so close to Christmas that there was no-one I could talk to. All I had … was an email saying there had been a number of complaints. But since then, there have been huge amounts of complaints to Arriva, so them removing it probably far outweighed the complaints beforehand. I’ve had an email today [3 January] to say that they can arrange for the posters to be reinstalled … and it was just an error.”

Commenting on public backlash against the removal, Reff adds: “It’s been wonderful – the support from everyone who realizes that they’re completely appropriate bus posters has just been wonderful. The image is not a graphic image. It’s just basically saying exactly where the meat and dairy comes from. That’s what’s been hidden from everybody really. We see pictures of happy cows in fields, and that’s not the case at all.”

The image is not a graphic image. It’s just basically saying exactly where the meat and dairy comes from. That’s what’s been hidden from everybody really. We see pictures of happy cows in fields, and that’s not the case at all

This isn’t the first time Veganuary has had its messages challenged in Shropshire. In 2018 local councillor for Whittington, Steve Charmley, protested against similar ads, casting a public vote which resulted in Veganuary’s favour and the ads remained in place. The ‘uproar’, says Reff, attracted national press coverage. “This year it looked like different tactics had been used, without any option for defence. The complaints have been very undercover. There was no balance, no equality.”

Prior to the reversal of the decision, Toni Vernelli, head of communications at Veganuary, called the censorship ‘outrageous’.

“The messages are indisputable facts. Nearly every day scientists issue new warnings about animal agriculture’s heavy environmental toll and urge us to eat less meat. And every dairy farmer knows that cows, like all mammals, must have a baby in order to produce milk and it is standard practice to separate the calf from the mother within 24 hours. People have a right to know this and decide if it is something they are happy to support.”

“Last year an investigation by the Guardian revealed that 95,000 male calves are still shot at birth on British dairy farms every year. And in 2017 the Advertising Standards Agency cleared an ad run by Go Vegan World that stated: ‘Humane milk is a myth’. The Agency concluded that while ‘the language used to express the claims was emotional and hard-hitting’, it was a fact that calves were generally separated from their mothers very soon after birth under Defra regulations and so the advert was unlikely to materially mislead,” Vernelli concluded.

Both ads will now be amended to remain month-appropriate and will be reinstated on 17 February. Arriva has also offered additional posters on nine buses in Telford, to be placed no later than 15 January.