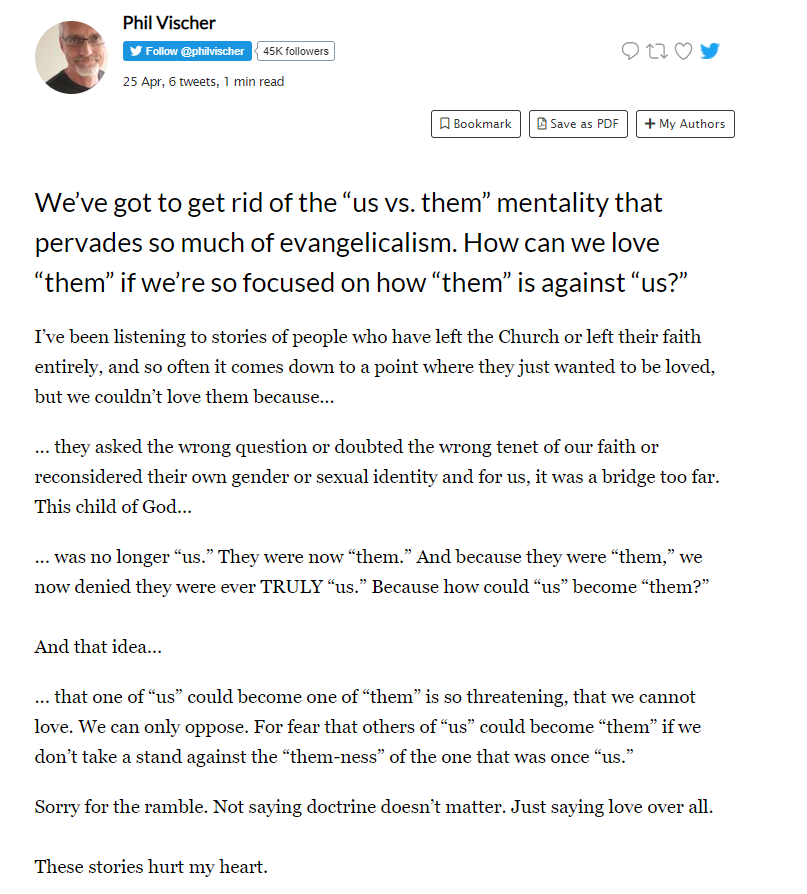 Veggie Tales creator Phil Vischer, the man who swears he’s not progressive despite knocking creationists as a bunch of dummies, crediting his white privilege for the success of his show, arguing that liberals and Democrats are the real pro-lifers who have been reducing abortion, claiming he didn’t know there was such things black Christians until he was an adult, and recently thumbing his nose at “Cracker Barrel Christians” while guffawing with other elites, has decided to let his hand show even a little more, this time on the bible’s view of sexual purity and immorality and how the church ought to treat those in open rebellion.

While at initial blush this may sound mildly harmless, Visher is effectively taking the church to task for daring to come alongside and discipline church members who are openly defying the scriptures and God’s law by “doubting the wrong tenet of our faith” or “reconsider their own gender or sexual identity.”

In context, it’s talking about the notion of “queer Christians” and those with differing views on homosexuality, transgenderism, and gender identity. To use a real-life example, a woman comes out as a lesbian and says she doesn’t think the Bible condemns it, or a married man comes out as transgender and comes to church in drag. What does the church do?

While Vischer argues that this should not result in the church viewing the person as a “them” that is doing anything wrong, this in fact is called “sin and rebellion” and produces “leaven” in the body. If it remains unchecked or accepted, it will leaven the whole lump. Rather than purging the evil from among a congregation, Vischer instead wants to “get rid of its mentality.” He has no concept of the notion that “For whom the Lord loveth he chasteneth, and scourgeth every son whom he receiveth,” and that the Church elders ought to do likewise.

It is not loving to allow someone to remain in their sin, but rather the loving thing to do is to chastise them in order to bring them to repentance. The judgment is love. The rebuke is love. The church discipline is love. The shunning is love, and drawing them back and welcoming them into the body after they have repented is love.

Actually, you are, Phil. You are.

[Editor’s note: This is what happens when you spend too much time talking to tomatoes…]