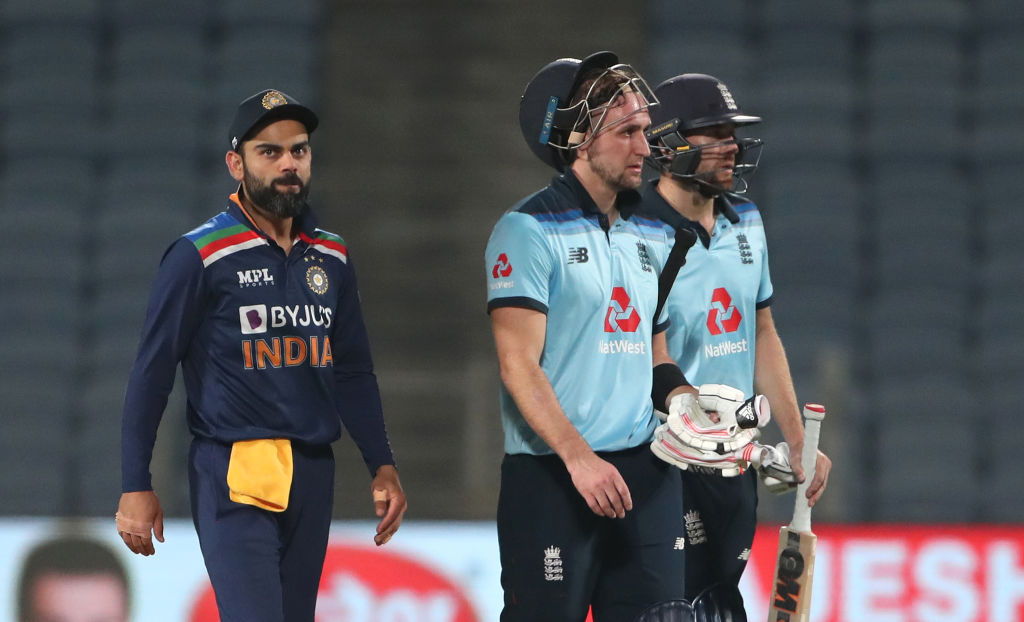 VVS Laxman says India captain Virat Kohli ‘missed a trick’ during his team’s defeat to England in the second one-day international in Pune.

India failed to defend 336 on Friday as Jonny Bairstow smashed a century and Ben Stokes scored 99 to lead England to an impressive six-wicket victory.

A brilliant 175-run partnership between England’s two batting heroes led the chase but India gave themselves a glimmer of hope when, in the space of nine balls, Bhuvneshwar Kumar dismissed Stokes and Prasidh Krishna knocked over Bairstow and Jos Buttler.

At that stage, Kohli turned to his spinners – who has been ineffective earlier in the innings – and England regained composure, eventually winning with 39 balls to spare to level the series at 1-1.

India legend Laxman told Star Sports: ‘It was very difficult for India at that time. Even though Bairstow and Buttler were out, England only had 50 runs to get.

‘Prasidh Krishna came back and took two wickets, but I was a little surprised that Virat Kohli again went to Krunal Pandya and Kuldeep Yadav.

‘If India were going to pull the game back, it was going to be through the fast bowlers. So I thought Virat missed a trick there.

‘But overall, it was an unbelievable onslaught by England. The power and quality was unbelievable. The carnage of Jonny Bairstow and Ben Stokes will be remembered for quite a long time.’

Despite Krunal Pandya conceding 72 runs from six overs, and Yadav 84 from ten, Kohli did not turn to all-rounder Hardik Pandya, who is yet to bowl in this ODI series.

‘I was a little surprised that Hardik Pandya didn’t bowl,’ Laxman added. ‘We knew Yadav and Krunal were under pressure from both ends.

‘You wanted to break that monotony. That’s why I was surprised he was not even given four or five overs.

Kohli, meanwhile, hailed England’s sensational batting performance after the defeat which leaves the series poised at 1-1 ahead of the decider on Sunday.

‘We didn’t execute too well but I thought they batted brilliantly tonight,’ the India skipper said. ‘It was some of the most amazing batting you’ll see when chasing.

‘They totally blew us away during Jonny and Stokes’ partnership. We didn’t even have a chance.’