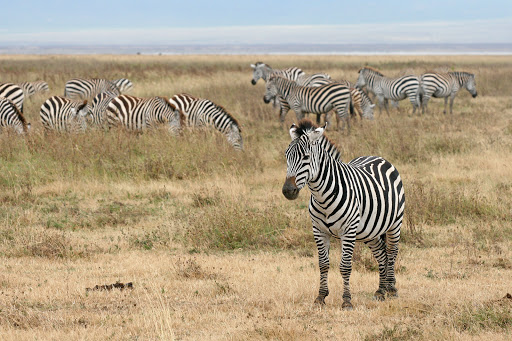 Why Do Zebras Have Stripes? Scientists Camouflaged Horses to Find Out - The New York Times

News this week that scientists believe they have explained the reason zebras look like they're living barcodes, is another major embarrassment for 'Intelligent Design' hoaxers.

It is also yet another casual vindication of the Theory of Evolution, done simply by revealing the truth. It's perhaps worth reiterating at this point that scientists don't set out to disprove creationism and confirm evolution - there would be absolutely no point in doing that yet again. They refute creationism and confirm the science simply by discovering the facts.

First, I'll deal with the vindication of evolution before moving on to how it's yet another refutation of the ID hoax.

An international team of ecologists and conservation biologists led by Tim Caro of Department of Wildlife, Fish and Conservation Biology, University of California Davis, Davis, California, USA have concluded that the zebras' stripes help protect them from biting and potentially parasite-carrying flies.

Abstract
Averting attack by biting flies is increasingly regarded as the evolutionary driver of zebra stripes, although the precise mechanism by which stripes ameliorate attack by ectoparasites is unknown. We examined the behaviour of tabanids (horse flies) in the vicinity of captive plains zebras and uniformly coloured domestic horses living on a horse farm in Britain. Observations showed that fewer tabanids landed on zebras than on horses per unit time, although rates of tabanid circling around or briefly touching zebra and horse pelage did not differ. In an experiment in which horses sequentially wore cloth coats of different colours, those wearing a striped pattern suffered far lower rates of tabanid touching and landing on coats than the same horses wearing black or white, yet there were no differences in attack rates to their naked heads. In separate, detailed video analyses, tabanids approached zebras faster and failed to decelerate before contacting zebras, and proportionately more tabanids simply touched rather than landed on zebra pelage in comparison to horses. Taken together, these findings indicate that, up close, striped surfaces prevented flies from making a controlled landing but did not influence tabanid behaviour at a distance. To counteract flies, zebras swished their tails and ran away from fly nuisance whereas horses showed higher rates of skin twitching. As a consequence of zebras’ striping, very few tabanids successfully landed on zebras and, as a result of zebras’ changeable behaviour, few stayed a long time, or probed for blood.

So, in this beautifully simple experiment, the team showed that the zebras' stripes are somehow confusing blood-sucking flies so they can't judge distance well enough to alight successfully on a zebra in many cases.

Previously, there had been attempts to explain the zebra's stripes in terms of confusing the larger predators such as lions, leopards, hyenas, etc. It had been assumed that stripes against the African landscape acted either as camouflage or, especially in a heard, broke up the outline of individual zebras, making them harder to single out for attack.

Now it is looking far more likely that the evolutionary drivers have been the predation not by the big predators but by the small ones, and probably the parasites they can infect the animals with. Evolution, of course, is oblivious to the size of the predators, only on the effect they have on the species gene pool.

Now, why is this en embarrassment for the ID hoaxers?

At the risk of this being glaringly obvious, I'll point out that, if we for a moment allow the design of a designer at work here, what we have is an arms race with the designer apparently being on both sides at the same time! ID hoaxers are not permitted to propose the obvious solution to this paradox by proposing two or more designers of course, because they are wedded to the idea that their putative designer is none other than the Christian god, and so is the only god in the reckoning. Despite their pretense that ID is 'real science' and just an alternative scientific explanation of the facts, they are stuck with it also having to comply with Christian fundamentalism.

So, allowing for the moment then that a designer is actually responsible, what we have is a designer designing zebras, then designing parasites to live in their blood and a delivery system consisting of biting flies. Then, bizarrely, this same designer has seen this neat little arrangement, which all seems to be for the benefit of a clutch of endoparasites, as a problem to be solved - from the opposite point of view of the zebra. So it has designed a nice, striped coat for the zebra to thwart its own plan for the parasites!

If anyone can see any intelligence in that, then I assume they are using a private definition of the word 'intelligent' that incorporates the idea of utter, mindless stupidity and more than a little mendacity.

If you've enjoyed my blog please show your appreciation by giving to a great cause - Oxfam
Be Humankind. Feed the world.