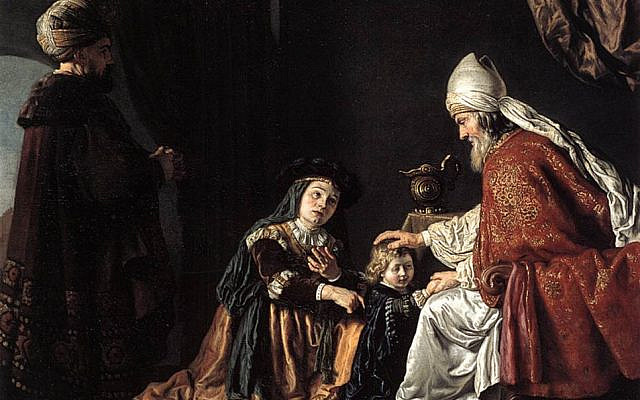 Hannah in the tabernacle of Yehuda Meshi Zahav

Hannah Giving Her Son Samuel to the Priest

It takes a village to raise a serial sex offender.

Following reports over the weekend, the founder of one of Israel’s most well-known public charities, Yehuda Meshi Zahav, stands accused of sexual predation against boys, girls and grown women spanning forty years, allegations which he denies. Public indignation has called for an investigation of his actions. But the investigation must not stop there. The reports claim that throughout this long period, many knew of his alleged abuses and that in his community of Meah Shearim it was an open secret. To rid ourselves of the scourge of sexual predation, we must identify the social elements that foster the silence and complicity that are its breeding ground.

As a child in the 1970s, I was groomed by convicted sex offender Stanley Rosenfeld, a teacher and principal in the elementary school I attended. I see the wreckage that he has wrought in the lives of some of my classmates and know that there but for the grace of God go I. Investigations into the communal dynamics that enabled him and others like him to commit atrocities across many years are revealing, and especially so for religiously conservative communities.

The silence in such communities is fostered by multiple factors. First, sexuality generally is a taboo subject, and so even when there are rumors of offense, these are swept under the rug. Second, there is fear that public exposure of the issue will stain the community, or particularly the institutions with which the offender is associated. Third, fear rises within insular communities suspicious of the state, that to bring an alleged offender to the authorities would constitute the treasonous act of moiser, of turning over a fellow Jew to the supposedly ruthless hands of the secular state. And finally, when the offender is a person of power, as is allegedly the case here, many remain silent for fear of retribution.

Community reform is possible. Forum Takanah, established in 2003, provides the Religious Zionist community with a body to handle complaints of sexual harassment without the involvement of law enforcement and legal authorities. Sexual predators are found in every sector of society. But the bold and broad awareness today of sexual predation within the Religious Zionist community means that unchecked serial predation spanning decades, of the type perpetrated by convicted offender Mordecai Elon, seems now to be a thing of the past.

Hannah refused to pretend all was fine

Few of us are communal leaders who can set a new communal agenda. But all of us can learn an important lesson from the first figure in world literature who sought to challenge a culture of sexual predation: the biblical Hannah. Hannah, as she is portrayed in the opening chapter of First Samuel, is usually construed as a barren woman, tormented by her husband’s second, fertile wife while the entire family celebrates its annual pilgrimage to the Tabernacle at Shiloh. Desperate, she flees to the Tabernacle and makes a quid pro quo with the Almighty: give me a son, and I’ll give him to you as a servant in your Tabernacle.

But this conventional reading overlooks a subtle nuance in the story. Scripture tells us that her husband Elkanah would bring the entire family on a pilgrimage to the Tabernacle, where “Hofni and Phineas, the sons of Eli, were ministering to the Lord.” The note is anomalous because, throughout that narrative of that story, these two never figure again. Why then are they mentioned?

Reading much further on in the story, we learn that these two enacted a reign of terror and corruption encompassing all aspects of the Tabernacle service. Women who sought entry into the Tabernacle needed to first provide them with sexual favors. Yet in spite of this, all of Israel dutifully complied; no one spoke out. All were fearful of the power of the two priests and the ticket to access to the Lord that they possessed.

When we read this shocking account, we realize the silence in which we as readers were complicit in chapter 1. Elkanah brings the family to Shiloh, and there is great merriment at the holy pilgrimage. All seems right; even holy. But the text tells us in a subtle way, that “Hofni and Phineas the sons of Eli were ministering to the Lord.” Later we discover just what that means. But we read chapter 1 through the silence of the lambs that allowed their malfeasance to reign free. All accept this as the norm –except for Hannah.

Hannah is put off by the taunting of her husband’s other wife, and by the fact that human dignity and sensitivity are trampled in the name of holy pilgrimage. But Hannah also deplores the wider web of corruption that all fail to see: “Hofni and Phineas ministering to the Lord.” She flees from the emotionally abusive pilgrimage feast to the Tabernacle. There she appeals to the Lord for a son – a son that she will raise with a different set of values, and who will infuse a new and reformed spirit in the Tabernacle service.

Hannah was apparently powerless to even call out the predation she saw. But she took the first step – she saw the truth for what it was and refused to be part of the charade that pretended that all was holy and fine.

The organization Meshi Zahav headed gained renown for performing the holy task of gathering the shattered limbs of the victims of suicide bombings. It is known by its acronym Zaka, which stands for zihui korbanot ason, Identifying the Victims of Tragedy. It is now the community’s responsibility to identify those who were allegedly victimized, to provide their shattered souls a place of dignity, to ensure that the silence of complicity reigns no longer in our village.