The Last Chance of Freedom for Mumia Abu-Jamal, the United States' Mandela – Framed for Killing a Cop 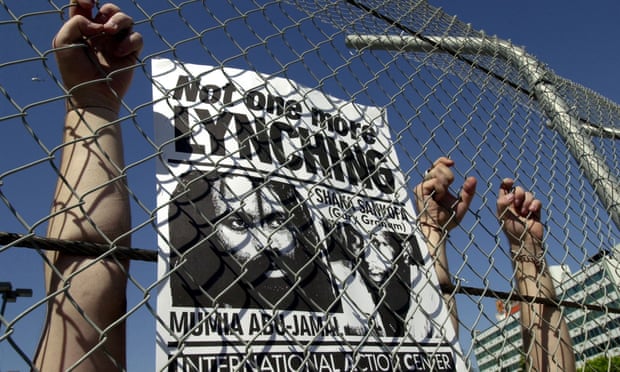 Alice Walker once said of Mummia abu-Jamal that "He reminds me of Nelson Mandela.".
Mumia Abu-Jamal was the victim of a frame-up 37 years ago on charges of killing a cop.  He is one of the last Black Panther prisoners and having caught Hepatitis C in prison, he now has cirrhosis of the liver. He was only cured of Hep C after a legal fight because the prison authorities did not want to spend the money on a cure. One assumes that given the nature of the US medical system the only cure for cirrhosis, a liver transplant, is out of the question.
Mumia’s long and determined fight against a system that for many years kept him on death row is a testament to his political will and consciousness. It is to be hoped that the decision to give him the chance of appeal won’t be appealed by the current Pennsylvanian authorities who pose as being more progressive.
Tony Greenstein
Political prisoner Mumia Abu-Jamal granted a chance to appeal his case
A Court decision in Philadelphia will allow Mumia Abu-Jamal to reargue his case. Mumia has spent 37 years in prison after being falsely convicted of killing a Philadelphia police officer in 1981.
Mumia Abu-Jamal, a former Black Panther and renowned writer and activist of 64 years, who has spent 37 years behind bars for a crime he did not commit, has been allowed to reargue his case before the Pennsylvania Supreme Court. A judge in Philadelphia delivered the decision on December 27 on the grounds that the Chief Justice at the time of sentencing, Ronald Castille, refused to recuse himself from the case despite his earlier role as a district attorney during Abu-Jamal’s appeal.
Activists across the world celebrated the decision by the court that could mean that freedom for the 64 year old revolutionary is within reach.
Abu-Jamal was arrested in 1981 on charges of killing a white police officer, Daniel Faulkner. In 1982, he was convicted and sentenced to death in a trial that was filled with violations and irregularities, including witnesses changing their testimonies several times, court clerks stating that they wanted to convict him and concrete proof of evidence tampering, among others.
The sentence was condemned by activists and human rights organizations across the globe and since then, there has been a fierce campaign demanding his release. In 2011, after strong pressure and campaigns, Mumia was sentenced to life without parole and was moved off the death row.
After he was moved off death row, Mumia talked to Democracy Now in a rare live interview in 2013 about what it felt like: “Well, I could, but I’d be lying, because I call this “slow death row.” “Life” in Pennsylvania means life. Pennsylvania has one of the largest “life” populations of any State in the United States. It has the distinction of having the absolute highest number of juvenile lifers of any state in the United States—indeed, of any jurisdiction in the world. So, that should give you some sense.”
A couple years ago, activists had to fight a sustained struggle in order for Mumia to have access to proper health care when his life was at risk. After Mumia fell ill in prison, it was discovered that he was suffering from hepatitis C. The Pennsylvania prison system refused to treat Mumia or the other 7,000 prisoners suffering from hepatitis C, as the treatment cost would be around $100,000. His legal team filed a suit and won and guaranteed treatment for Mumia, a decision which not only affected him but set a precedent for other incarcerated people to have access to treatment.
Though these victories are important, the objective for activists has always been and will always be Mumia’s complete freedom, (and that of all political prisoners).
The latest verdict represents a new possibility in the struggle for Mumia’s freedom. In the appeal, Mumia’s defense team may have the opportunity to present all of the violations that have occurred throughout the legal process, information that unequivocally points to bias by the judiciary to seal his sentence. However, like all of the victories that have been achieved thus far in Mumia’s case, and in the cases of many other political prisoners, a victory in the courtroom now will only be possible if if there is accompaniment and solidarity from activists and movements across the world.
The best known of all incarcerated black radicals speaks out in a two-year email correspondence with Ed Pilkington on the ‘continuum’ of the Black Panthers to Black Lives Matter

Ed Pilkington
Mon 30 Jul 2018
The letter was dated 30 August 2016. Written in black ink in spidery, meticulous handwriting, it proclaimed at the top of the page: “On a Move!”, the mantra of the Move group of black liberationists from Philadelphia who clashed violently with the city’s police force 40 years ago, sending nine of them to prison for decades.
The author was Mumia Abu-Jamal, who is the closest thing that exists today to an imprisoned Black Panther celebrity. He joined the Black Panther party in the 1960s when he was just 14, and later became a prominent advocate for the Move organization.
For the past 36 years he has been incarcerated in Pennsylvania prisons, including two decades spent on death row, having been convicted of murdering a police officer at a Philadelphia street corner in 1981. His case has reverberated around the world, inspiring admiration and opprobrium in equal measure, in what has become a global cause-celebre.
As such, he could be regarded as the figurehead of the cadre of imprisoned African-American militants who are still behind bars today. Collectively they amount to the unfinished business of the 1970s black liberation struggle, as they languish still in prison in some cases almost half a century after they went in. 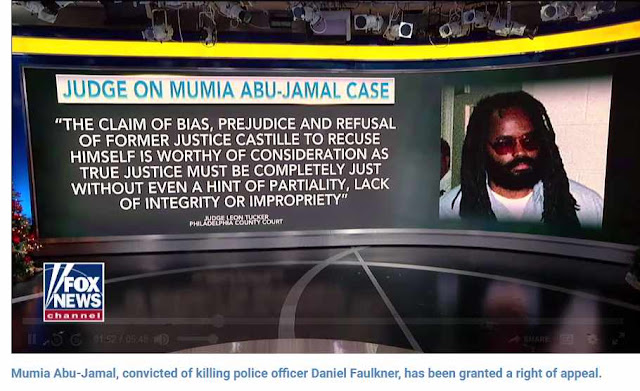 UPDATE
February 19, 2019
The event at Yale organizing the REBLAW conference, happened on Friday and Saturday February 15th and 16th and was a great success.  Mumia called in on Friday night.  Confrontations of Krasner wherever he speaks are continuing and educating many audiences.
On December 27, Judge Leon Tucker, surprised and pleased Mumia supporters by ruling that Mumia was entitled to a new appeal of his case.  His position was very clear:  Ronald Castille, who ultimately became Chief of the Pennsylvania Supreme Court, after having worked in the District Attorney’s Office prior to becoming a Pennsylvania Supreme Court Judge, should have recused himself from the case when it came before him at the Pennsylvania Supreme Court.  Though Tucker did not conclude direct involvement of Castille in Mumia’s case, he ruled that Castille’s well known and well publicized support for the death penalty, close relationship  with the Fraternal Order of Police (FOP), and the high profile of Mumia’s case all led to the appearance of bias on the part of Castille, and that that appearance of bias was not acceptable.
Mumia was thus granted an opportunity for a review of his post-conviction review before the Pennsylvania Supreme Court, that is, the opportunity to present all the material previously rejected on the Castille court, all over again.  This was a major breakthrough in opening up the possibility of Mumia’s release.  Regardless of this very significant and unusual ruling, Mumia should have of course been released long ago, in fact, should never even have been arrested since he was and is an innocent political prisoner.  He was clearly framed by the police (the Fraternal Order of Police playing a major role), the prosecutors, and the judiciary, with the cooperation of other significant players in the Government and even additional sectors because of his effectiveness as a political activist and well-known writer and journalist.
To the disappointment of some, who had expected “progressive District Attorney” Krasner to play a positive role in this case, as he had promised during his campaign to address all cases of prevous miscarriage of “justice”, Krasner appealed the very positive judge’s ruling, thus closing off the possibility of a quick process potentially leading to Mumia’s release.
As word, and organizing to pressure Krasner to change his position, spread, a group of students at Yale Law School took a dramatic position in “disinviting” Krasner as a keynote speaker at a conference at Yale on “rebellious lawyers”.  See letter below where the students ask Krasner to withdraw his appeal of Judge Tucker’s ruling if he wishes to speak at the conference.  Mumia Abu-Jamal was immediately scheduled to replace Krasner as a key speaker at the conference.
Additionally, on December 28, Krasner announced that he found six boxes of Mumia materials marked with Mumia’s name, that had not been discovered before and were therefore not reviewed in the court proceedings of the past two years!  He passed that information on to Judge Tucker on January 3, 2019 and released it to the public on January 9th, 2019.  On January 25, 2019 District Attorney Krasner gave notice of his appeal of Judge Tucker’s ruling!
Source: azvsas

The Last Chance of Freedom for Mumia Abu-Jamal, the United States' Mandela – Framed for Killing a Cop