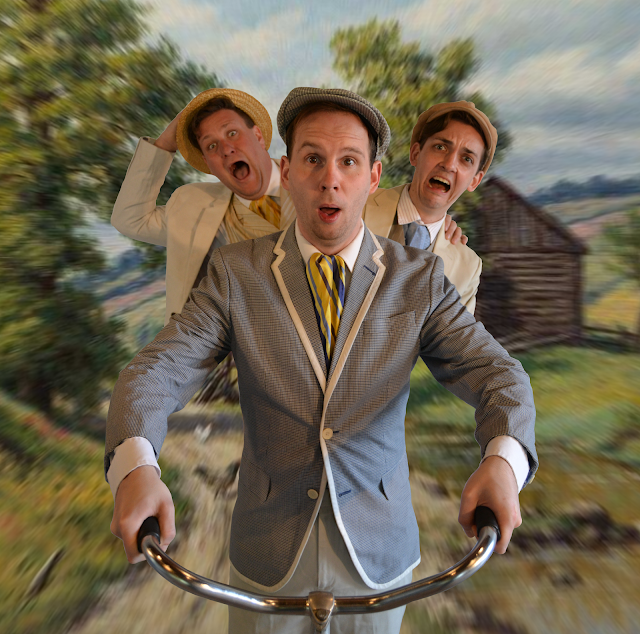 From left to right: David DiFrancesco, Matt Pilipiak, Victor Pokinko. Photo by Mark Brownell
Saw two shows today and both were sold out. So I gave myself a day off before tackling these reviews. Both had people I adore involved so I was really looking forward to them.

Three Men on a Bike

Back in 2000, I had the privilege of working on a workshop of a new musical with a book and lyrics by Mark Brownell. Since then, I've been a fan of him and his wife, the amazing director Sue Miner, who together make up Pea Green Theatre, who have been doing fringe on and off for decades, starting in 1990(!).
This play is the sequel to the fringe smash adaptation of Jerome K Jerome's Three Men in a Boat. (In the which the play is vastly superior to the book.) I loved Three Men in a Boat so wanted to see if they could recreate the magic.
They did.
As one of my watching companions put it, Sue is the master of creating a world with a almost bare stage. Two stools and hats (and a stuffed dog) is all she needs to create all the various locations and objects that take us on this journey. The pacing is perfect. Mark makes the dialogue and the action sing.  (Which was something I really appreciated when I tried to read Three Men in a Boat, which is slooooooow). And the acting was fantastic.
I've heard a lot of people talk about it and only one admitted it wasn't her thing. So if you like witty banter and tales of hilarious mishaps, try and get a ticket!

This show came on my radar because of the divine Charlotte Moore, whom I've known for decades and haven't seen perform in years (she's been doing stuff - I just haven't been able to see it). Then I found out Andrew Lamb directed. Then I found out Tara Baxendale, Denise Norman, and Jillian Rees-Brown, three amazing women I see so rarely on stage, were in it. Plus setting it in a retirement home? This was a show I really wanted to see.
I ran into some other lovely ladies in the audience I hadn't seen in a while and we all had the same word to describe it. Cute. It's very cute. It's also a work in need of further development, especially in regards to the songs. More than once the notes seemed out of the range of the actors, which leads me to believe that the composer didn't want to adjust to the voices he had instead of the ones in his mind. It also felt that a couple of the songs were unnecessary or too long.
Andrew does a wonderful job with what he has. Charlotte is her usual tour-de-force. Denise and Jill do some beautiful work together. Tara nails the rec directors I know at my parents' place. So I was really happy with what I saw.
Well, except with all the talk of powers of attorney. That felt like a knife in my heart as we had to do that for my mom in the way that is shown as unfair in the play. It was so hard at the time and I hated doing it so it hurt all over again. I get that the kids have to play the villain in the piece but it's not so simple. Sorry mom. We're doing our best. If you want to go on an adventure like the folks in this play, we'll make it happen.
Oh, one prop that drove me nuts. Don't give them dabbers! As my fave rec person said, WWIII will be started by old bingo ladies. At my mom's place, they don't get projectiles.