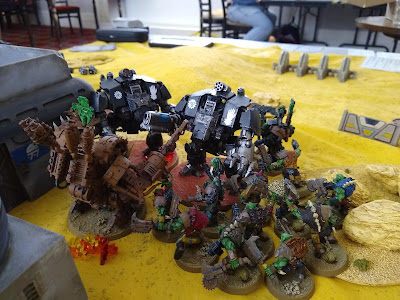 Thursday evening was another Warhammer 40K clash for Waaagh Scrivs. This time it would be against James with his Iron Hands, 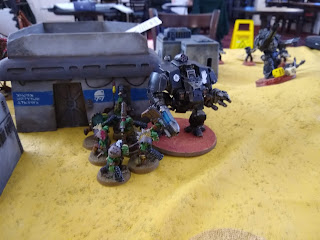 Again we would both be using 750pt forces, I had a Warboss in Mega Armour, a Weirdboy, two units each of ten Beast Snagga boys including a Thump Gun, a unit of ten Boyz, three Deffkopters and a Deff Dredd. 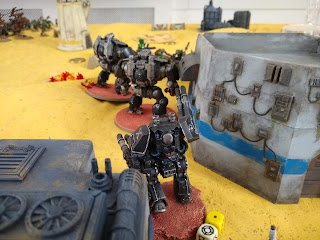 We rolled up the Divide and Conquer scenario and I picked as my secondaries While we stand we fight, Line breaker and Mental interrogation.

Well, the Iron Hands take the first turn and the only unit they can see, the Boyz is swiftly obliterated.
Waaagh Scrivs emerges from cover and unleashes our fury, one unit of Beast Snagga's is Da Jumped close to the nearest Redemptor, then in the charge phase smash into him, several wounds are mashed onto the Dreadnought but it does survive the first impact. The Deffkopters swoop down and account for a single infiltrator. 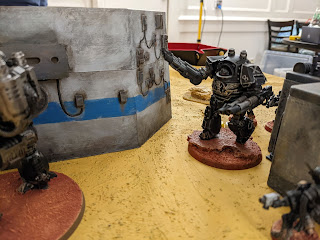 With my Snagga Boys contesting his only objective, James does not get to claim any primaries this turn, his attempt to fall back from the Beast Snaggas is also thwarted so a second Redemptor is committed to the fight. All the boyz are mashed up but it's now my second turn, and I do get some primary objective points and also get to declare a Waaagh.
With the exception of the Weirdboy, every model I have is now in combat with the two Redemptors who survive it on one wound each! 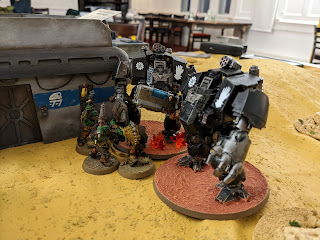 In his turn James falls backs with the Redemptors and I forget to scrag one of them, his Techpreist starts restoring wounds too, I'll not forget to scrag next time!
My Warlord is blown away by some terrible saving rolls against the the Volkite culverin but the Infiltrators who are committed to the fight are mashed up. Although my troops are dying in droves I'm racking up the primary objective points. 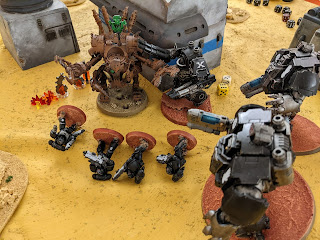 Come the end of the game James has the Tech Priest and all his Dreadnoughts left, but he's not scored a single primary objective point, but has racked up 33 points of secondaries, I've only scored 11pts from secondaries, but, do have 25pts of primaries for the win.

A quick checks shows that James had misread the rules and picked all his secondaries from the same section, so an even worse result for the Iron Hands despite the mounds of dead Orks.