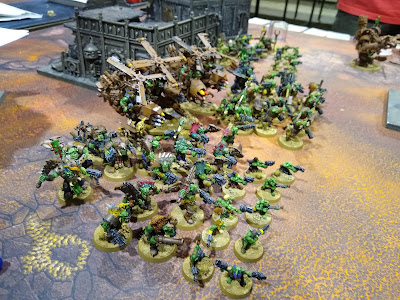 Waaagh Scrivs and the Death Watch

It was over to Warhammer World to meet up with Pete again, this time he had bought his Death Watch Marines to face the Orks.

I'd done a bit more painting since the last game, so this time fielded at 1250pts, Warlord in Mega-armour, Weirdboy, two mobs of 10 Beast Snaggas, one mob of 15 Boyz, two mobs of 10 Gretchin, two mobs of 5 Bobs, four Deffkopters and the Deff Dredd. 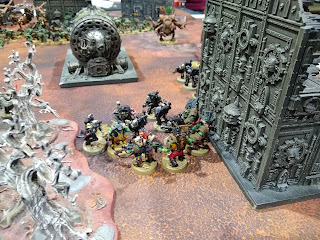 Pete fielded Captain, Chaplain and Librarian, six Marines with Heavy Bolters, three Kill Teams with a variety of clobber, a squad of four bikes and a gunship.
I cannot recall what the mission played was, but, it was along the length of the table and each player had a "deep" objective that was worth more. 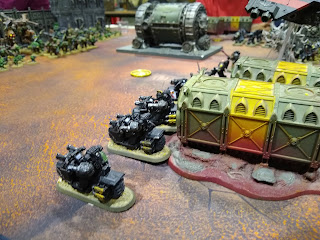 Greg, a young lad was visiting Warhammer World looking for a game so he joined in with the Orks, you can never beat the dice rolls of a young'un.

I went for a pretty standard "Tide of Orks" deployment, Pete set up a gun-line, but with one Kill Team in the gunship. 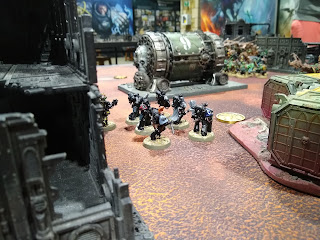 The "luck of youth" saw me getting the first turn, for, what I think the first time ever!
Straight into the first Physic Phase a unit of Nobs was launched into the back field of the Marines and in the ensuing charge phase they were at grips with the Heavy Bolter team. A combination of Deff Kopters and other more desultory shooting saw one of the Kill Teams reduced to a single Marine. This first turn business is the best! 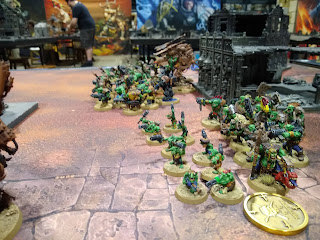 Pete was on quite the back foot already, but intervention of the Captain and Chaplain did finish off the Nobs but the Heavy Bolters were sorely damaged and out of action at a critical moment of the game.
The gunship was now deep in my deployment area and the covering Beast Snaggas had been reduced to a single Boss. Waaagh was called and the Orks surged on. 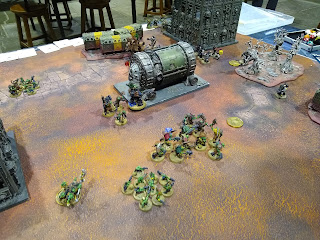 The Deffkopters dealt with the Gunship and the rest of the Boyz laid into the remaining Marines, at the end of the third turn there were only five Marines stood standing. Not only had the Orks been tearing up Marines, they had been racking up the Victory Points too so we called it there. 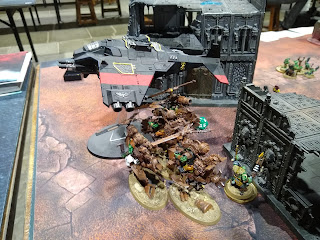 Getting first turn and then the extraordinary dice rolling of young Greg meant that Pete was on the back foot from the start. We are playing again next Wednesday, can Waaagh Scrivs be blunted?

Waaagh Scrivs and the Death Watch