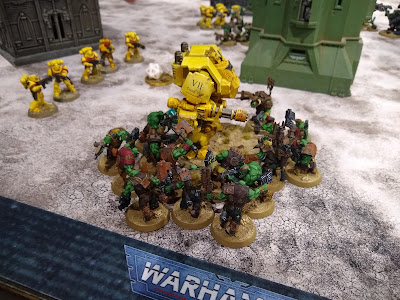 Waaagh Scrivs and the Yella 'Umies

A very belated report of a game that happened last week that I've only just had a chance to blog.

I met Pete at Warhammer World I took the Orks, he took Imperial Fists and at 1250pts was the biggest game that I've played so far. 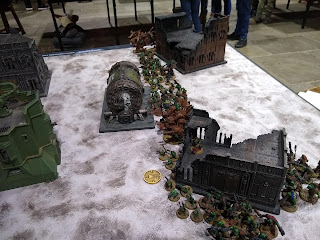 My list was: Warboss in Mega Armour, Weirdboy, two Runtherds, two mobs of 10 Grots, two mobs of 10 Beast Snagga Boyz, two mobs of 15 Boyz, one mob of 6 Nobz, three Deffkopters and a Deff Dredd. Really not sure exactly what Pete had, I forgot to take a note, but there was some top Marine, a Librarian, a Dread, some scouts, some heavily armoured Marines, some flying Marines and several units of standard Marines. 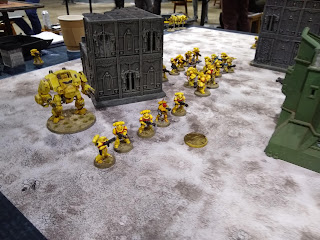 The terrain was fairly open, broken only by some large buildings, we were playing a scenario from the latest tournament pack, one central primary and four in the usual square around it. For my secondaries I chose Mental Interrogation, While We Stand We Fight and Get The Good Bitz. 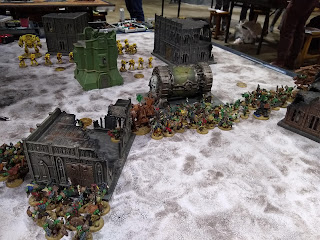 Pete Took the first turn and although the shooting was quite brutal only the Nobs were seriously depleted with just the Boss remaining and the Deff Dredd was on three wounds! In return I rushed forwards dropping the Runtherds on the Good Bits and managing to charge a unit of Marines with the  as yet unscathed Deffkopters, these are usually dead on turn one! 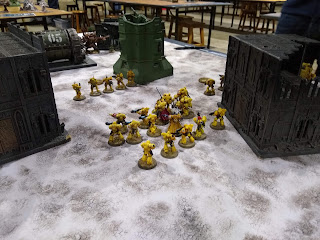 The second turn saw the flying Marines swooping onto the field and obliterating a unit of Beast Snaggas, the other unit was also shot to shiny by the Mega Marines.
The mega Marines charged the Deff Dredd but really buggered up their attacks leaving it on one wound with the return Dread Klaw attacks seeing an end to those fellas. The Deffkopters continued with their attacks getting the upper hand in the combat. 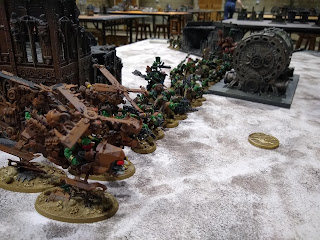 Of course it's now my turn two and that can only mean it's Waaagh time. Across the line my remaining troops surge forwards with only the sluggish War Boss failing to get into combat, this is becoming a pattern.
A unit of Boyz and the remaining Nob Boss are power clawing away at the Dreadnought, the Scouts are scattered to the winds and the Deffkopters are mashing away at the Marines facing them - these fellows are going to make it to turn three! 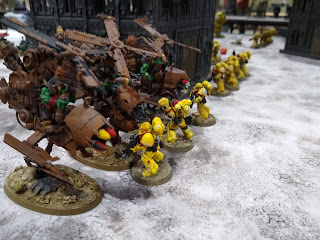 Pete supports the fight against the Deffkopters with another unit of Marines. The Deff Dredd finally succumbs to fire and exploded, but Careens into the middle of the Marine army causing Mortal Wounds a-plenty.
I've not got many Orks left but the Marines are also very thin on the ground, a 12" charge by the Grots sees them joining in the fun with the Deffkopters and the Dreadnought is dispatched and the Boyz advance on it's supporting marines. 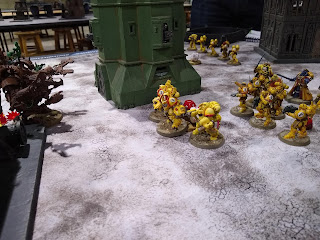 Waaagh is coming to an end, but the Deffkopters and Grots wipe out all the marines there and my forces are holding three primary objectives by now with the Marines very thin on the ground. 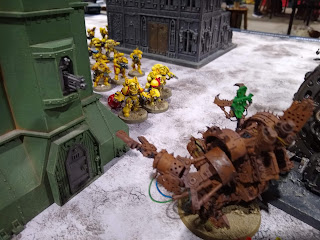 The Deffkopters are free of combat now, so leaving the Grots to hold the objectives they fly off to take on those flying Marines who all go down in a barrage of Kopter Rockits.
The Warboss makes it late into the combats but cleans up all the Marines in the middle of the table so advances menacingly on the last unit of Marines. 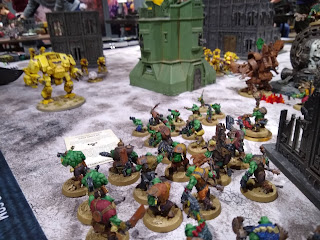 With time to pack up looming and only one unit of Marines left on the table we wrap up the game at the end of turn 4. My "usually dead at the end of turn one" Deffkopters not only survived but were also still at full strength at the end of the game! I think Pete rued not taking a few power fists in his force. 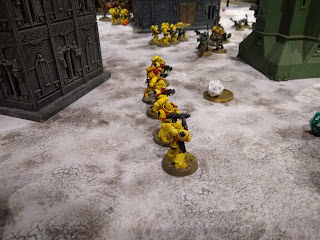 I've done a lot better at picking secondary objectives this time, I only scored 3pts from Mental Interrogation, but that's because there were no Marine characters left after their turn three, While We Stand We Fight netted 10pts and Get The Good Bits contributed the full 15pts added to the 36pts from primaries gave a creditable 64 points, the Marines scored well but where quite short of this total, mainly because I'd kept them off the objectives. 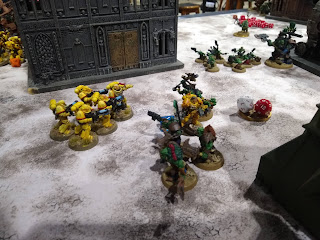 1250pts is the biggest I've played so far and I'll have to up my game to get 5 turns in three hours done at this level.
Source: scrivsland

Waaagh Scrivs and the Yella 'Umies