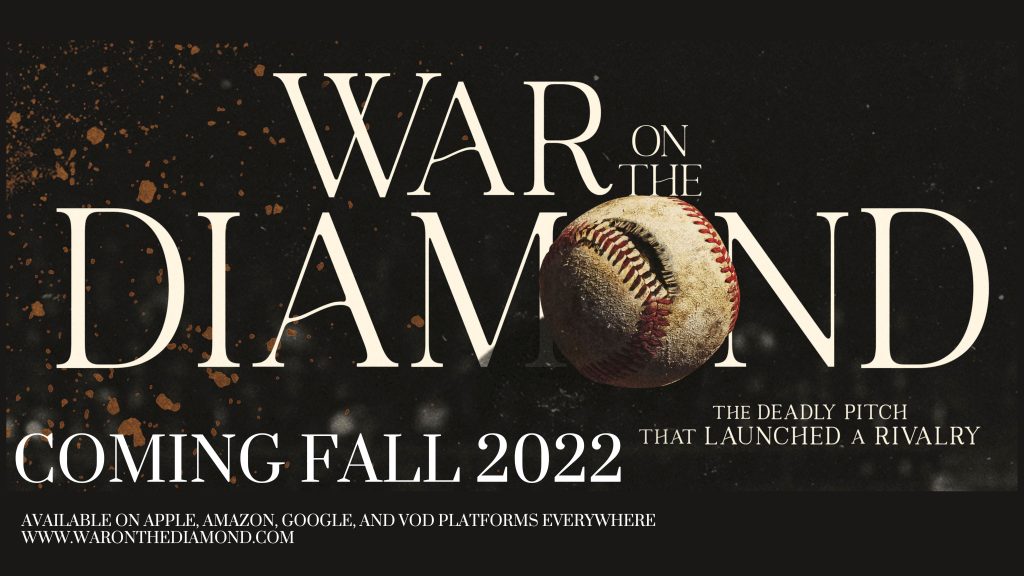 War On the Diamond is a new documentary to watch!

In a way, it is the history of Cleveland baseball and all of the disrespect, and this documentary is carefully crafted around a beanball that killed a Cleveland Indians’ player named Ray Chapman in 1920. The pitch that killed Chapman came from the hand of a New York Yankees pitcher, hence the title, “War On The Diamond”. It’s set in the battle between Cleveland and New York that dates back over 120 years of baseball game, and between the fans, the cities, and so much more.

“Buried treasure,” Bob DiBiasio who is the Senior VP for the Cleveland Guardians called it when they found Chapman’s plaque that hung in League Park and then was crated away when the stadium was torn down. “His death stung the country.”

The documentary is based on a book by Mike Sowell titled, “The Pitch That Killed.” The  director, Andy Billman, has done numerous ESPN Films and 30 for 30s, and spent his formative years as he told us growing up as a Cleveland Indians fan. His teenage years were spent watching tough playoff battles in the 1990’s between Cleveland and New York. So yes, it is personal for him, and it made him the perfect person to direct this and form this into the final piece.

This documentary takes you back in time with vintage footage and then to the present with some wonderful interviews. The storytelling, cinematography, directing, and editing is brilliant. This is a story about baseball and life. It includes dozens of interviews, press clippings, and a retelling of a moment in time 102 years ago about the beanball. Six minutes into the documentary, Lesley Visser’s voice appears in a voiceover before her face fades in.

“I have a couple pieces of advice for my girlfriends. I always tell them — you must never love a man who doesn’t love baseball,” Visser says. “Baseball is everything. … Baseball taps every emotion.”

Your baseball emotions will be tapped when you watch this. The documentary is one hour and nineteen minutes, and it included the attack of the midges in the Cleveland/New York ALDS series that was Joe Torre‘s last. The two teams had so much history and the visions you get take you in an out between all of it and quick order.

As the viewer sees these slices of history, the editing takes you back and forth with the Chapman story that weaves you through a century’s worth of baseball. The pitcher who threw that fateful pitch that killed Chapman was the son of a minister. Carl Mays is the only pitcher in MLB history to throw a hit-by-pitch that resulted in a death.

“It’s kind of like owning the Mona Lisa,” Steinbrenner said. “There’s only one New York Yankees, but there’s a hell of a lot of Cleveland Indians.”

The story is so much about the history of Cleveland baseball intertwined with the New York Yankees especially since the late George Steinbrenner was from Cleveland and owned a failed Cleveland ABA basketball team before he tried to buy the Cleveland Indians for over $8 million, and you will have to watch the documentary to see what that was all about. After that, he pivoted to buy the New York Yankees and the rivalry in the 1990’s was reunited with mostly the Yankees on top. Billman’s personal knowledge of everything baseball just makes this a great baseball documentary.

There were the years when Bob Feller would battle Joe Dimaggio. It was baseball royalty from those teams. Feller even no-hit the Yankees in New York after he returned from his service during World War II.

Cleveland has two World Series wins in their entire history. The first came in the same season when Chapman was killed, the other was 1948 after World War II in Feller’s third full season after he returned from the war. While Cleveland would go to more World Series, they were all losses including 2016. Their drought for hoisting a World Series trophy is now 74 years. The Yankees have won 16 World Series since Cleveland’s last championship, and of course won World Series on either side of Cleveland’s 1948 triumph.

The current Cleveland Guardians were founded in 1901 as the Cleveland Blues. That name describes so much of their history even though that name only lasted one season, and then the following season one year as the Cleveland Bronchos. The a dozen years as the Cleveland Naps with a name that kind of described them well as they slept through several seasons on their way to becoming the Cleveland Indians.

“I didn’t have any feeling of guilt whatsoever. … I didn’t hit Chapman — Chapman hit himself,” Mays was quoted in the documentary.

Mays was sent to the District Attorney’s office and was cleared of any criminal wrongdoing. But the stigma of Chapman’s death always followed him. Joe Sewell at 21 years old would replace Chapman in what would become a Hall of Fame career. His first taste of MLB baseball would also be 22 games in that 1920 season and a World Series win. Cleveland wouldn’t even taste the postseason again until 1948. That wasn’t even the team’s longest postseason drought which occurred from 1955 through 1994. Can you imagine 40 years without postseason baseball while the Yankees were in the postseason so often.

“When I was pitched the documentary in 2020, I was pitched to do the story on ‘The Pitch That Killed’ and I came back with, ‘Well, I would like to do that story and more’ since there are so many connections between Cleveland and New York,” Billman said. “You throw in Chapman, Herb Score, Bob Feller, and George Steinbrenner and you have some great stories and connections.”

The documentary ends with an image of Ray Chapman‘s plaque from the old League Park stadium that went into storage and was found, and now hangs at the Guardian’s stadium in all its restored glory.

Here is your presale link to watch this documentary:  https://itunes.apple.com/us/movie/war-on-the-diamond/id1652796135

The post War On the Diamond is a new documentary to watch! appeared first on TalkNats.com.

War On the Diamond is a new documentary to watch!