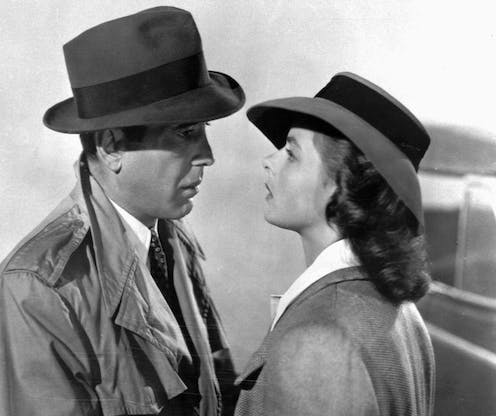 Watching Casablanca on its 80th anniversary, we remain in awe of its simplicity – and profound depth

In November 1942, a romantic drama directed by a Hungarian immigrant and starring an ex-naval officer and an obscure Swedish actress was released. The film began shooting without a finished script.

Many at Warner Brothers Studios thought the film would quickly disappear into obscurity.

It would end up winning three Academy Awards (for best picture, director Michael Curtiz, and screenplay), starred the iconic pair Humphrey Bogart and Ingrid Bergman alongside a host of recognisable supporting players, featured a lush score and evocative set design, and contained endlessly quotable lines. Its reputation grows and grows.

Casablanca has become one of Hollywood’s most beloved films.

A film of vivid moments

Casablanca is a heady mix of romance, cynicism, thrills and danger. Based on an unproduced play, Everybody Comes to Rick’s, the film mainly takes place in a night-club run by Bogart in the Moroccan city during the second world war.

Rick’s Café is where desperate refugees try to get hold of illegal exit visas to America. Complications – with Nazi officials and officious French bureaucrats – ensue.

One night, Rick’s old flame Ilsa (Bergman) turns up with her resistance leader husband in search of safe passage to the States. Cue the famous line:

It is full of vivid moments: Bogart and Bergman drinking champagne in Paris, Sydney Greenstreet in a fez, Peter Lorre trying to escape, Dooley Wilson sitting at the piano and singing THAT song.

Its production was fast-tracked to take advantage of the recent Allied invasion of North Africa. Casablanca was originally scheduled for an early 1943 release, but Warner Brothers capitalised on the resounding success of the US-led invasion, which in turn boosted box office receipts.

Casablanca would go into wide release on January 23 1943, to coincide with the Casablanca Conference, a strategic meeting between Winston Churchill and Franklin D. Roosevelt.

Casablanca’s clearest theme is that neutrality – whether in war or in love – is difficult to maintain.

At the outset, Rick is staunchly apolitical: he is jaded, unmoved by the refugee crisis unfolding around him.

But we also learn Rick has been involved in political causes, supporting losing sides against the Fascists in Spain and Ethiopia. The film traces that ambivalence through Bogart’s masterful performance. His cynicism gradually softens once Ilsa turns up, and his animosity to the Nazi chief Strasser grows.

This political about-face comes to a head in one of the greatest scenes in Hollywood cinema: the singing of La Marseillaise at Rick’s Café in full defiance of the Nazi officers belting out a German anthem.

It is a deeply patriotic and uplifting scene, and reminds us of cinema’s power to engage us, move us and make us cheer.

It also turns the night-club into a microcosm for the war, with it multinational clientele and the competing strands of partisanship, neutrality, aggression and political commitment.

For an America wary of entering the European theatre, scenes like this reminded audiences of the need to fight injustice, intolerance and belligerence.

Read more: Why do regrets over lost love often stop us being happy – and how can we move forward?

It is worth dwelling on Ingrid Bergman’s luminescent performance.

She plays the role of a woman who never displays where her romantic allegiances lie. Should she leave with Lazslo to America, or should she go back to Rick, and rekindle a love affair that ended abruptly in Paris?

The ambiguity in Bergman’s performance is due in large part to both a script that was constantly being rewritten and Curtiz’s indecision on how the film should end. But it is also a reminder of Bergman’s greatness.

The critic Roger Ebert once noted:

[Bergman] doesn’t simply gaze at [a man’s] eyes, as so many actresses do, their thoughts on the next line of dialogue. She peers into the eyes, searching for meaning and clues, and when she is in a close two-shot with an actor, watch the way her own eyes reflect the most minute changes in his expression.

Her scenes with Bogart exemplify this approach.

Many film historians argue Casablanca’s greatness is due to its “invisible” style: there are no flashy camera movements, or ostentatious cuts, or “look at me” acting.

French film critic André Bazin once famously attributed the success of Hollywood studio films to “the genius of the system”.

Films like Casablanca succeeded because they were made within a thriving ecosystem that placed storytelling, creative expertise, and cast and crew competence at the heart of its artistic practice.

And Casablanca’s script remains unbeatable. It’s worth remembering the lines of dialogue that have stayed with us ever since: “Here’s looking at you, kid”; “This is the beginning of a beautiful friendship”; “We’ll always have Paris”; and “Round up the usual suspects”.

Today, it ranks third on the American Film Institute’s 100 best movies of the last 100 years, and it is one of the most referenced films of all time.

Scholars love the film for its Freudian intertexts, while others see the title casa blanca – “white house: in Spanish – as a symbol for American foreign policy.

The Italian novelist Umberto Eco wrote Casablanca was "not just one film. It is many films […] it is a phenomenon worthy of awe”.

Watched today, we remain in awe of its simplicity, but also of its profound depth.

Ben McCann does not work for, consult, own shares in or receive funding from any company or organisation that would benefit from this article, and has disclosed no relevant affiliations beyond their academic appointment.

Watching Casablanca on its 80th anniversary, we remain in awe of its simplicity – and profound depth